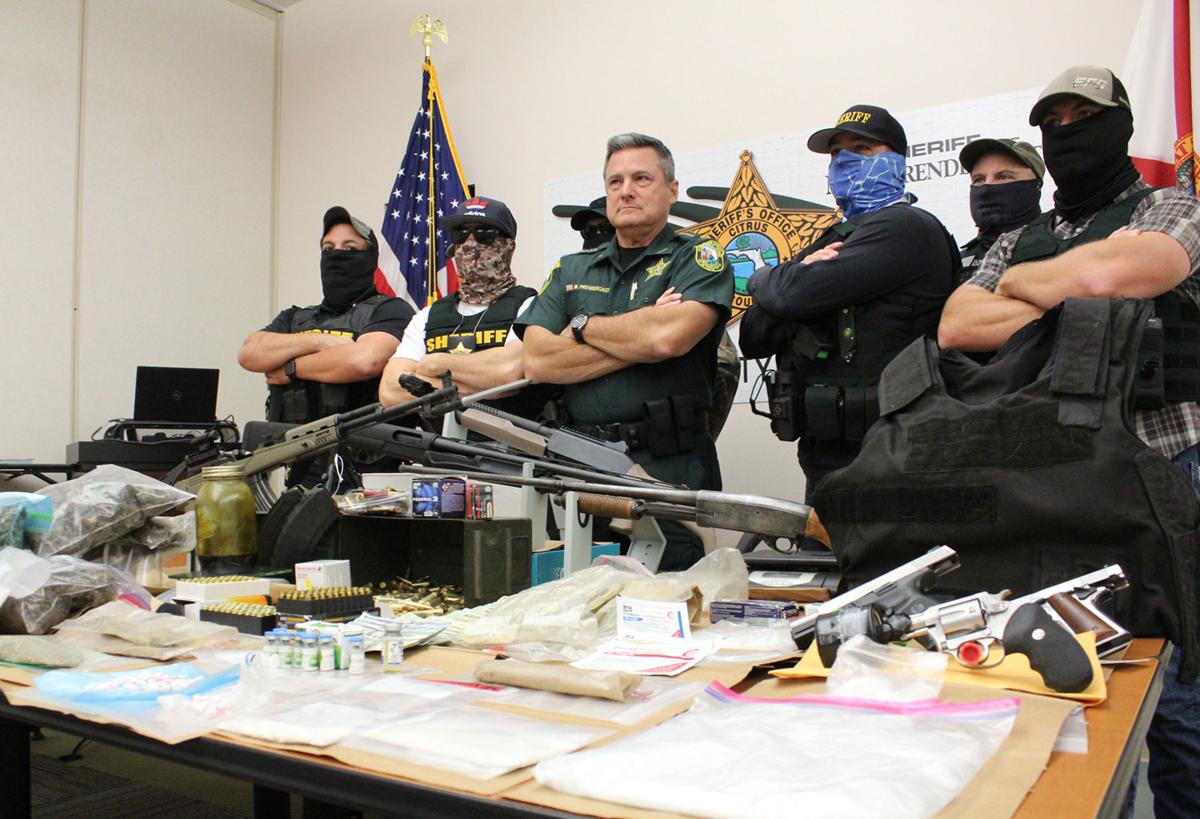 Sheriff Mike Prendergast as well as members of the agency's Tactical Impact Unit pose Friday morning in front of a myriad narcotics, weapons, cash and other items seized early Thursday after executing a search warrant following a traffic stop. 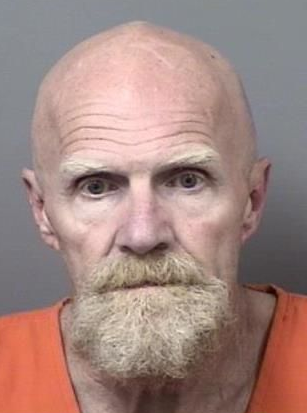 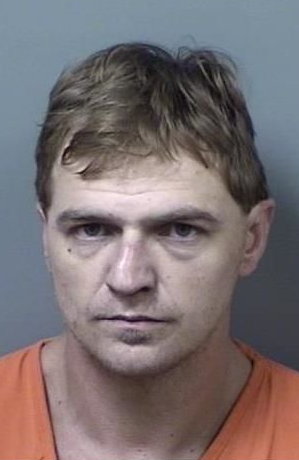 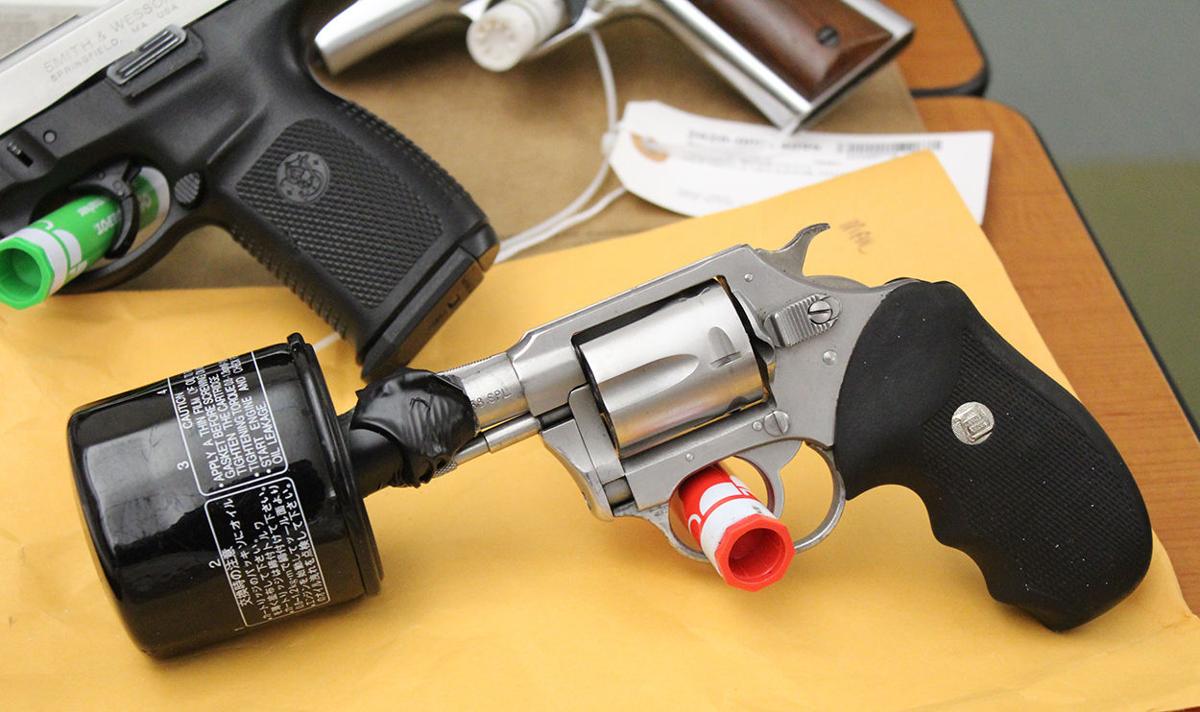 One of the weapons seized by law enforcement officials included a handgun with a homemade silencer, fashioned out of an oil filter. 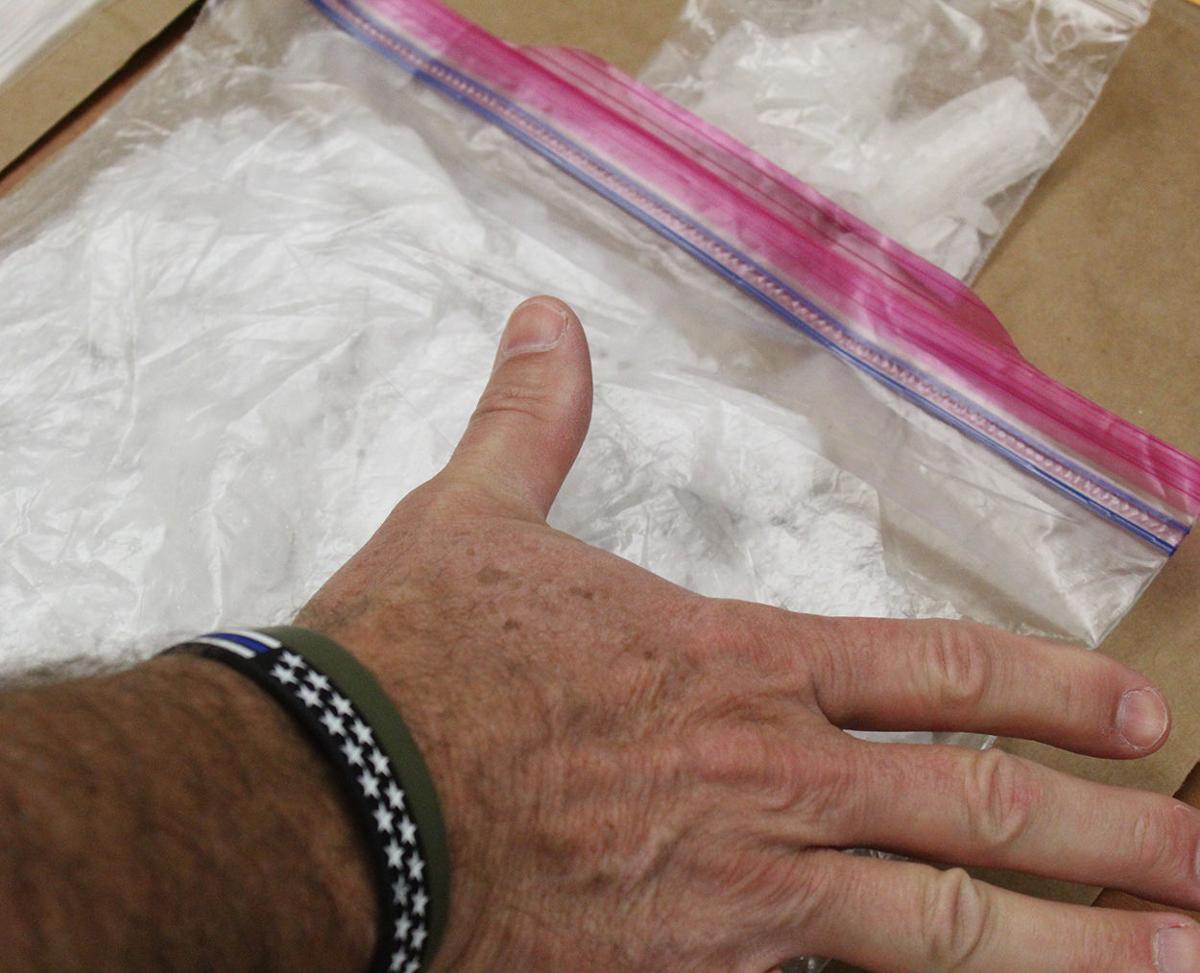 Sheriff Prendergast points out how several chards of crystal meth are as big as his thumb while he and undercover deputies showed off the items seized during a late-morning drug bust.

A routine Thursday afternoon traffic stop by a Citrus County Sheriff’s Office deputy led to the biggest seizure of methamphetamine and fentanyl in the agency’s history.

The 1 p.m. bust also took drugs with a value of nearly $131,000 off the streets, along with several firearms.

“This is the largest seizure of fentanyl and methamphetamine in Citrus County’s history. The amount of fentanyl seized could have killed hundreds of people,” said Sheriff Mike Prendergast. “My office is committed to keeping our citizens safe from these deadly narcotics.”

The arrest and subsequent raid at a Citrus Springs home began when Detective Mike Laborda stopped a red, 2011 Chevrolet Camaro when the driver, Ricky Lee Pope, 56, of Citrus Springs, didn’t stop at a stop sign on North Florida Avenue, outside of Dunnellon, according to arrest reports.

Next to Pope in the passenger seat was Justin Derrick Minor Pope, 32, of 1571 E. Sheridan Lane, Hernando. The two Popes were father and son, according to the Sheriff's Office.

Soon after the stop, Laborda called K9 Handler Deputy David Elias to the traffic stop with his partner, K9 Odie, according to arrest reports.

While Laborda was looking up information about Pope’s driver’s license, Elias deployed Odie to sniff around the car. Odie soon alerted his handler that drugs were in the trunk, according to arrest records.

Meanwhile, Laborda learned that Pope’s driver’s license was suspended. Ordering the driver out of the car, Laborda found a wrench socket in Pope’s pocket and looking as if it had been converted into a homemade smoking device. Pope lives at 9075 N. Arcadia Way, Citrus Springs, south of Dunnellon.

Confronted with the two pills, Ricky Lee Pope told deputies, “Those are just men’s pills for erections,” according to arrest records.

Meanwhile, Elias also searched the inside of the car and in a pocket on the back of the passenger car, he found a multi-colored, tin container. Inside the tin box, Elias found a plastic bag with crystal material inside that later tested positive for methamphetamine. Also inside was a plastic baggie that contained brown material that later tested positive for heroin, according to arrest reports.

When deputies arrested Ricky Lee Pope, Pope claimed to have a medical marijuana card, but could not produce it for deputies, according to arrest reports.

He was charged with five counts of possession of a controlled substance, possession of cannabis, less than 20 grams, drug paraphernalia, and tampering with evidence. His bond was $17,000.

But it would soon go much worse for Ricky Lee Pope, who is a three-time convicted felon, the Sheriff's Office told the Chronicle.

Meanwhile, Elias also found under the passenger seat, where Justin Pope was sitting, a lunch box, according to arrest reports. When Elias looked inside, he found Justin Pope’s wallet and other identification documents. But he also found a cellophane wrapper and inside 16 alprazolam pills and a baggie with crystal material, which later tested positive for methamphetamine.

The younger Pope said the drugs inside the box (next to his wallet, driver’s license and other identity documents), were not his, according to arrest reports. Deputies arrested Justin Pope and charged him with two counts of possession of a controlled substance. His bond was set at $4,000.

Inside the house deputies found a Smith and Wesson .40 caliber pistol, a .38 special revolver, an SKS assault rifle, two 12-gauge shotguns, and a .410 pump action shotgun, according to arrest records. Being a convicted felon, it violated Florida law to have the weapons in his home.

Deputies also found 6.15 pounds of cannabis in the home’s living room, 1.9 ounces of ecstasy, three fentanyl patches, 11 vials of steroids, and materials intended to be used to store or use illegal drugs.

The amount of confiscated drugs was greater than the previous Citrus County record in 2019 when law enforcement officials found just over one pound of methamphetamine.

“As I have said before, if you deal drugs in Citrus County, I am coming after you with my team,” Prendergast said. “I am grateful for the outstanding law enforcement work by everyone involved in this case and their relentlessness to arrest drug dealers like Ricky Pope so they are no longer a threat to our community.”

Ricky Lee Pope, the alleged owner of the most methamphetamine and fentanyl seized ever by Citrus County Sheriff’s Office deputies, was charged…

The question is not the great job by law enforcement. The question is WHY drugs are a major problem in such a small county? No job opportunities? Just sayin'

I also like the arms crossed, tough-guy poses. Pure theater.

What's going on with those guerrilla style masks? The militarization of the police force is not a good sign.

People move here for low crime. It seems it's not what it's cracked ( excuse the expression) to be. In Miami this wouldn't even make the news.

Our Sheriff has gotten so many drugs off the street and made Citrus County safer. When it’s time for the election he definitely has my vote! Both him and the TIU is doing awesome work!

What was the purpose of the home-made silencer? Why so many guns?

Thank you for another great drug bust by our Sheriff. Keep up the great work and stay safe out there. Definitely has my vote for