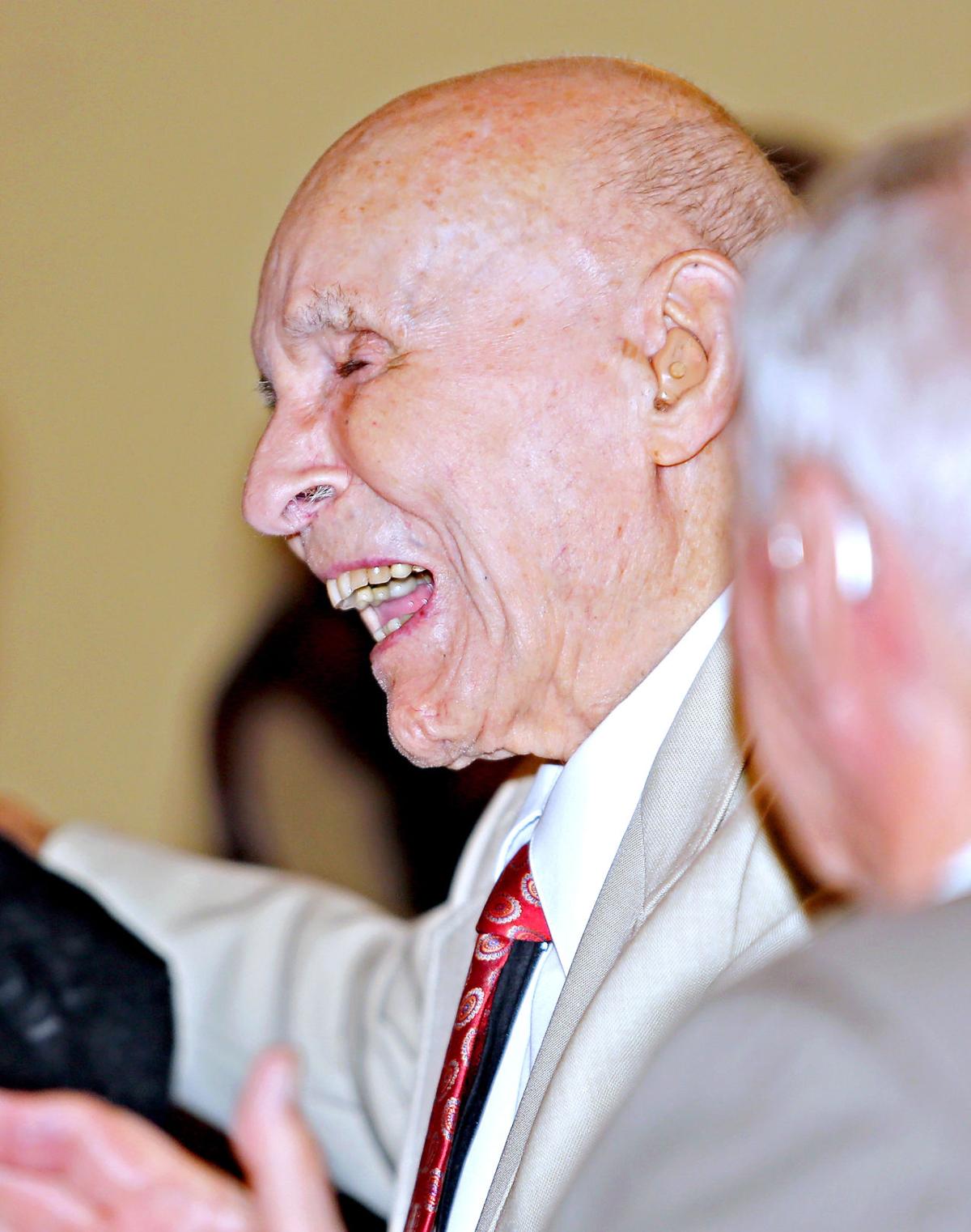 Ray Darling, winner of this year’s Citrus County Chamber Pillars Charles B. Fitzpatrick Heritage Award, is all smiles as he learns of his award. At 97 years of age, the presenters came to his table to present the award. The 2018 Chamber Pillars award banquet was held Friday night at the Black Diamond Ranch. 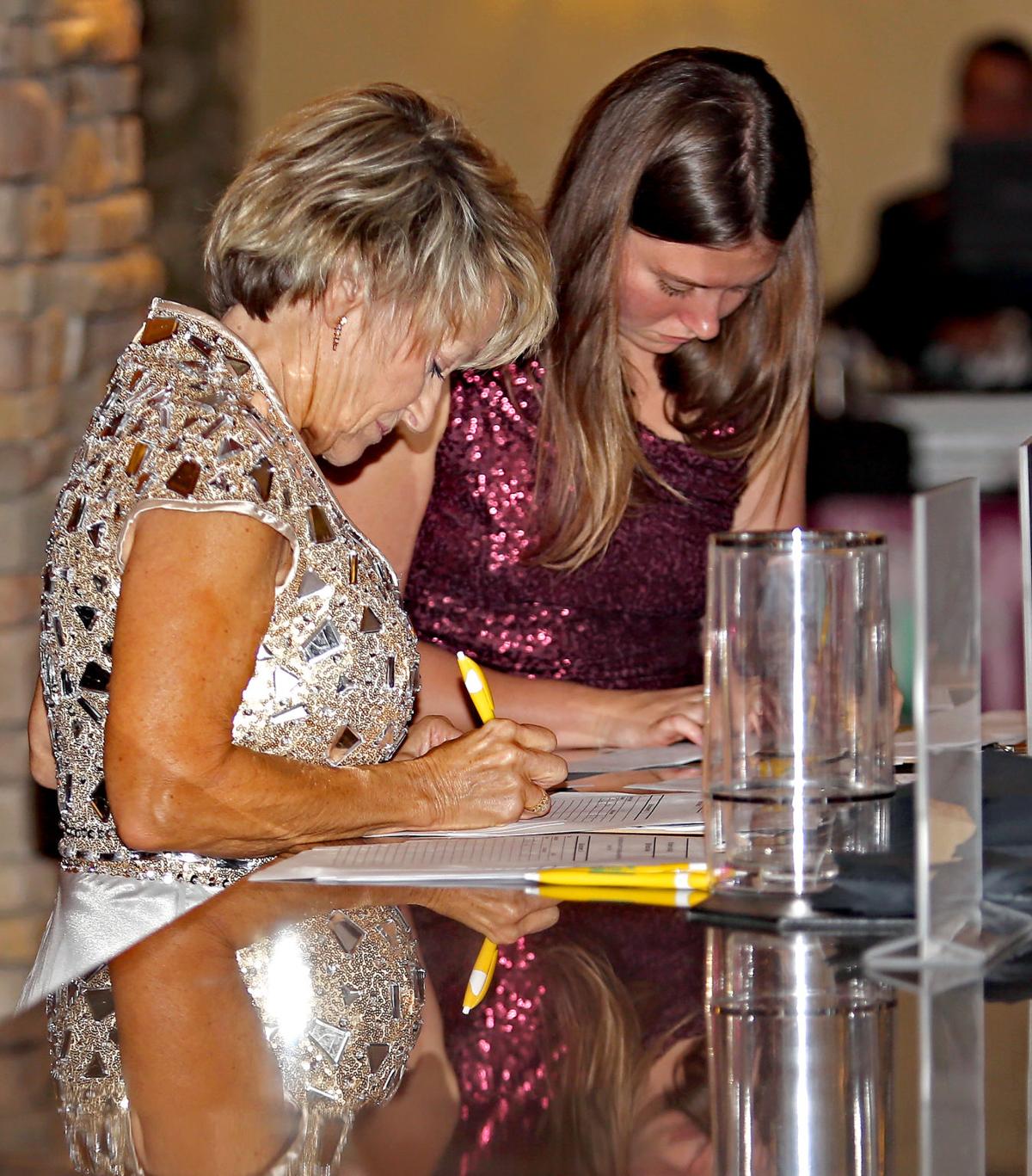 Ray Darling, winner of this year’s Citrus County Chamber Pillars Charles B. Fitzpatrick Heritage Award, is all smiles as he learns of his award. At 97 years of age, the presenters came to his table to present the award. The 2018 Chamber Pillars award banquet was held Friday night at the Black Diamond Ranch.

It was time once again Friday night for the annual Citrus County Chamber of Commerce Pillar Awards.

Held this year at the Black Diamond Ranch clubhouse, the event is a celebration of the people, businesses and nonprofit organizations that contribute in a positive way to the community.

All winners, except for two categories, were chosen from community nominations and chamber committee members. The Phil P. Royal First Responder Award was chosen by the Phil Royal Legacy board and the Altrusa of Citrus County Mamie L. Bass Award by that organization.

“(The award ceremony) is an opportunity for both the chamber and the community to recognize the value of so many of our businesses and individuals who have given so much to Citrus County every year,” said Ardath Prendergast, the chamber’s manager of operations and communications.”

This year, the chamber received about 30 total nominations.

Here are the 2018 Pillar Award winners with submitted bios:

In 1990, Ray Darling, at 70 years old, approached his Rotary Club and the Citrus County school superintendent to create the Upward Bound program recognizing less-than-A students working hard and making progress to improve themselves and their academic achievement. Today, Upward Bound is a thriving program that has affected the lives of thousands of students.

During his tenure with the city, Jim Farley has been instrumental in Crystal River’s growth as a community to be proud of. He succeeded in getting it accredited as a Tree City, promoted the city’s support of Crystal River Main Street and has doggedly pursued the Riverwalk, phase one of which was just completed and dedicated last month.

Peyton Burdette “has always been a global thinker, more worried about the world around her than about herself. Her strong foundation of faith has allowed her to become a vibrant, confident, young lady who approaches life with a positive attitude and disposition when coming in contact with those around her.”

She is a student leader at Lecanto High School, class president, and president of the YMCA Youth in Government program-LHS Chapter.

Jean Grady joined the Business Women's Alliance in 2013, has served on luncheon and scholarship committees, and is the chair of this year’s Women’s Health and Fitness Expo. She is well known for her hard work, dedication, and huge heart.

Grady is a Realtor at Century 21 J.W. Morton. She was a “multimillion-dollar producer” her first year and doubled those sales this past year.

Ambassador of the Year -- Barbara Donohoe

In honoring Barbara Donohoe with the Ambassador of the Year award, these comments  were offered: “An ardent supporter of all things chamber. As an ambassador, she is committed to doing a certain number of ribbon-cuttings and other activities, but for her, the bare minimum is not enough.”

In honoring Jonathan Rossi with the Mandi Warren Richards Rising Star Award, these comments were offered: “Becoming a homeowner at the age of 18, it is evident he has always worked hard to follow his dreams. Saving to open his own business, his career quickly moved forward, starting as an attendant at Citrus Regal Cinemas, a salesman, paintball field operator, a legal assistant and a waiter at Chili’s pulling the night-shift.

“In 2013 he earned the title of entrepreneur as he opened a business in Ocala. Success was budding with an additional two offices opening in Lecanto and Gainesville within three years, currently employing five people."

Of Cregg Dalton and Michael Anger receiving the Phil P. Royal First Responder Award, these comments were offered: “Deputy Michael Anger and Sergeant Cregg Dalton significantly improved the lives of this family, especially the children, after such a tragedy and during the holidays. (They) provided the family with donations of $10,000 worth of grief counseling services, payment of the entire funeral to include the coffin, cremation services and burial at the Florida National Cemetery; electric and mortgage payments for six months.”

What about the Altrusa award presented last night? Is the winner not note worthy?