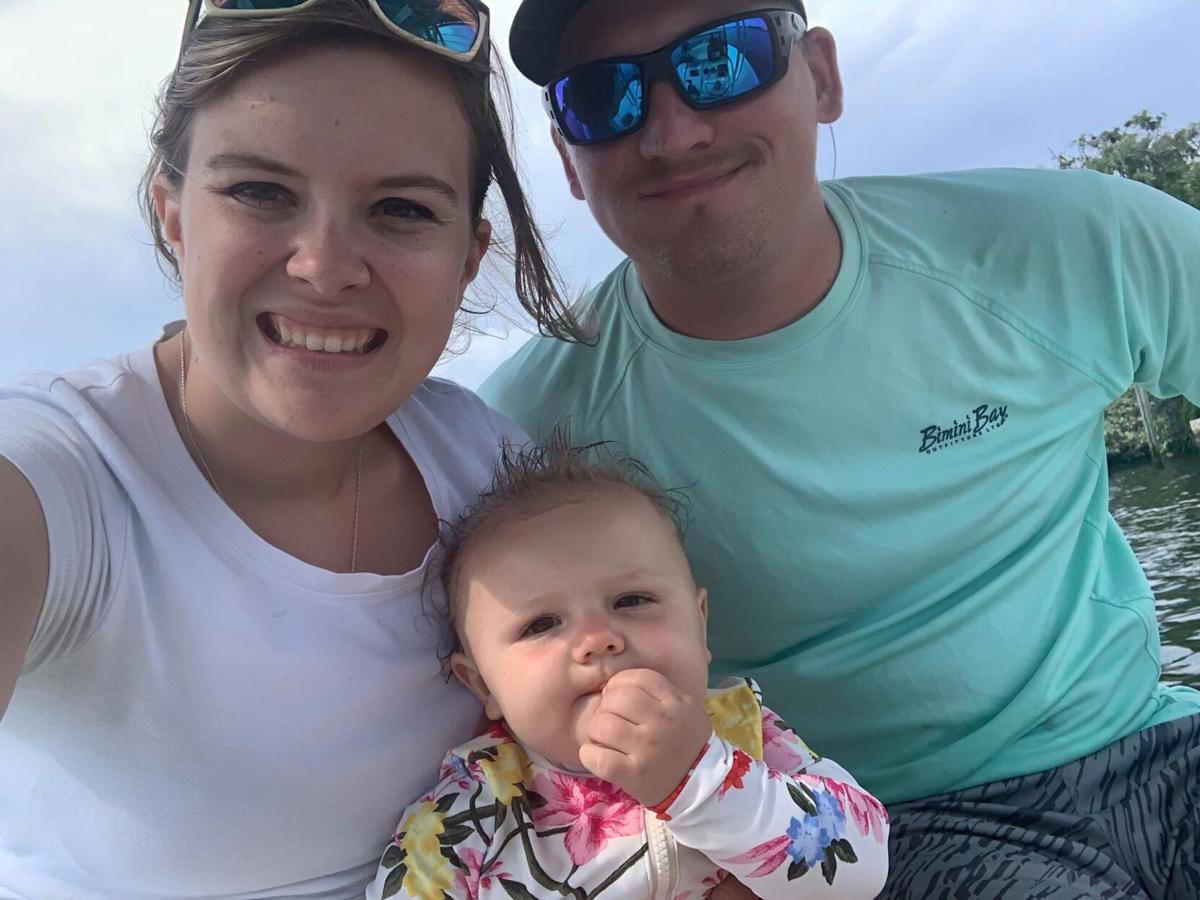 A Sunday adventure for the Hise family, Tiffany, left, and Justin with their daughter, Kyleigh, almost 11 months old, turned into harrowing situation when their truck slipped into the water after pulling their boat out of the water. Thanks to Justin's actions and those of several bystanders, they were able to get their daughter out of the back seat of the truck before it sank. 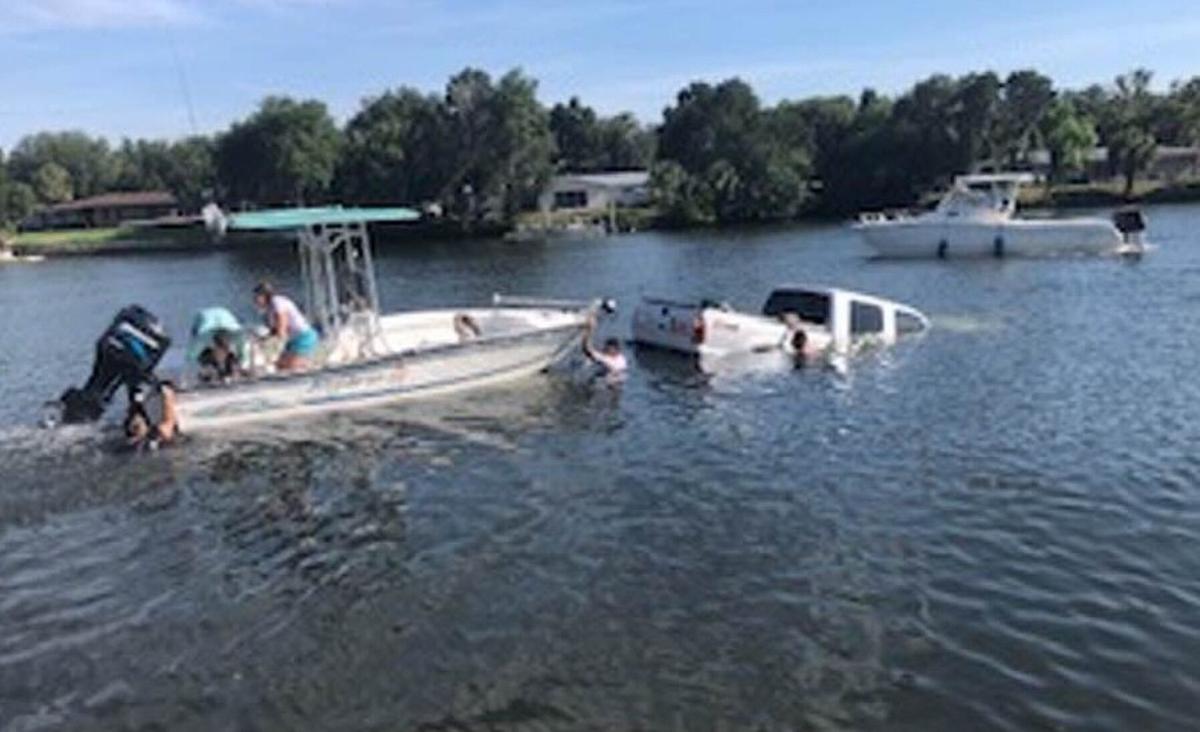 The Hise family's truck as it sinks after rescuing their daughter from the back seat. 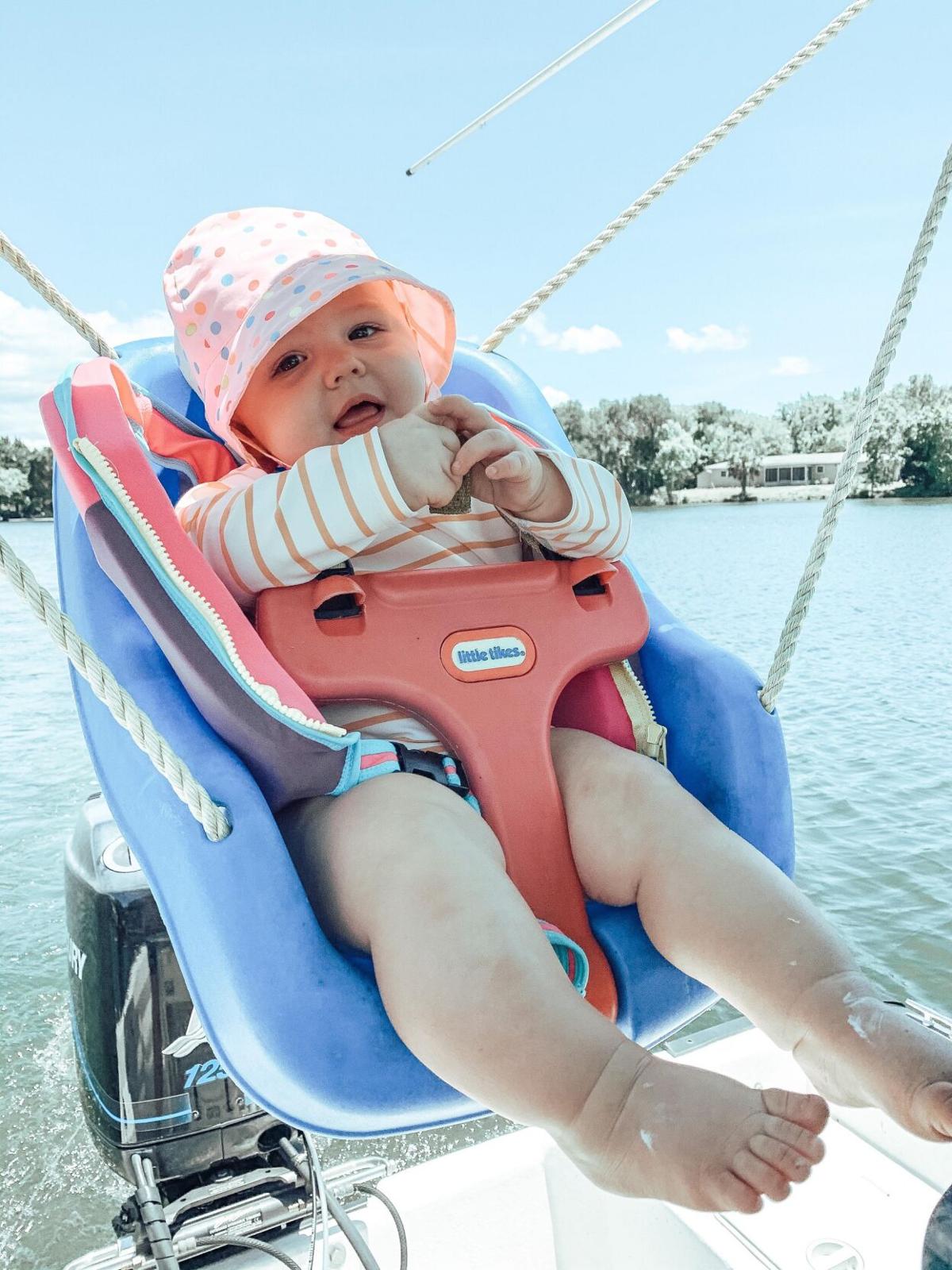 Kyleigh Hise had a baby swing set up in the family boat.

It was a typical Sunday for Justin and Tiffany Hise as well as their almost 11-month old daughter, Kyleigh, as the trio spent the day on the water in and around King’s Bay.

But as the family made its return to the boat ramp, the day would turn from typical into harrowing.

Justin on Sunday, May 31, 2020, had backed the family truck down the boat ramp behind the Day’s Inn Resort in Crystal River, as his wife, Tiffany, watched from close by. Justin put the truck in park, engaged the emergency brake and locked the tires into 4-wheel drive. “The whole 9 yards,” Justin added.

Justin then cranked the boat on the trailer and as soon he stepped off, “everything” started sliding into the water. Justin got drug under his truck as it descended into the water, but he “fought out” from underneath and got to the driver’s door, before getting wedged between the dock and the driver’s side door.

“I was standing on the dock watching it happen,” Tiffany said.

Then the panic set in.

“I just started screaming, ‘my baby is in there, get my baby, get my baby,’” Tiffany recalled. “I was just assuming (the truck) was going to stop.

As Tiffany leapt into the waters, Justin had broken free from being pinned between the dock and the driver’s side door and had made his way to the front of the truck. Tiffany, in the meantime, had made her way to the family boat.

The Hise’s, however, discovered they weren’t alone as a trio of bystanders — Shay Woodside, Garrett Watt and Herb Hurley — had sprung into action.

“Thank you,” the Hise’s said, with Justin adding: “To be honest, they’ll tell you, I was extremely calm, I didn’t do a lot of talking, there was business to be done and there was no room for error.”

Justin had planned to bust the window out with a bar he had, but by the time he planned to react, Woodside had grabbed a chair and shoved it through the back window.

“The window broke pretty clean,” Justin said. “(Kyleigh) was, for the most part, unscathed. As soon as I appeared through, she stuck her arms straight out at me, she knew I was coming to get her.”

Woodside and Hurley were further down the parking lot at the boat ramp when they heard people screaming. The pair ran down to the boat ramp to see what the commotion was all about.

Watt had been out with family and friends and just pulled out in front of the Hise’s. He was unpacking items and preparing to leave for the day when he heard people yelling. Watt and his friend, Dylan Buzbee, and others ran over to the water. Watt said as soon as he realized it was Justin Hise and his wife, a family he’s known his entire life, he wanted to help out even more so.

Watt got the Hise’s to put the child in a life jacket and hand her to him, as Justin climbed into the water. He helped both of them swim to shore when he went back to help Tiffany. Upon getting them all back to shore, Buzbee’s wife, Kelly, a nurse examined the toddler, wrapped her in a towel and got her to calm down, Watt said.

“Instinct mode just kicked in,” Watt said about providing help. “It’s just instinct, you get that kid or whoever. You can replace the truck, the other items you lost, but you can’t replace a person. It was a very scary day.”

Both the Citrus County Sheriff’s Office and Crystal River Fire Department had been dispatched to the scene, but by the time first responders had arrived, the toddler had been safely removed from the truck, which along with the boat trailer, had sank.

Watt, like the other good Samaritans who helped out, have been hailed as heroes.

“I don’t see myself as hero, but that’s just the way I was raised,” said Watt, who works at Crystal Automotive. “I’d hope the same thing would be done for me.”

To use the word “hero,” Woodside said, is overdoing it.

“I did what anyone I hoped would have done in that situation,” he explained. “I think afterward about the things that could have gone wrong … I’m no hero, I would like to think anyone would have done the same thing considering the circumstances. Regardless of who was in the vehicle, we would have done whatever we could to help as best we could.”

The Citrus County Sheriff's Office intends to recognize the citizens for their valor, according to a sheriff's office spokeswoman.

"We thank them deeply for their bravery," said Jodi Sanders, agency spokeswoman.

Thanks, the family said, probably doesn’t do the justice it deserves for those who assisted the couple.

“Thank you very much for all of your help,” Justin stressed. “At that point in time, it was nice to have someone there to assist bust that window out.

Justin got his daughter to the boat, where his wife helped put their toddler into a life jacket. Justin, however, began swimming back to the dock with his daughter. But with exhaustion and the adrenaline wearing off, Garret Watt, was the one who helped make sure Justin and his daughter stayed above water.

“After all of my stressing, I realized how much energy I exhausted,” Justin said.

Despite the rough weekend, Tiffany Hise said, the family is “all good.”

“It seems like a blur now,” she said. “I just remember my husband and the other gentleman got her out, handed her to me, handed her off to him on the boat. Then he handed the baby to Garrett.”

The one valuable lesson Justin and Tiffany have learned from this weekend’s event.

“Just make sure your children aren’t in the vehicle, just take every precaution you can … things can take a turn even if you’re as careful as possible,” he explained. “With all of the experience we have, it still happened.”

Both admitted they’re gun shy about putting a boat in the water in the near future but anxious to get over their newfound fear.

“That’s a fierce passion of ours, I don’t want that to ruin it for us,” Tiffany said.

“I am (anxious) to go boating again, stuff like that is going to happen, it’s just one of those freak things that happens,” he said. “I’ll be glad to put my boat in the water again.”

It certainly won’t happen at the same location.

“I’d be lying if I told you I will go to that ramp,” he admitted. “To be honest, I don’t think I’ll ever go put back in at that ramp again; it’s not a happy memory.”