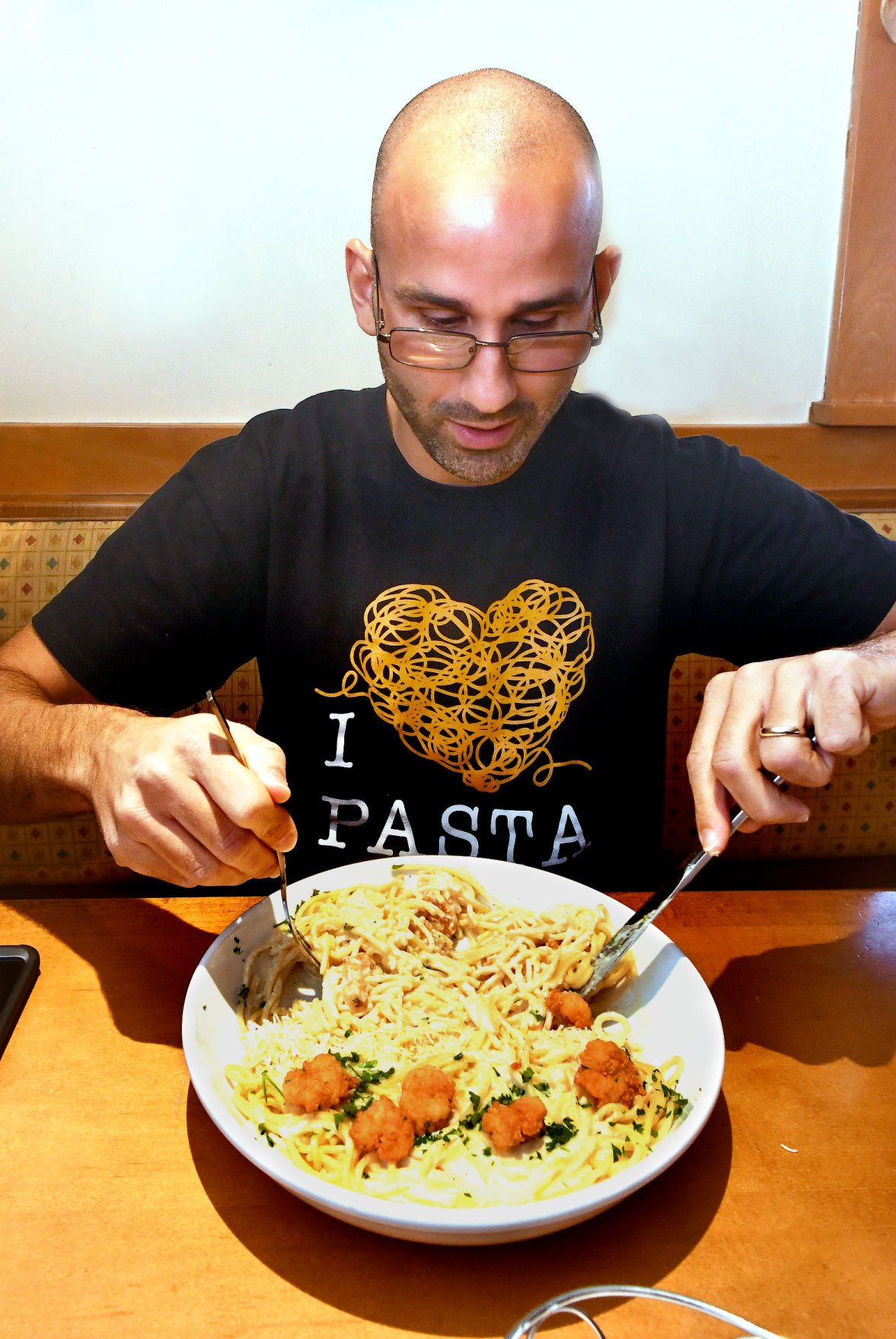 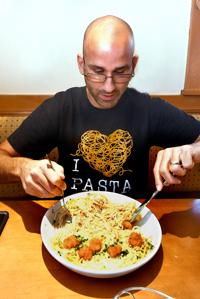 Jeff Berman sits down for his 131st consecutive Olive Garden meal Friday morning. Utilizing his Pasta Pass, he has logged meals in 36 different restaurants across five states, including the Inverness location. 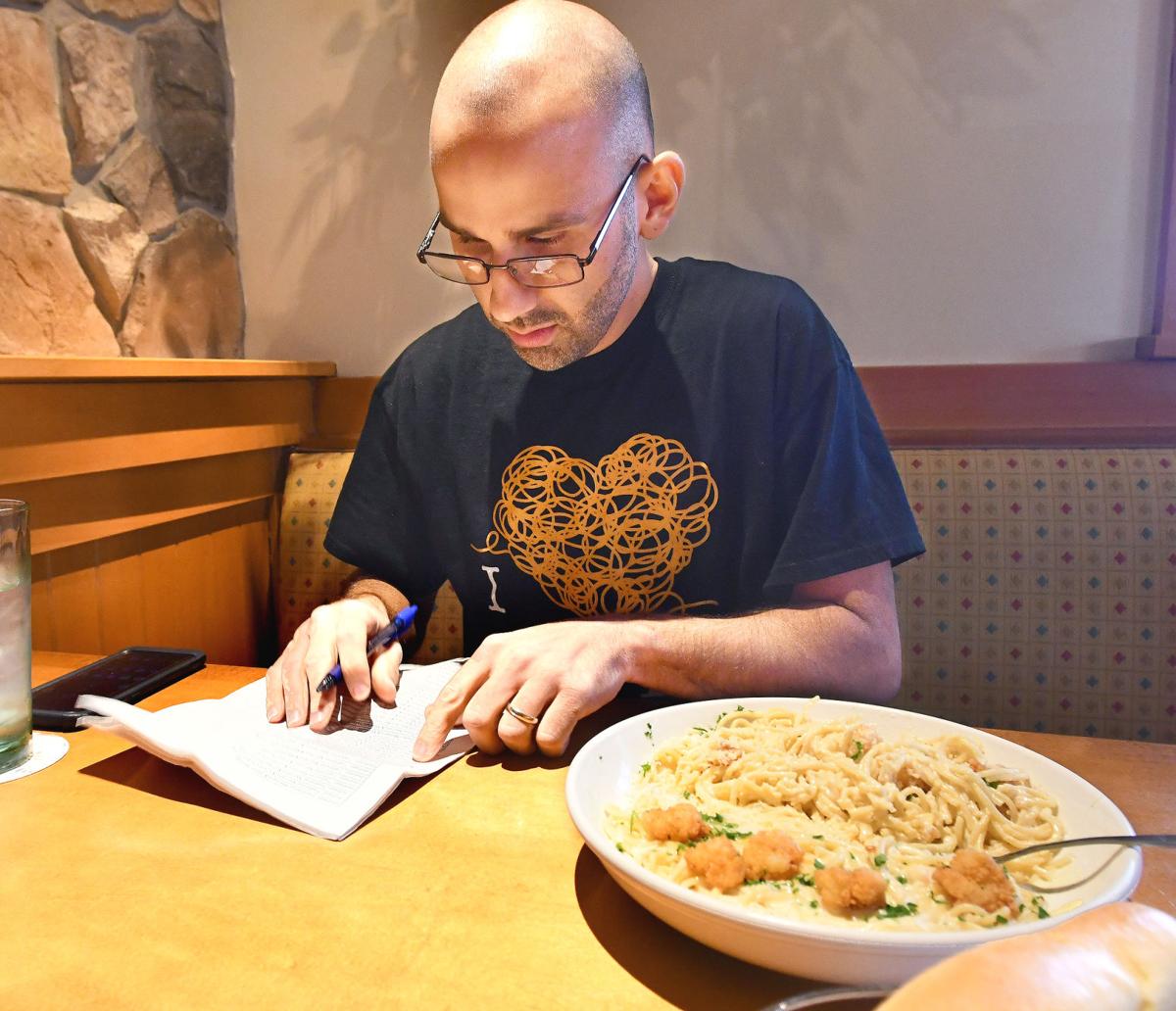 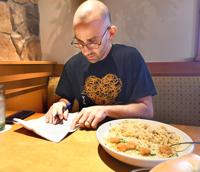 When asked if Jeff Berman has gotten tired of pasta, he responded: “No, not at all. I do a different meal every time I visit.” Above, Berman logs his meal, which consists of spaghetti and Alfredo sauce topped with shrimp.

Jeff Berman sits down for his 131st consecutive Olive Garden meal Friday morning. Utilizing his Pasta Pass, he has logged meals in 36 different restaurants across five states, including the Inverness location.

When asked if Jeff Berman has gotten tired of pasta, he responded: “No, not at all. I do a different meal every time I visit.” Above, Berman logs his meal, which consists of spaghetti and Alfredo sauce topped with shrimp.

Jeff Berman calls himself just a guy who likes pasta.

He likes it so much that he has eaten pasta at the Olive Garden at least three times a day for 56 days straight.

For $100, each Pasta Pass card entitled its holder to eat unlimited pasta, plus soup or salad and breadsticks, at any Olive Garden restaurant nationwide for eight weeks from Sept. 25 to Nov. 19.

This year, the passes went on sale Sept. 14 and sold out in less than one second, according to information from the Olive Garden.

A self-described “foodie” and “diehard Olive Garden fan,” it was a dream come true for him — with a catch.

Earlier this year he had lost 70 pounds and had worked too hard just to gain it all back with eight weeks’ worth of Fettuccine Alfredo.

So, even before his first bowl of spaghetti and meatballs, he did the math and set strict rules for himself:

Also, he would continue to exercise and weigh himself every day.

“Back in February, I weighed 220 pounds,” he said. “After trying all kinds of diets I tried the math approach — eat less and exercise. So, I got an Anytime Fitness membership. Also, after a 13-year hiatus, started running again.”

“I use an app, ‘Lose It,’ and since Feb. 13 of this year I’ve tracked every single calorie I consume,” he said. “So, in doing the Pasta Pass, my mindset was, ‘Can I really eat at Olive Garden every meal without gaining weight?’”

He set up a website (8weeksofpasta.com) to document his progress and rate every meal; he designed a T-shirt; had cards printed up, and set out on a quest for pasta nirvana.

“I like a little adventure, so I also decided I’d go to as many Olive Gardens as possible,” he said. “I’ve visited 36 across five states.”

It helps that he works at home as an IT contractor for the Department of Defense so his schedule is flexible.

Another rule he set for himself: He would not duplicate a meal.

“If you do standard math, there’s 252 variable combinations — type of pasta, sauce and toppings,” he said. “However, if you’re very creative, you could technically do more than 3,000.”

He ate three times a day, at 11:30 a.m., 4 and 7:30 p.m. — except on his “Tour of Orlando” day when he challenged himself to eat seven meals at seven Orlando-area Olive Gardens in seven hours.

And yes, he knows how ridiculous it is to be so laser-focused on eating pasta.

“It’s incredibly ridiculous,” he said. “You can’t do something like this without being silly.”

Take his themes, for example. Each of the eight weeks had a theme, with week one being “Testing the Waters” where he tried every pasta, every sauce and every topping to see what he liked.

During “50/50 Sauce” week he mixed two sauces together. In “Stickwich” week he made sandwiches using breadsticks and sauces and toppings. “Soupendipity” week featured soup and breadsticks for dipping.

And then came “Make Me Shrimpy” week.

“To get back down to 153, I focused on lower calorie meals using the Crispy Shrimp Fritta,” he said.

About a month into his pasta adventure, Berman learned of Alan Martin, a pastor in Burlington, North Carolina, who had gained notoriety in 2014 by setting an Olive Garden record eating 115 pasta meals in 49 days — and losing four pounds.

“Looking at my stats, I realized I was really close to the record without even trying,” Berman said.

He confirmed it with Jessica Dinon, Olive Garden publicist, and told her, “I’m totally going to beat that, and not only that, I would like to have my record-breaking meal with Alan.”

On Sunday, Nov. 12, at the Olive Garden in Burlington, North Carolina, the two men met and ate pasta together.

“We spent a couple hours talking about our pasta adventures and found that we’re kindred spirits,” Berman said. “Who else gets this excited over pasta?”

Their story was even featured in the Wall Street Journal, the Huffington Post and a number of other media outlets.

“We know our fans have so much passion for pasta, and the way Jeff and Alan came together totally epitomizes it,” Dinon said.

On Sunday, the final day of the 2017 Pasta Pass, Berman met up with other pass holders and family at an Orlando Olive Garden for what Berman dubbed “The Last Supper.”

They ordered every appetizer on the menu plus a giant pumpkin cheesecake, and Berman had a bowl of fettuccine with asiago garlic alfredo and creamy mushroom sauce topped with crispy chicken fritta.

After 56 days and 140 pasta meals, he is down 2.2 pounds and up an experience that allowed him to meet a lot of new people and eat more pasta than he ever imagined he could.

Next on his to-do list: Run the Space Coast Marathon, his first marathon, on Sunday, Nov. 26.

“If anyone wants to know what I’m eating for lunch today,” Berman said Monday, “I’ll give you a hint: leftovers.”

EIGHT WEEKS OF PASTA BY THE NUMBERS