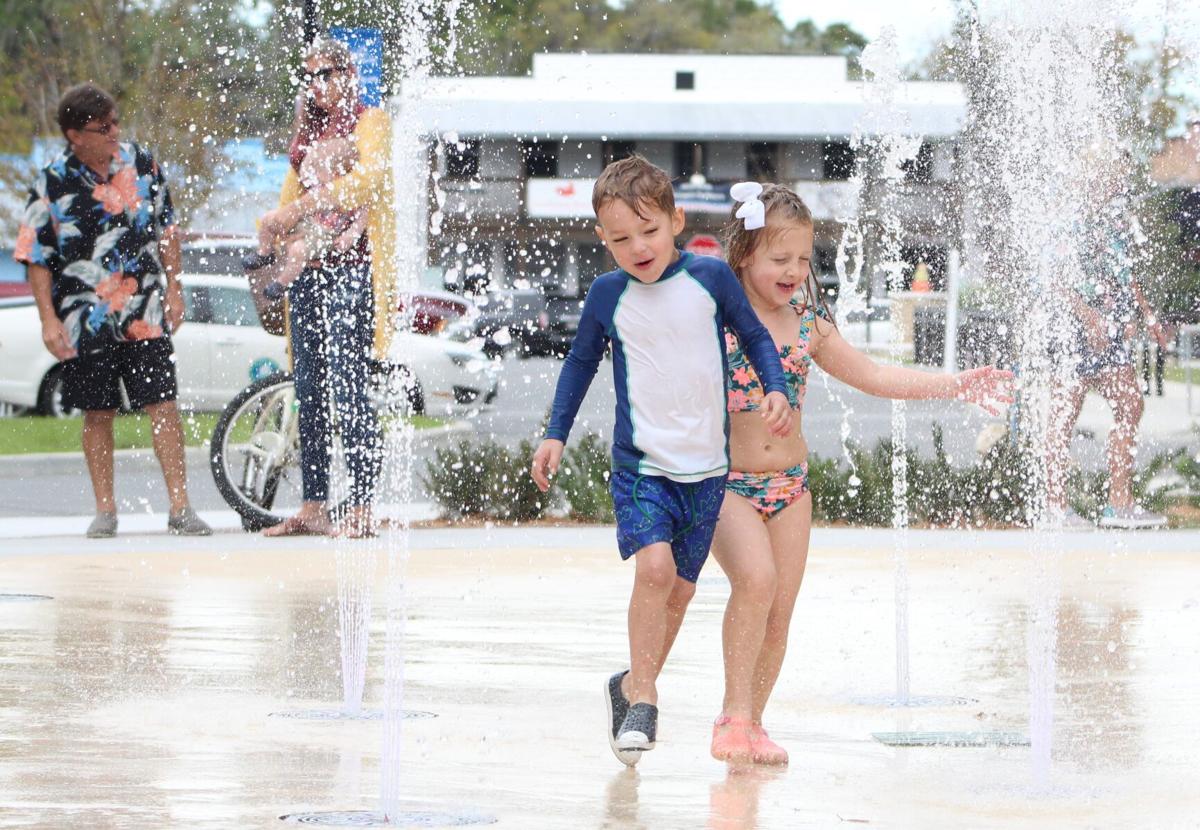 Four-year-olds Thomas Bleakley and Charlotte Bolin run through the newly constructed Crystal River Splash Pad on Friday, Nov. 12, as city officials hosted a unique "ribbon cutting." The venue opens to the public Tuesday, Nov. 23. Thomas is the the son of Meredith Linley, executive director for Crystal River Main Street, and Charlotte is the daughter of Leslie Bolin, the city of Crystal River's events and marketing director. 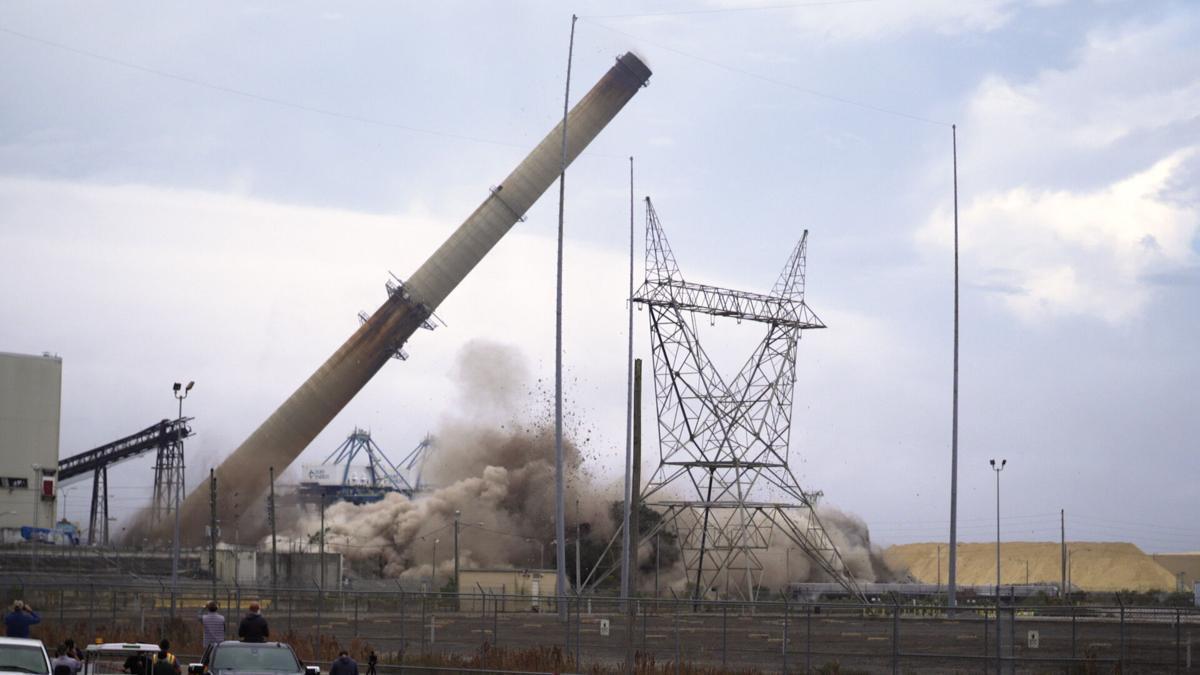 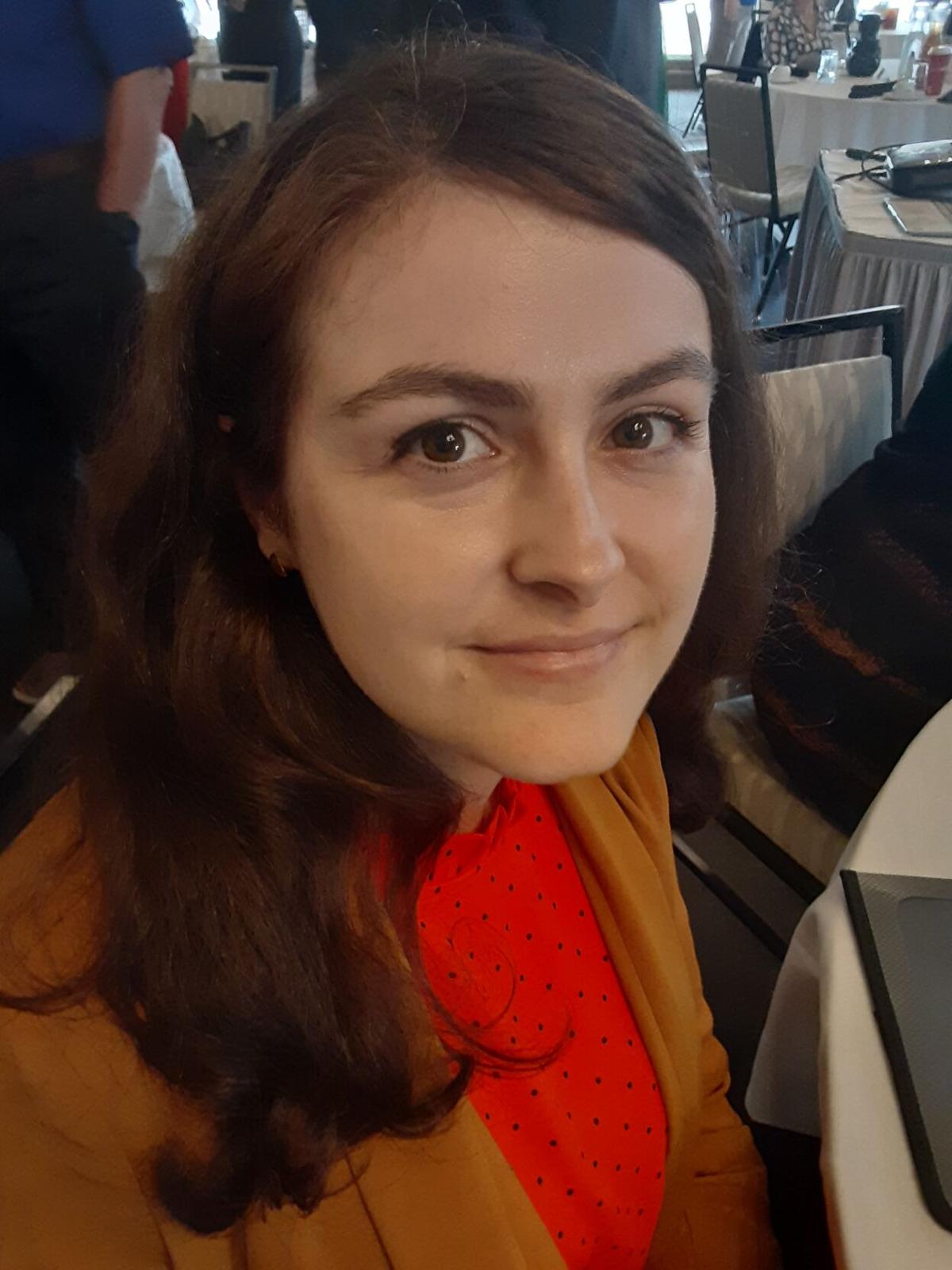 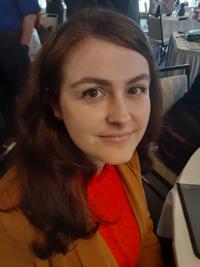 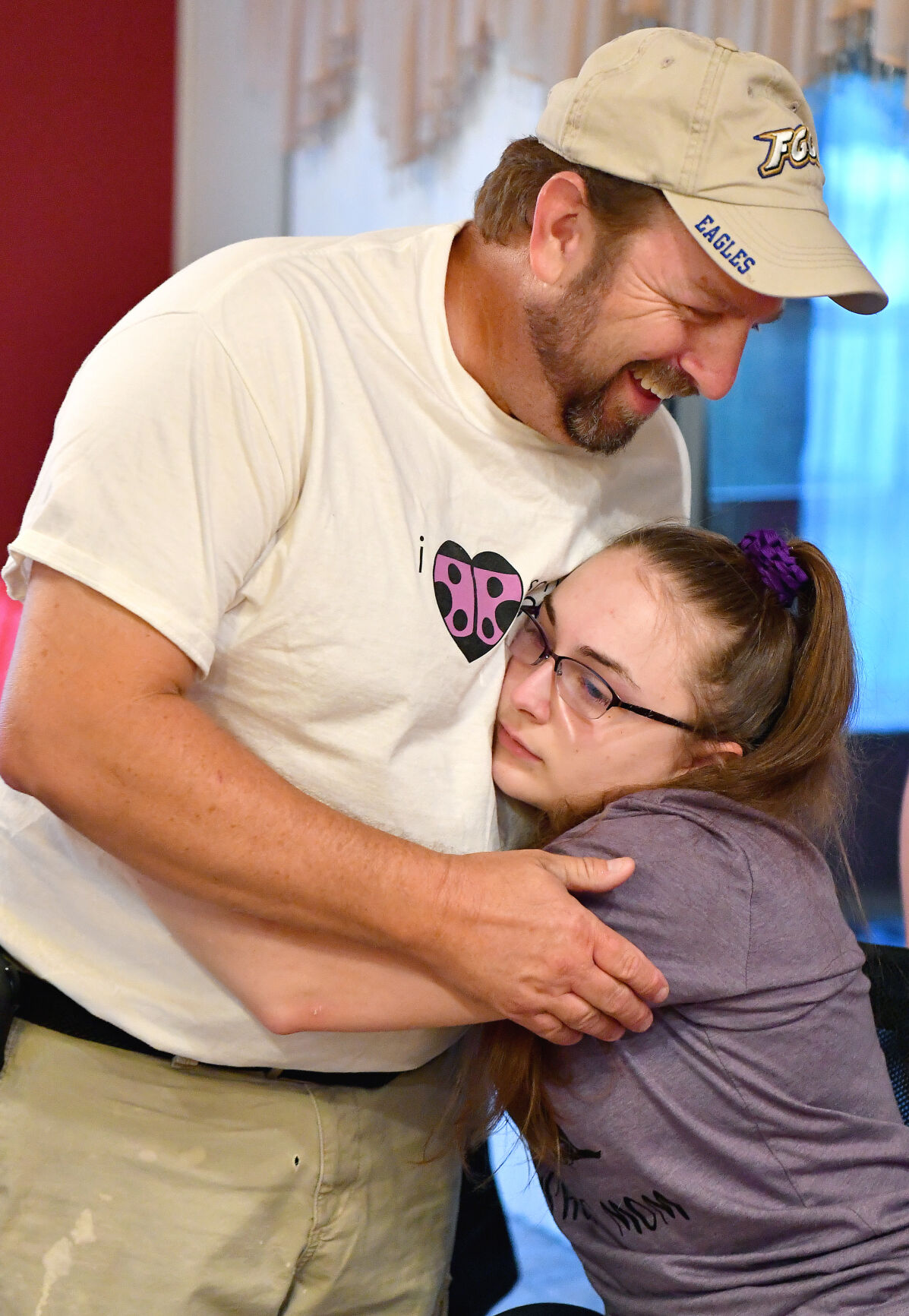 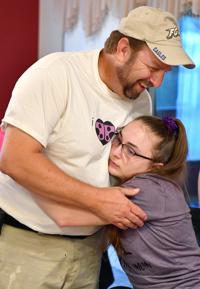 Sixteen-year-old Maegan Haganey hugs her father James, Tuesday, Nov 9, before beginning her homework in the family kitchen. The teen suffers from a type of epilepsy known as Rare PCDH-19 Clustering Epilepsy requiring specialized care. After Maegan worked through a difficult afternoon her father was able to calm her and refocus her on the task at hand, homework.

After conceptualizing the idea around four years ago, Crystal River unveiled its Splash Pad Park the morning of Friday, Nov. 12, next to its water tower on the northeast corner of Northeast First Avenue and Northeast Fifth Street.

Nov. 23 is the first day the park opens to the public.

Along with Crystal River's Town Square and Riverwalk, this park makes up another component of the city’s plans to better weave the business and amenities along Citrus Avenue.

“Today, it’s become a reality, and I’m just so excited to be here,” City Manager Ken Frink said, introducing observers of the park’s soft opening. “What you see now is the next phase in turning downtown Crystal River into a destination for all the state to come and enjoy.”

A foggy morning delayed the end of an era, but it ended nonetheless as more than 350 explosives with a force of about 300 pounds imploded two 500-foot-tall stacks at Duke Energy’s Crystal River coal plant in Citrus County on Saturday, Nov. 13.

While many cheered when the earth rumbled as the stacks came down, some were somber, as they said farewell to a friend that reliably served Floridians for more than 50 years, said Heather Danenhower, Duke Energy spokeswoman.

One hundred percent of the steel, copper and other metals, along with the concrete, will be recycled.

According to Cory Weaver, director of operations for CareerSource Citrus Levy Marion (CLM), the pandemic not only changed people’s lives, it also affected the workforce in ways that may have a lasting impact in the way employees and employers co-exist.

The data shows that Citrus remains a commuter county. The majority of employees (24,939) live here but work out of county; 18,138 live and work here; 13,046 work here but live elsewhere.

Weaver said many employers are having trouble finding employees because many of them are looking for new careers and learning skills to better their financial status.

Pirate’s Cove, a pristine 3.6-acre site with 750 feet of water frontage and abuts an existing park, has sat idle since the restaurant/motel on it was destroyed by the 1993 no-name storm and later demolished in 2010 — and the county wants to buy it.

However, a recent bid of $616,000 to buy the Pirate’s Cove property off Ozello Trail has been rejected.

“The seller has decided to decline it,” local Realtor Steve Varnadoe advised the board. “The price and undefined terms just doesn’t interest her at this time.”

County Commissioner Jeff Kinnard remains hopeful a deal can be made if it includes private support.

“Obviously, there will need to be a significant amount of private money to come into this,” said Kinnard, the board’s strongest supporter of the county buying Pirate’s Cove. “People who want to see this property preserved as a public park — those are the folks we’re going to need to step up and help out.”

Every day is a battle as teen suffers with rare, debilitating form of epilepsy

April Haganey describes her daughter Maegan’s condition this way: It’s like someone with dementia or Alzheimer’s plus teenage hormones.

Maegan Haganey, 16, suffers with a rare form of epilepsy called PCDH19. She had her first PCDH19 seizure at 13 months. The Chronicle has been following her since she was 9.

For most of her life, Maegan and her family have lived in a state of perpetual waiting, waiting for the next seizure or cluster of seizures.

Besides painful headaches and an all-over body soreness, the seizures affect her memory and, over time, have severely affected her cognition.

“Sometimes we’ll start seeing our ‘old kid’ shining through, but then she’ll regress,” April Haganey said. “At one time she was in gifted classes at school, but now she’s in a special needs class with a special curriculum and a bunch of accommodations. Now, after a seizure, she can’t walk or talk or swallow very well.

“But we have our faith, and there’s joy in the people we’re surrounded by, and there’s always hope that they’ll find a cure for this,” she said. “They (researchers) know so much, but there’s still much to learn.”

Hot topic of the week: The news that the county’s bid to purchase Pirates Cove in Ozello was rejected prompted people to comment on the Chronicle Facebook page. Here’s what some said:

• Karissa Gandee: “Good. The county doesn't need to buy any more land, especially since they can't afford to maintain boat ramps and want to raise taxes to ‘pay for roads.’ Proper budgeting doesn't look like not being able to afford the responsibilities you already have, asking for more money from people, and then spending 600 thousand dollars unnecessarily.”

• GiGi Galasso: “How about leave it alone?”

• Letta Alexander: “The county can leave it alone but it’s for sale and eventually it will sell. So I see it as preserved as a park or developed into condos or a hotel. Either will increase traffic. Choose your poison carefully.”

• Laura McKee: “Saying we don't need a park is not looking forward to the future. Maybe we don't right this moment, but future generations will need more parks. Look at the growth we're experiencing. That isn't bound to stop anytime soon. More important things should have been budgeted all along. And there will still be crumbling roads 50 years from now, but there won't be much room to add more waterfront parks.”

• Wanda L. Lynch-Sentz: “The traffic on Ozello Trail is getting crazy ... with all the traffic on U.S. 19, more accidents are happening. I have lived here since the 90’s and so many people run that light. Could you imagine a hotel or park at the end of that winding road and the traffic that it would generate? No thank you for now.”

Quote of the week: "I really felt the Lord was giving me a gift of letting me know we're all on the right track with this.” — Commissioner Ruthie Schlabach after learning two donors gave $515K toward the construction of a new animal shelter, a project she has been fighting hard for.

Good news item of the week: The NFL is coming to Inverness. At a recent Inverness City Council meeting it was announced that the National Football League’s flag football program will be utilizing Whispering Pines Park for some of its teams’ training and games.

The NFL’s flag football program has more than 1,600 teams and more than 500,000 youth athletes ages 4-17 participating in the program across the country.

“This is a pretty big deal for Whispering Pines to get something like this,” Inverness Parks and Recreation director Woody Worley told the council. “(And) it brings more people into the park.”

For questions and information about registration, contact league organizer Jason Grace at 352-302-7591 or alissagrace@yahoo.com.