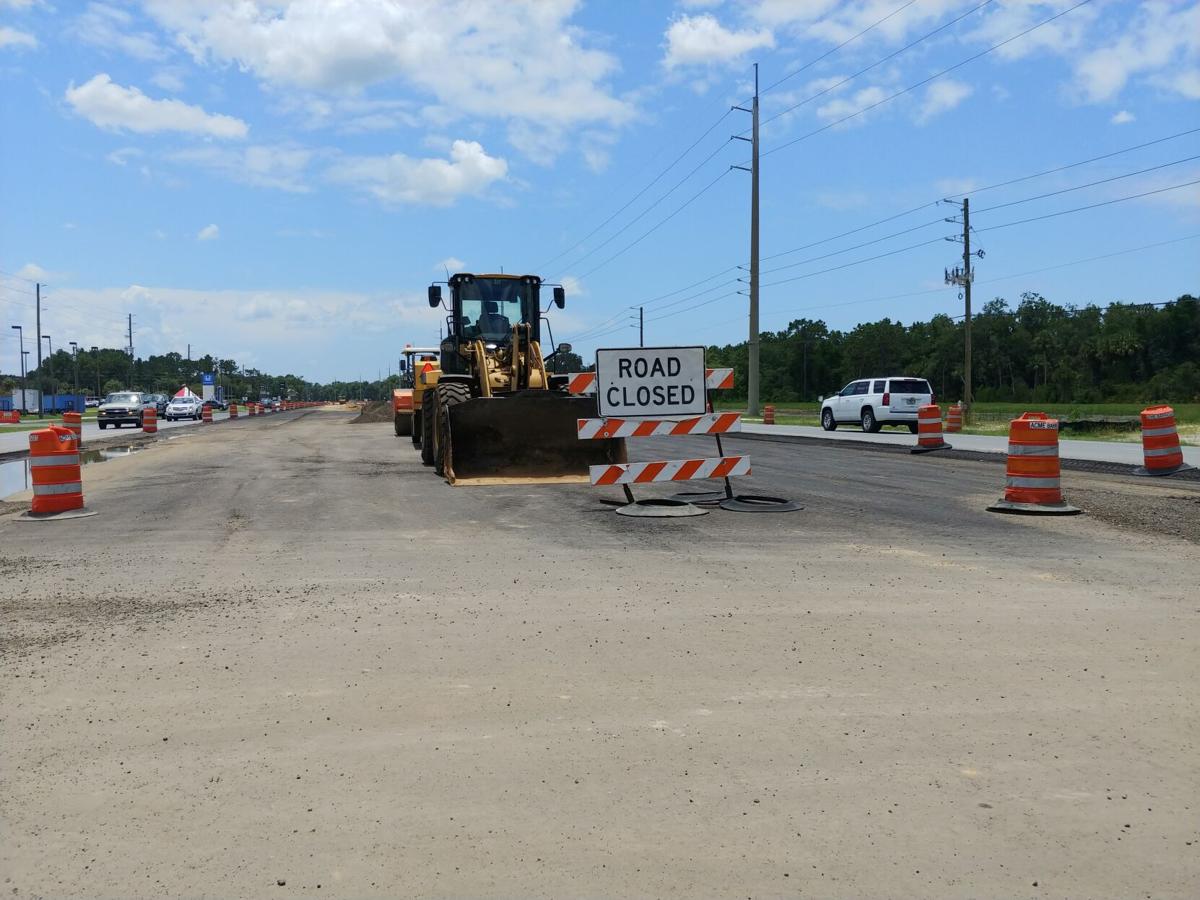 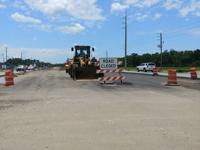 D.A.B. Constructors equipment sits idle and empty in the median of U.S. 19 near Homosassa. The company went out of business and FDOT has started taking steps to clean up medians and remove barrels. The agency is also working on a faulty drainage system. 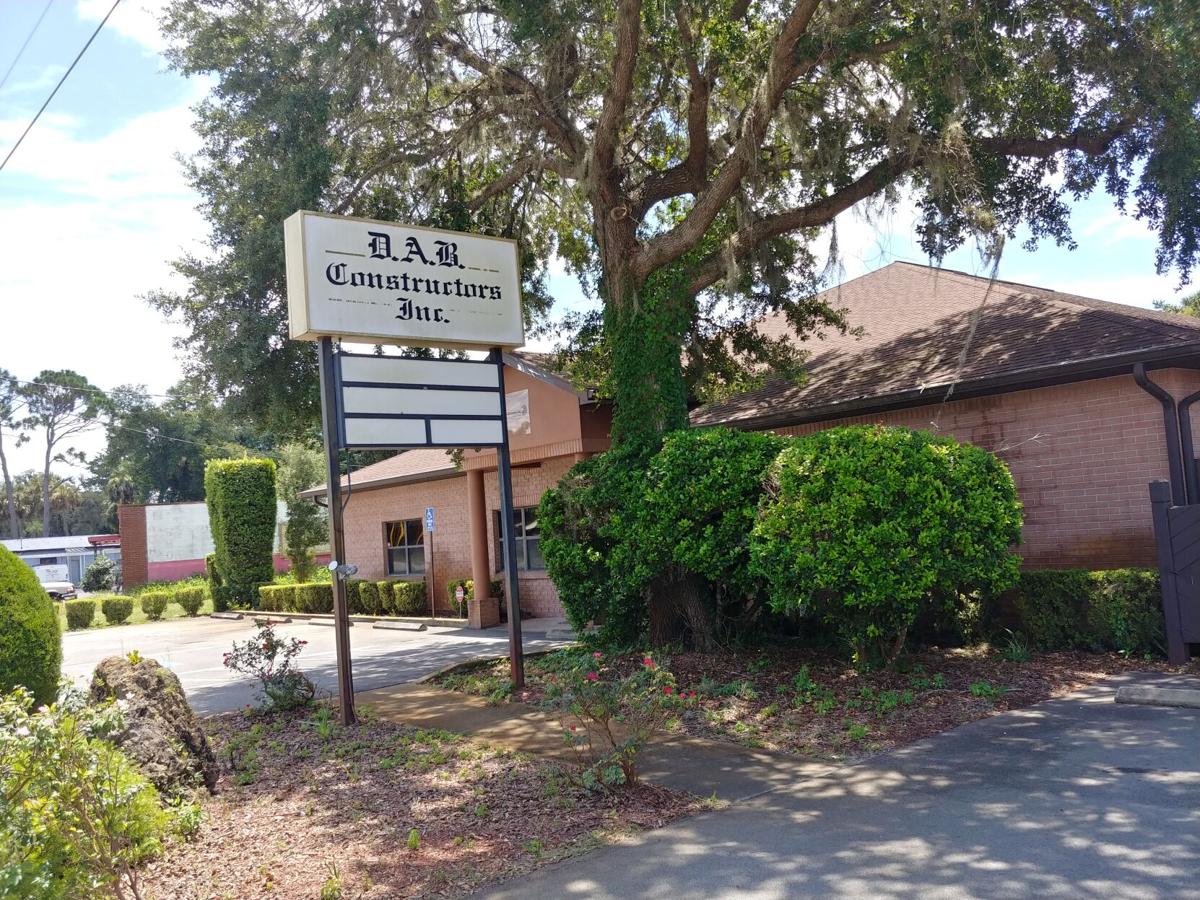 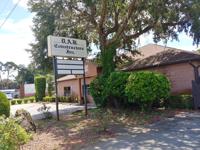 The D.A.B. Constructors office in Inglis was locked Monday, the day the company announced it was closing.

D.A.B. Constructors equipment sits idle and empty in the median of U.S. 19 near Homosassa. The company went out of business and FDOT has started taking steps to clean up medians and remove barrels. The agency is also working on a faulty drainage system.

The D.A.B. Constructors office in Inglis was locked Monday, the day the company announced it was closing.

D.A.B. Constructors, which has tens of millions of dollars in state and county road projects including U.S. 19 widening in Crystal River and Homosassa, has closed its business doors in Inglis over a dispute with the state, the company said.

All ongoing projects will be placed with D.A.B.’s bonding companies to bring in other firms to complete the work.

“We very much regret the inevitable inconveniences to the traveling public as D.A.B.’s ongoing jobs are transitioned to others for completion,” the statement from D.A.B. owners Debora and Bill Bachschmidt states.

The fate of the company’s 400 employees was unknown.

County and state officials were caught off guard by the company’s announcement.

“DAB has closed their doors and this has been confirmed…” he wrote.

Florida Department of Transportation spokeswoman Kris Carson said Monday morning she was unaware of D.A.B. closing but was looking into it. Later Monday, she would only say in an email that the state wasn’t notified of any changes with D.A.B.

“The department will continue to monitor their progress on contracted projects,” Carson wrote.

D.A.B. has a $3.4 million Citrus County contract to resurface neighborhood roads. The county commission on Tuesday was expected to formally extend the contract from June to September after numerous work delays, though County Administrator Randy Oliver said the item may be tabled.

County Engineer Brian Kauffman said D.A.B. picked up its equipment Friday in Citrus Springs and didn’t show up for work Monday. He said, however, it isn’t unusual for the company to take its equipment off site since the resurfacing program isn’t centered in a single location.

Kauffman said D.A.B. notified the county in a July 20 letter that Bachschmidt’s son, vice president Foster Bachschmidt, was no longer with the company.

The company has experienced numerous delays in recent months.

State officials defaulted D.A.B. in June for delays on an interstate interchange project in Pasco County, and warned D.A.B. about delays on projects in Citrus County. The widening of U.S. 19 in Homosassa is over a year past due and remains unfinished.

D.A.B. blamed Florida Department of Transportation over what the company called a “15-month tug-of-war” with FDOT over design errors related to a $33 million “diamond” interchange at I-75 and State Road 56 in Pasco County.

The state said D.A.B. in June defaulted on the Pasco project after the company missed milestone deadlines and abandoned the job.

“We suffered a classic domino-effect, as our acceleration efforts had diverted resources from other ongoing projects and drained the company of millions of dollars such that operations cannot be sustained,” the statement reads.

U.S. 19 widening projects in Citrus County have also faced delays. The widening in Homosassa is a year past schedule and still not complete; recently, construction barrels showed up blocking a left turn lane at Halls River Road with no road work to follow.

D.A.B. has the contract to resurface neighborhood roads in Citrus County, which was scheduled for completion in early June. The county agreed to delay the contract until Sept. 5, and added another 11.5 days to the contract for rain delays, Kauffman said.

Kaufmann said 57% of the resurfacing is completed, and that D.A.B. expected to finish on time with the new deadline.

Located just across the Levy County line, D.A.B. has been a leading road builder for 33 years. It employs 400 people, and company officials did not provide information Monday as to whether they’re still drawing a paycheck or not.

D.A.B. off the pace on county, state road projects

Citrus County commissioners expressed shock and concern on Tuesday with news that D.A.B. Constructors Inc. had closed its doors and stopped al…

State: Up to 3 months before U.S. 19 work restarts

U.S. 19 construction should pick up again in about two or three months following an Inglis company’s decision to abandon state highway project…

I hate to see this happening . this is not good for anybody , but it sure seems like DAB bit off more than they could chew and choked on it.

They will probably re open for business under a new name. BAD construction, perhaps.

DAB has been a steady political donor to Citrus County politicians for some time including the now Mayor of Crystal River and former Commissioner Joe Meek. They "grease" palms with regularity...to the detriment of their customers...

Not surprised at all, look at the past.

Glad to see Mike mentioned the campaign contributions. Through DAB and his family members, they have donated $39,000 total to the five current commissioners. This is over two election cycles and can be verified through the SOE website at votecitrus.gov. Covid had nothing to do with DAB problems as they have been ongoing way before the pandemic. He had Jeb Bush flown in by helicopter when Jeb was running for governor. Paid off...he got the contracts for the turnpike work and had delays back then.

DAB donated to former Commissioners and other politicians. Mayor Joe Meek of Crystal River received several political donations from this failed contractor... He did as well when he was a Commissioner.

Anyone surprised? From the beginning the ability of D.A.B to do the job was a big question. There has been a D.A.B. help wanted sign in front of the RaceTrack gas station on 19 & Homosassa Trail since the work began. Did D.A.B. ever have enough people and equipment to fulfill it's contractual obligations? Sure doesn't look like it. And why, in spite of the US 19 delays and subsequent excuses was D.A.B. awarded the contract to repave county roads? Does anyone wonder if the statement that D.A.B. officials were prolific contributors to our county commissioners had anything to do with it? This situation has been a mess from day one. And like the Halls River Bridge near fiasco, residents have to put up with the unsightliness and inconvenience, not to mention the dangerous driving conditions. Just remember this, among other things, next election cycle. It's high time for some serious changes here in Good Ole' Citrus County.

GSo, now can we pick up the barrels blocking the lanes on 19 at Grover Cleveland and Halls River Road??? - Please

Pres. of Dab Corp., Foster Periccuoli who used to live in Levy County

Foster died a few months ago. The Obit was in the Chronicle. Foster is

time. Back a few years & before Debbie married. Her son's name is Foster,

(35-40 yrs old) whom was mentioned leaving the company.

They say he goes by a nickname name Foster Perry (Pericciooli)

That's all we know.

How much of the Citrus County contract has been prepaid?

What kind of bonding has been done?