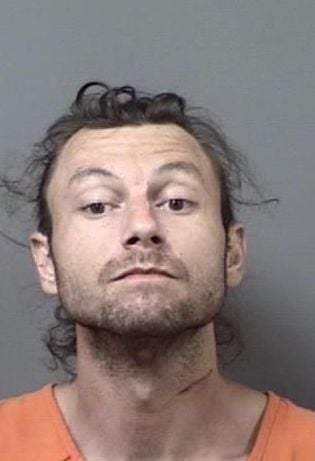 Editor’s Note: This story was updated with comments from the Citrus County School District and information from court filings.

A homeless man from Crystal River was arrested Wednesday morning for trying to steal a water bottle from a school bus and its crew who were feeding children.

After 31-year-old Edwards ignored their commands to stop while walking away from them, deputies detained him in handcuffs.

School district workers giving out student breakfasts and lunches from the parked bus told deputies Edwards asked them for a bottle of water, and was told he couldn’t, according to his arrest report.

Since mid-March, because of campus closures due to COVID-19, the school district setup drive-thrus and bus stops where school-aged children and their families can pickup food and beverages.

School district spokeswoman Lindsay Blair said Thursday afternoon there is no bottled water on the buses that transport packaged meals, just juice for the children.

Edwards then ran to the back of the school bus, reached into its open door and tried to get into a cooler, which was shut closed by school staff before Edwards could get anything.

In an interview with deputies, Edwards admitted to asking for water and peeking inside the cooler on the school bus, his arrest report shows.

Deputies arrested Edwards on charges of burglarizing an occupied conveyance and disrupting a school function. He was jailed under a $15,500 bond.

At Edwards' first appearance in court, a judge lowered his bond to $5,500, court records show. Edwards' arraignment was set for June 16.

What's happening to this country when a person, a human being, is thirsty and is refused a simply, stinking bottle of water. I hope you self-proclaimed Christians and I use that word loosely, I'm very proud of yourselves. It starts from the top down, doesn't it?

Nestlé Waters pumps millions of gallons of water for bottling from Florida springs. Nestlé pays nothing for the water. This is deemed ok. The idea of Social Justice is lacking in our government.

Where is the Compassion and Empathy? This is a really poor example for children. They could have handed the man juice and a meal and told him he needed to move on.

Ditto to most of the above comments. We all need to take a hard look inside and pull out some compassion. We've all made mistakes, so who are we to judge someone else? Even if the man has a drug record, as one person commented, he has a SOUL, just as we all do. Compassion that day could have turned this man's life around. Who's to say it would not have? We're at a critical time in man's evolution...We're all connected; everything we do affects others...WAKE UP!!!

The guy is a convicted criminal with multiple theft/ drug charges. he should know not to steal.

Where is the information on criminal history?? The story makes it sound like attempted theft at most.

Couldn't one of our fine Deputies have taken him to get a drink instead of taking him to jail and charging him with a Felony that stays on his record for life. Perhaps the deputies involved need more training in the Humanitarian area.

Really, why waste taxpayers money on this non theft??? At most why not charge him with some misdemeanor?

Shame on the deputies and the judge. Drug dealers in Citrus County get lesser charges and smaller fines.

I understand the lunches were for the school children. I feel they should of offered him a free lunch and sent him on his way

Terrible! The man was obviously hungry and thirsty. Give him a meal and water and send him on his way. He was not hurting anyone and he asked first! This is horrible!

ridiculous....everyone needs water to survive..a bottle of water?? what the heck?

A bottle of water?

Rather than give a thirsty man a fifty cent bottle of water the workers and she tries found it necessary to spend thousands in incarceration and court proceedings. I've seen child molesters bond out for 2 grand and this guy is at 15k over a bottle of water. Disgraceful.

Did he get Judge Howard?

Now he'll refuse bail and get 3 squares a day as long as he's in jail. And the worse thing is he'll be charged with is a misdemeanor. Cool! Smart guy!

This is so sad. Give the man a bottle of water. Geez. What is wrong with people? I know, they were following their rules. Someone could have helped him.

I totally agree with you. Please show some compassion. All he wanted was a bottle of water.. This case should be dropped!! The poor man was thirsty and did ask first.