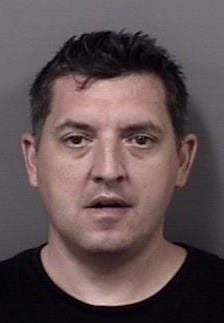 A 42-year-old Crystal River man faces a series of charges after causing a traffic wreck July 9, 2020, in the area of North Citrus Avenue and West Emerald Oaks in Crystal River, according to a Citrus County Sheriff’s Office arrest report.

Jason Michael Perry was charged with one count each of driving under the influence (DUI), DUI with serious bodily injury and DUI with property damage. His bond was set at $22,000.

While responding to the wreck at around 3:27 p.m., Perry's arrest report stated, sheriff’s deputies were notified about a reckless motorist driving a gold in color Toyota sedan.

Upon arrival, deputies saw a gold Toyota Camry with the same plate number provided by the witness who made the call to 911.

After completing his crash investigation, Deputy Dale Johnson determined Perry was at fault and conducted a driving under the influence investigation, according to the arrest report.

During one of the exercises, Perry failed to count his steps aloud, stepped off the line, raised his arms to maintain his balance, failed to turn and took the incorrect number of steps, his arrest report stated.

Johnson stopped the exercise and demonstrated it again to Perry, who, again, stepped off the line, did not count aloud and improperly turned, counting to seven while walking back.

On his final task, Perry turned his back on Johnson, walked to the deputy’s patrol car and failed to turn around to listen to more instructions, the report stated.

Johnson then arrested Perry and transported to the Citrus County Detention Facility.

Once at the Citrus County Detention Facility, Perry agreed to a Breathalyzer test. His blood alcohol content results were 0.00% on two different attempts, according to the report.

Perry provided a urine sample, which was turned over to the Florida Department of Law Enforcement to be analyzed. Results are pending, the report noted.