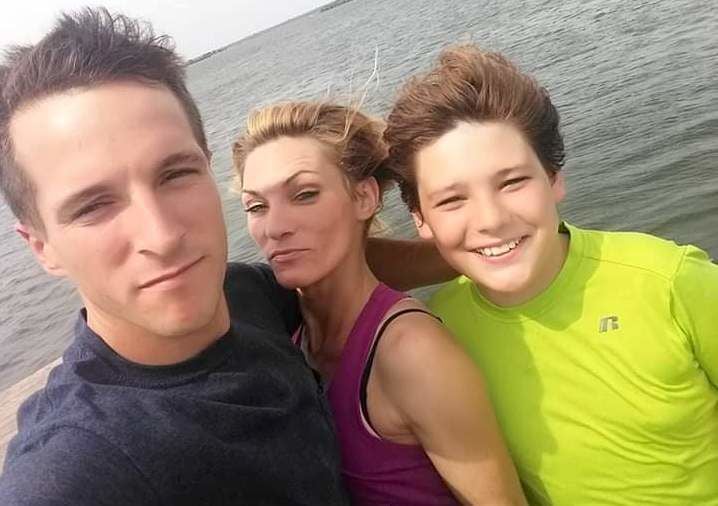 Adam Mckeown, wife Kayla Mckeown and Kayla Mckeown's son Chad Burke Jr. pose for a selfie. Chad Jr., 12, was injured in a shooting July 4, 2020, while watching fireworks on his family's front yard off of West Rolling View Place in Lecanto. Editor's Note: This caption was updated with correct names.

Chad Burke Jr. was watching his dad shoot off fireworks on his family’s front yard in their Lecanto neighborhood.

Chad Burke Sr. was priming a mortar to fire while his 12-year-old son sat with relatives closer to the house off of West Rolling View Place, near the intersection with West Southern Street.

Kayla Mckeown, Chad’s mother, told the Chronicle on July 8 she was inside the house.

Chad Sr.’s firework went off with bangs, masking the sounds of multiple gunshots, one of which struck Chad Jr..

According to the Citrus County Sheriff’s Office, in a news release issued Monday, July 13, 2020, it’s unclear which direction the gunfire came from.

Details about the ammunition type or caliber are also not yet being released by the sheriff’s office.

Rounds landed in surrounding properties, and one struck Chad Jr. in the left side of his abdomen, traveling through to his stomach, Mckeown said.

First responders couldn’t airlift the injured child for treatment because of bad weather, forcing Nature Coast EMS to transport him to Ocala Regional Medical Center for emergency surgery to restore the severed artery near his leg.

It would be the first of several hospital operations for Chad, who lost a large piece of his intestine and went under the knife numerous times to remove blood clots before recovering in stable condition at UF Health Shands Children’s Hospital in Gainesville.

“He’s doing very well,” Mckeown said. “He’s just going to be in a lot of pain for the rest of his life.”

Sheriff’s office investigators would like to question the shooter, and they’re asking the public to help identify the person responsible.

Tipsters wishing to remain anonymous and be eligible for a cash reward can contact Citrus County Crime Stoppers by calling 1-888-269-8477 or visiting crimestopperscitrus.com.

In the meantime, the sheriff’s office is asking gun owners to use care and common sense when handling and shooting firearms.

“It is important to ensure that steps for proper gun safety are utilized at all times,” the agency news release read. “This includes making sure you are firing into an appropriate backstop, never fire rounds openly into the air, always keep the gun pointed in a safe direction and never use or possess a firearm while under the influence of drugs or alcohol.”

Mckeown said her son’s accidental shooting was a careless act, and implored gun owners to keep their firearms secured instead of using them to celebrate.

If it doesn’t cause death or serious injury to someone, she said, a reckless shooting will at least traumatize them.

“He’ll never celebrate the Fourth of July again,” Mckeown said about her son. “He hates fireworks now; he cries when they come on TV.”