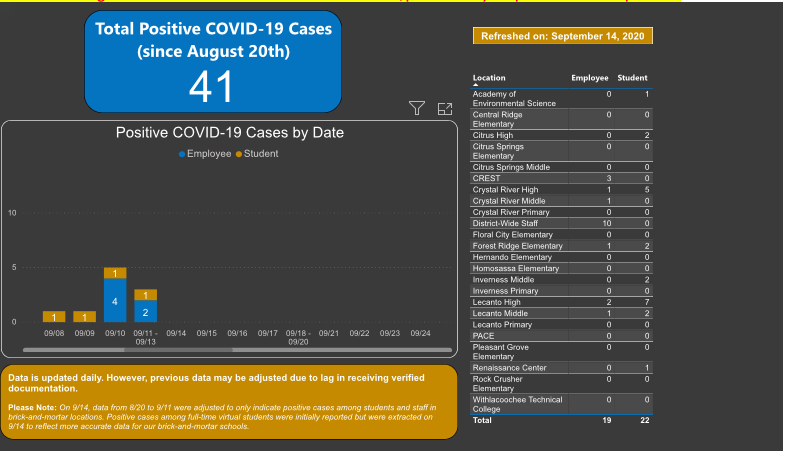 Prior data sets from between the first day of school on Thursday Aug. 20, 2020, to Monday, Sept. 14, included cases from both physical schools and the Citrus Virtual School.

To see the data on positive coronavirus cases reported to the school district, visit tinyurl.com/y6l9wj2n.

Before Monday’s change, there were 49 reported cases across the school district.

After non-brick-and-mortar students were removed from the dashboard’s counts, 41 cases remained, which also includes the addition of one student and two staff members whose positive tests were recorded over the weekend.

A trio of employees from the CREST (Citrus Resources for Exceptional Student Transition) School have tested positive, along with a Renaissance Center student.

No cases have been reported at either the Withlacoochee Technical College or the Pace Center for Girls.

Previous data may change due to a lag in receiving verified documentation on cases.

Blair said health department officials were unable to notify them over the weekend; however, when the students arrived at school Monday morning, staff immediately isolated them and contacted their parents to pick them up.