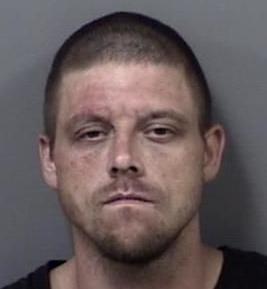 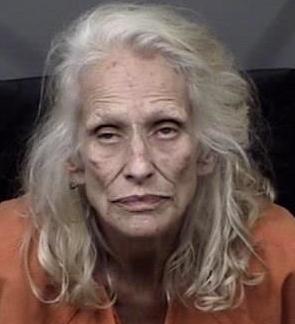 A high-speed chase Tuesday of a motorcycle led to the arrest of a Homosassa man who now faces charges that include possession of a gun by a felon, habitually driving without a license, fleeing law enforcement, and a $21,500 bond.

The events that led to the arrest of Eric Lee Sputa, 33, of 5740 South Hilltop Road, began when a Citrus County Sheriff’s Office deputy at West Cardinal Street and South Lecanto Highway saw Sputa on a blue and white Suzuki motorcycle with no license plate, according to arrest records. Sputa was  driving above the speed limit down Cardinal Street, according to the arrest report.

When the deputy followed him the deputy estimated he was driving 70 mph in a 55-mph zone. Sputa increased his speed and managed to leave the deputy behind, according  to the arrest report.

Soon later, another deputy spotted Sputa pulling into a Marathon gas station on West Cardinal Street and South Gross Avenue in Homosassa, according to the arrest report. When Sputa saw the second deputy, who then turned on his siren and lights, Sputa fled.

Later again, the first deputy saw Sputa on the same motorcycle driving east on West Educational Path in Lecanto and then driving onto a private road that dead ended. Sputa then made a U-turn and started heading again toward Lecanto Highway, according to arrest records.

The deputy drove his cruiser towards Sputa and a fence and managed to wedge Sputa in when Sputa hit the front corner of the deputy’s car. The deputy got out of his cruiser with his gun drawn and several times ordered Sputa to stop, according to the arrest report. Sputa stopped trying to leave only when he saw he was pinned in by the car and fence, according to the arrest report.

Sputa then got off his motorcycle and asked “what did I do?” according to arrest records.

Because of the location of cruiser, fence and motorcycle, the arresting deputy could not immediately reach Sputa. During this time, Sputa reached into his front pocket and threw something on the ground, according to the arrest report.

When another deputy arrived to help, the deputies tried to handcuff Sputa but he resisted. The two managed to get Sputa to the ground and eventually handcuffed him.

The arresting deputy examined the baggie that had been thrown down and the contents tested positive for methamphetamine. The motorcycle was also not registered.

The arresting deputy also learned that Sputa was a habitual traffic offender and that his license had been revoked several times, the latest being this month, according to arrest records.

One assisting deputy also found a loaded .25 caliber handgun in the rear compartment of the motorcycle and the arresting deputy found several additional bullets in Sputa’s front pocket, according to the arrest report.

Sputa was arrested. Asked why he fled from the deputies, he replied to the arresting deputy that he was tired of going to jail because of license problems.

He was charged with criminal mischief, possession of a firearm by a convicted felon, possession of a controlled substance, driving while his license was suspended or revoked, resisting arrest without violence, driving a vehicle that wasn’t registered, and fleeing law enforcement with lights and siren.

The events that led to the Thursday arrest of Bonnie Mae Ball, 63, began when a Citrus County Sheriff’s Office deputy was called to the Inverness RaceTrac gas station on State Road 44 about a complaint regarding a naked woman walking the business’ parking lot.

When the arresting deputy arrived at the business, he ordered Ball, of 3014 East Raccoon Court, Inverness to get into her car and put on some clothes on. She complied, according to arrest documents.

Meanwhile, the deputy also called emergency medical personnel to the parking lot. After emergency workers examined her, the arresting deputy ordered Ball out of her car.

When she got out of her car she was still pulling up her pants and a glass pipe fell from one of the pants’ legs, according to arrest documents. The pipe later tested positive for cocaine.

The deputy arrested Ball and searched her purse that was on the passenger seat of her car, according to arrest documents.

The arresting deputy found in the purse her identification and a live rifle shell. A criminal history search of Ball found that she was a convicted felon from Vermont, according to arrest records. A convicted felon may not possess a firearm or ammunition.

The arresting deputy charged her with possession of a firearm or ammunition and possession of drug paraphernalia. The bond was $11,000. She was taken to the Citrus County jail.