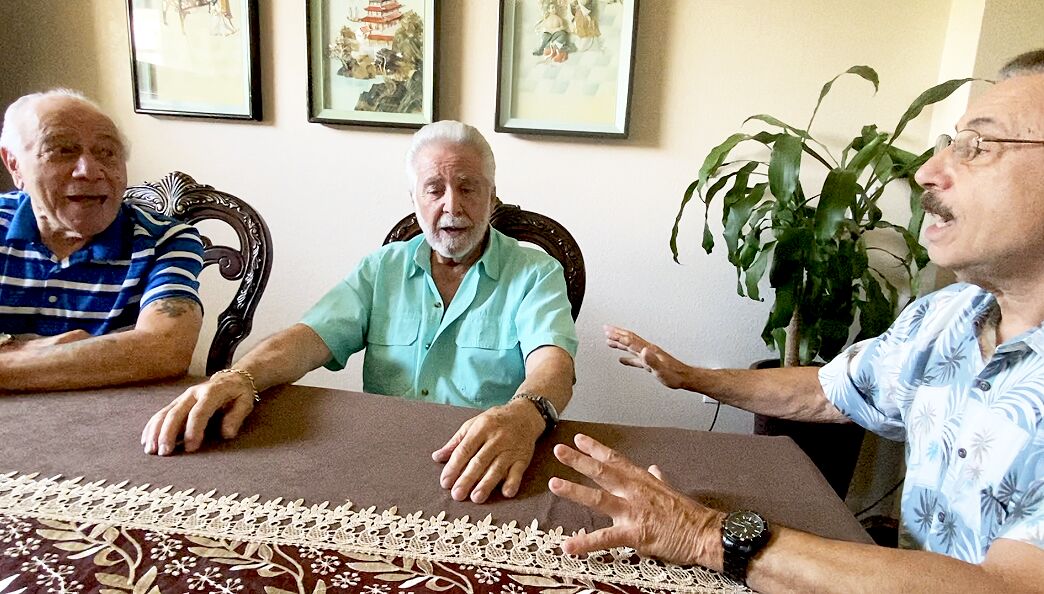 From left are: Phil Cracolici and George Galfo, who live next door to each other in Beverly Hills, (these two are original Mystics), and Rocky Marsicano, who lives in Pine Ridge. Not pictured: Fellow Mystics member Ralph Varrone, who joined the group three years ago, lived in Kissimmee. 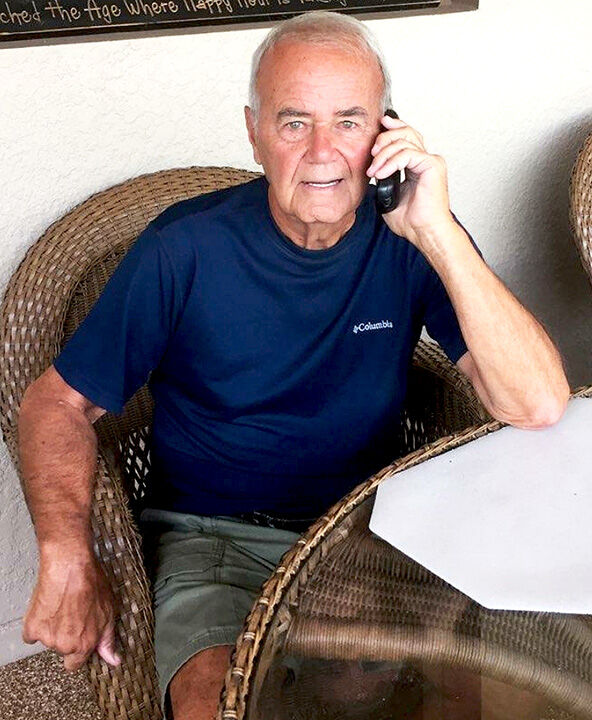 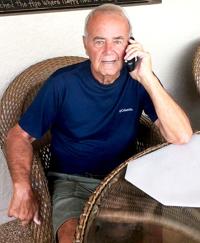 Ralph Varrone, who joined the group three years ago, lives in Kissimmee. 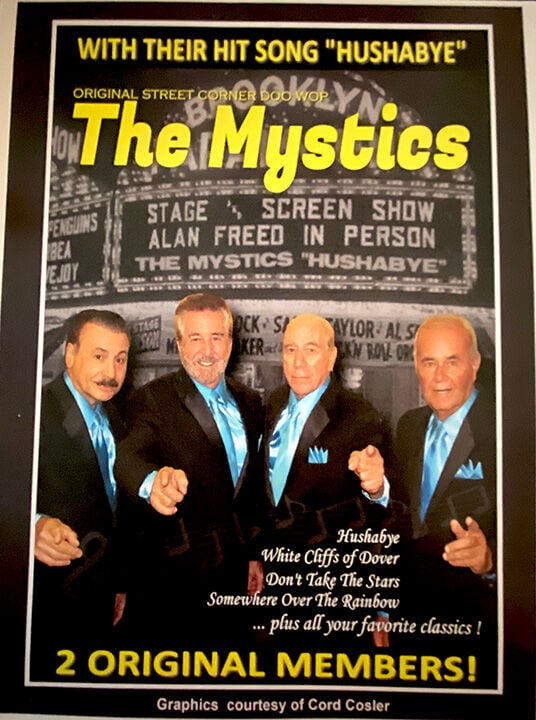 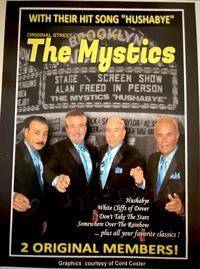 Their voices mix like vanilla, chocolate, coconut, and almond flavorings swirled into a blender. Their songs, a sweet fusion of close harmony, still bring joy 62 years after their song, “Hushabye,” soared into Billboard’s top 40 hits and stayed there nine weeks.

Today, 3 of the 4 Mystics live in Citrus County and the fourth, Ralph Varrone, lives two hours away in Kissimmee.

Marsicano formerly was with the Orions, the Riffs, Lenny Cocco and the Chimes, Jay Siegel and the Tokens, and Manhattan Skyline.

Varrone formerly was with the El Jays, The Traditions, and Risky Business.

The Mystics are emerging from the pandemic to perform both locally and across the country. They have a concert set for Nov. 14 at the First United Methodist Church in Homosassa. Among their other performances are appearances at a Fall Doo Wop Cavalcade in Lancaster, Pa., a “Stars of the ’60s” concert in Lorain, Ohio, and a Rock ’n’ Roll and Doo-Wop concert in Wheeling, W.V. And that’s not to mention the Malt Shop Memories Cruise coming up in November.

But mostly, what the Mystics agree they are doing these days is “enjoying having fun,” as Galfo put it. “Now, it’s fun. Before, it was stressful. It’s more enjoyable now,” he said.

Galfo, Cracolici, and Marsicano met at Galfo’s home recently to discuss what they’re up to, as well as where they’ve come from and where they’re going. Varrone spoke by phone a few days later.

The Mystics emerged at the height of the popularity of doo-wop singers, and their music is characterized by a lead vocalist singing the melody, with the others backing up with harmony — “Doo-wop, doo-wop.”

As Galfo explained, “Doo-wop was rock ’n’ roll. We don’t even particularly like the name, ‘doo-wop.’”

At the heart of the doo-wop sound is the intricate blend of the four singers’ voices. Although The Mystics frequently perform with a band, sometimes they sing a cappella, and the band is barely missed.

How did they learn to harmonize and sound like chords from an organ?

“It took a while to do,” Galfo said. “It was basically trial and error.”

Galfo and the others told how they’d mimic other singers to learn the sound. Musical influences included the Penguins, the Moonglows, and the Flamingos. There were rhythm and blues groups they’d try to emulate. Dion and the Belmonts were on the same Laurie Record label as the Mystics.

The Crests, Johnny Maestro, and Frankie Lane all played a role in shaping the Mystics. And the singers’ families had listened to such vocalists as Frank Sinatra and Perry Como.

Varrone explained that in the 1950s, groups didn’t have keyboards and other electronic equipment that could mimic many sounds.

“We’d just stand around in groups on street corners, “ he said. “No one played a musical instrument. We just tried to sing songs like ‘In the Still of the Night’ or ‘Earth Angel’ and copy it as best as we could.

“Once you tried your hand at it, once you started singing with a group and realized that you could make music or harmony without any music, it was a rush. It was like, ‘Wow! That’s pretty cool,’” Varrone said.

Galfo and Cracolici were members of the Overons, which preceded The Mystics. After following rock ’n’ roll groups around and trying to imitate what they did, The Overons attracted the attention of a talent agent, and Laurie Records offered them a contract.

With the big boys

The Mystics began appearing on stage with name groups.

“Here we are, on stage with The Crests, and the stage is shaking to packed houses,” Galfo said. “Waiting on the side to perform was scary,” he said.

“It still is,” the others chimed in.

“When you lose that stage fright, that’s when you should stop singing,” Marsicano said.

They recorded “Hushabye” in 1959 after Laurie executives said a song that writers Doc Pomus and Mort Shuman had written for The Mystics, “Teenager in Love,” needed to be performed, instead, by Dion and the Belmonts, who already had had three hits.

Pomus and Shuman were told to write another song for The Mystics. “Hushabye” is the result. “Teenager in Love,” as performed by Dion and the Belmonts, rose to No. 5 on the Billboard pop charts. “Hushabye” became The Mystics best-performing song.

Suddenly, the group was a household name.

Cracolici was the lead singer on “Hushabye,” and on the group’s follow-up song, “Don’t Take the Stars.” He said he was thrilled when he was riding in a car and heard “Hushabye” on the radio for the first time.

“Turn the volume up,” he said.

The Mystics performed on Dick Clark’s “American Bandstand” and Alan Freed’s “Big Beat Show,” among other venues. Freed began playing “Hushabye” as the closing tune of his Saturday evening TV show. The Mystics went on a Cavalcade of Stars tour, a tour that followed the tour that claimed the lives of Buddy Holly, the Big Bopper, and Ricky Valens.

Joining The Mystics on their tour were Johnny and the Hurricanes, Freddy Cannon, Frankie Ford, Barbara Evans, and Carl Dobkins Jr.

“It was a new feeling,” Galfo said.

The young women in the audience couldn’t get enough of their musical idols.

Once, while The Mystics were on stage, “One untied my shoes,” Galfo said, “and another cut off a lock of Phil’s hair.”

According to Galfo, “It was a strange experience. Sometimes, we couldn’t get out of the house.”

However, by 1964, the Beatles had launched the British Invasion of the pop world, and “We were thrown out of the scene,” Galfo said.

The Mystics were vocalists. Laurie Records found the group’s songwriters and decided which songs they would record. The Beatles, on the other hand, wrote and performed their own material. The musical rules of the road had changed.

Plus, with the Beatles and other British groups, “It was the hair,” Galfo said.

The Mystics had cultivated an image of clean-cut young men. Although the going was tough for a few years and the guys pursued careers in other fields, they stuck with their wholesome image. Soon enough, they were asked to appear in do-wop and rock ’n’ roll revivals.

At one point, they were approached to cut a rap to be performed doo-wop style. They thought such a recording would be unique and might help their careers.

But the group found the lyrics offensive.

Nevertheless, the group doesn’t just look to the past to appreciate music. They said such modern-day performers as Kid Rock, Boys II Men, and NSync do a good job.

“The lyrics have to be pretty good,” Marsicano said.

They said they love to hear groups, and some from the past they enjoy include the Four Freshmen, the Four Lads, and the Four Aces.

These days, when they give a show, many of the people in the audience know all the lyrics and sing the words back to the group.

The Mystics’ music “brings back memories for them,” Galfo said. “Every song is one they can relate to.”

Varrone said the audiences “are extremely grateful for the music and for keeping the music alive.”

The foursome also like to tease their audiences a bit.

For example, “During intermission, we may feel, ‘Let’s fool them,’” Galfo said. “We may show up in the lobby and sing a capella. We have fun doing that.”

They said they enjoy living in Florida. This area is “laidback and friendly,” Galfo said.

They recommend that people who are interested in breaking into the music business “Do what your heart desires,” as Galfo put it. “If you love it, stick with it.”

They recommend young singers learn to play an instrument and read and write music.

Although they don’t play instruments, the Mystics admit they have harmonized on kazoos.

They’ve learned that when they don’t agree on whether to perform certain songs or when they disagree on other matters, they can resolve most differences by talking about them.

For The Mystics, what’s important now is “just living out life and enjoying it,” Galfo said. And when they get together, “We laugh most of the time,” he said.

An hour after the group had started talking about their life in the music business, a large grandfather clock near a dining room table in Galfo’s house bonged the hour — Bong, bong, till the clock had rung 11 times.

“Would you like to hear a song?” the Mystics asked.

And so, they demonstrated how they find their key, their groove, their musical path. Marsicano came in on lead. The others danced around his note. They tried first one key, then the next, three, four times, as they strove for the perfect note, the perfect harmony. And then, they had it.

Their voices wound around each other like smoke curling up from a cozy fireplace. “Cheri, I love you so, that’s my desire.” As they sang, Marsicano pointed to himself that he was taking the solo on the word, “desire.”

They continued the tune that Dion and the Belmonts, among other groups, recorded.

Oh, heck. It was flawless.