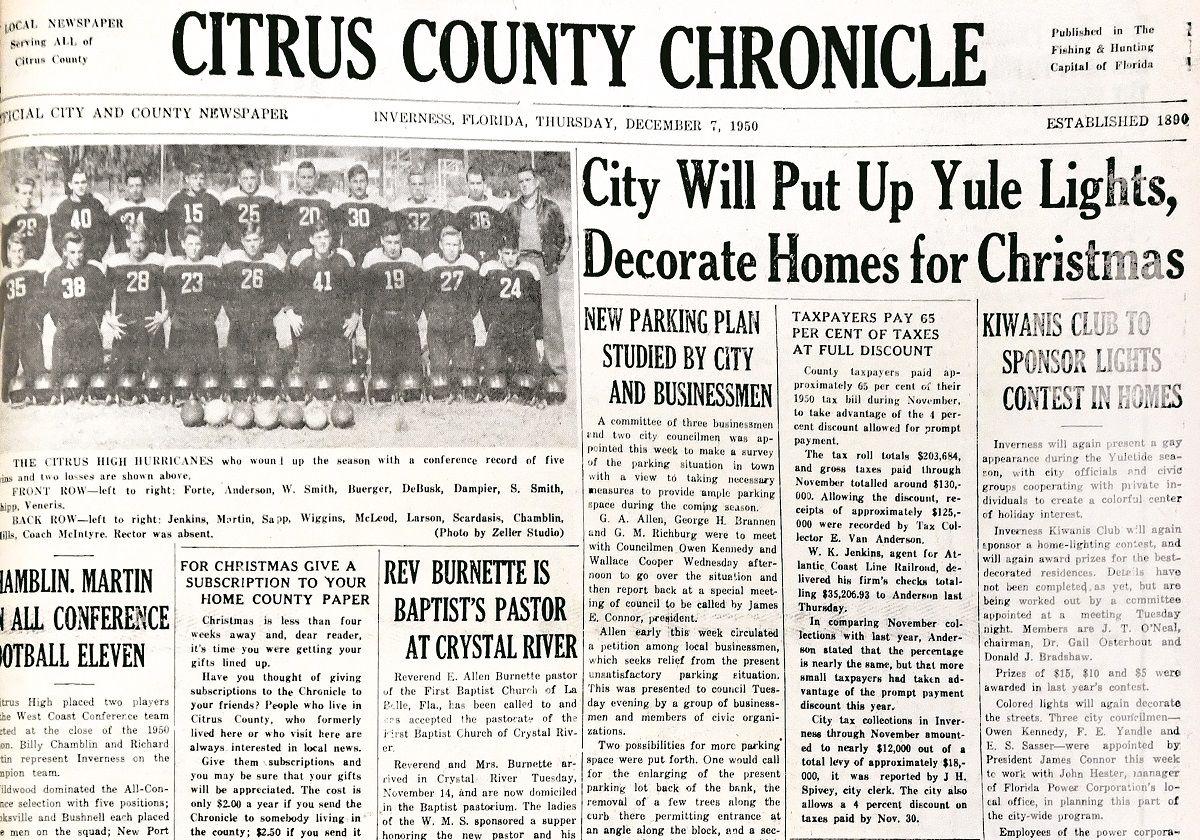 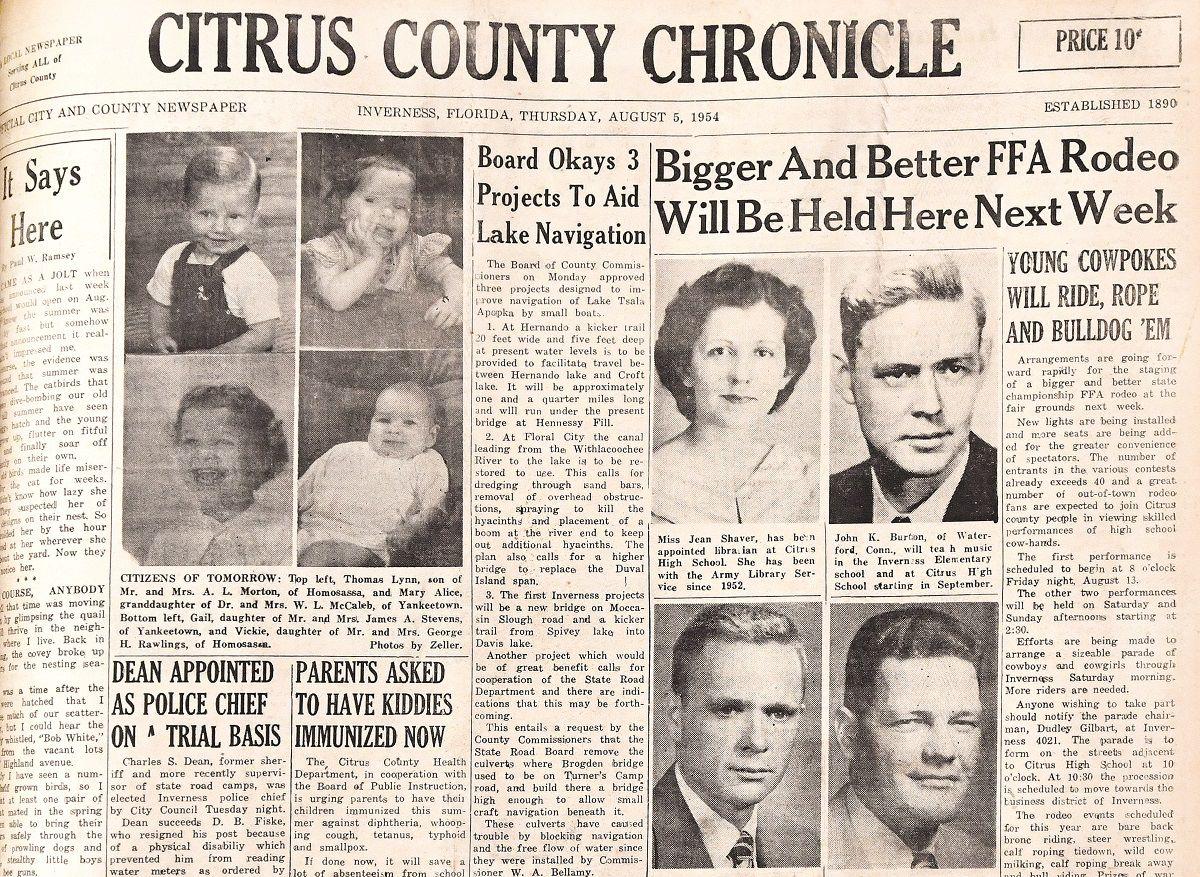 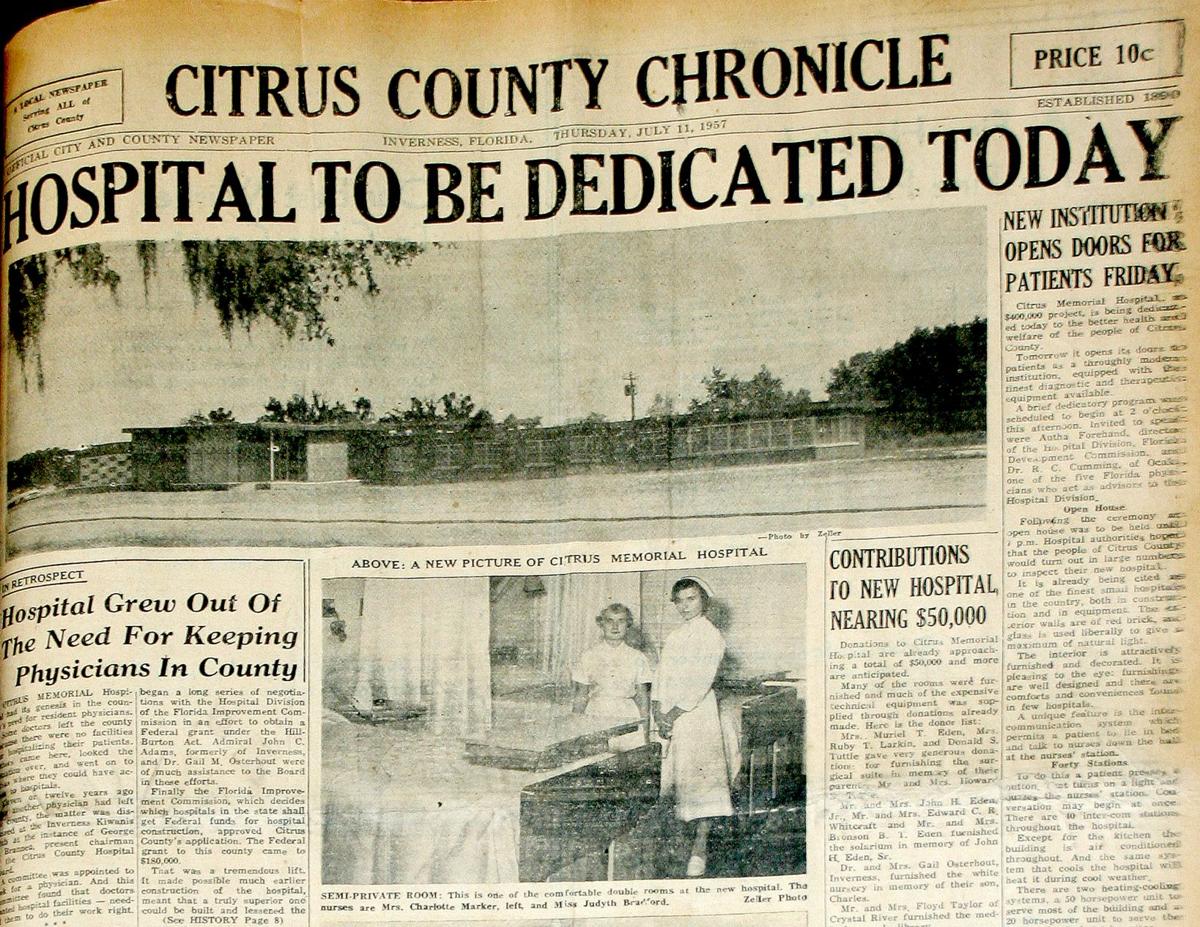 Real growth was starting to be felt in Citrus County during the Fabulous '50s.

The decade had just begun when another war broke out – the Korean Conflict.

Citrus County felt the impact right away. Richard Sanders, who attended schools in Inverness, was killed on the banks of the Naktong River.

In 1950, Chronicle editor Paul Ramsey sharply criticized the passage of a state sales tax bill, pointing out Gov. Fuller Warren had violated one of his campaign pledges when he signed the bill.

It was also the year the governor outlawed cattle and livestock on the highway with fence laws to be effective July 1, 1950.

Baseball legend and Homosassa Springs resident Dazzy Vance was named to the baseball hall of fame.

July 11, 1957 was the date the Chronicle editorialized as “a day to be remembered – the day we dedicated our new hospital.” The $400,000 Citrus Memorial Hospital was dedicated to better health and welfare of the people.

A Chronicle editorial stated, “It is a solid community achievement. Any vigorous people have their differences, and we have ours, but we venture to say that there was more unanimity among us in the undertaking and accomplishment of this project than any before.”

In the beginning of 1958, editor Ramsey ran stories on the opening of a new golf course at Paradise Country Club near Crystal River, a new shopping center in Inverness and St. Ann’s Episcopal Church.

After 11 years of publication by Mr. and Mrs. Paul Ramsey, the Chronicle was sold to Mr. and Mrs. Phil Bennett of the Bennett-Hahn Co. in June 1959.

Woodward Field was designated the official name of the Crystal River-Homosassa Air Terminal. It was named for the late Major C.D. Woodward for his efforts in making the airfield a reality.

Bob Tannehill was new editor of the Chronicle.

Significant events around the nation and world include:

•  Ray Kroc opened his first McDonald's restaurant in 1955, the same year that Disneyland opened in California.

•  In 1956, with the urging of President Dwight Eisenhower, the Interstate Highway System act was passed. A total of 41,000 miles were paved in 20 years.

•  Elvis Presley made his first appearance on the Ed Sullivan Show that same year.

• The following year NASA was created and the space race was on.

News clips and advertisements that appeared in the Citrus County Chronicle during the 1950’s.