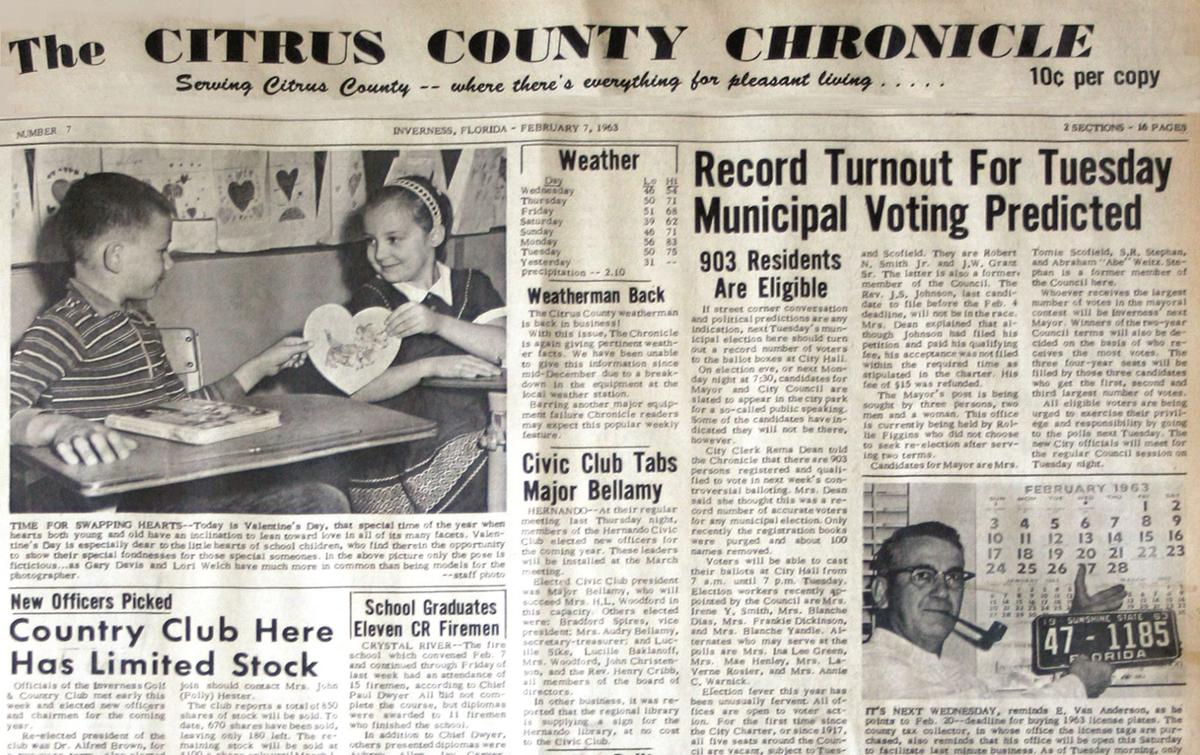 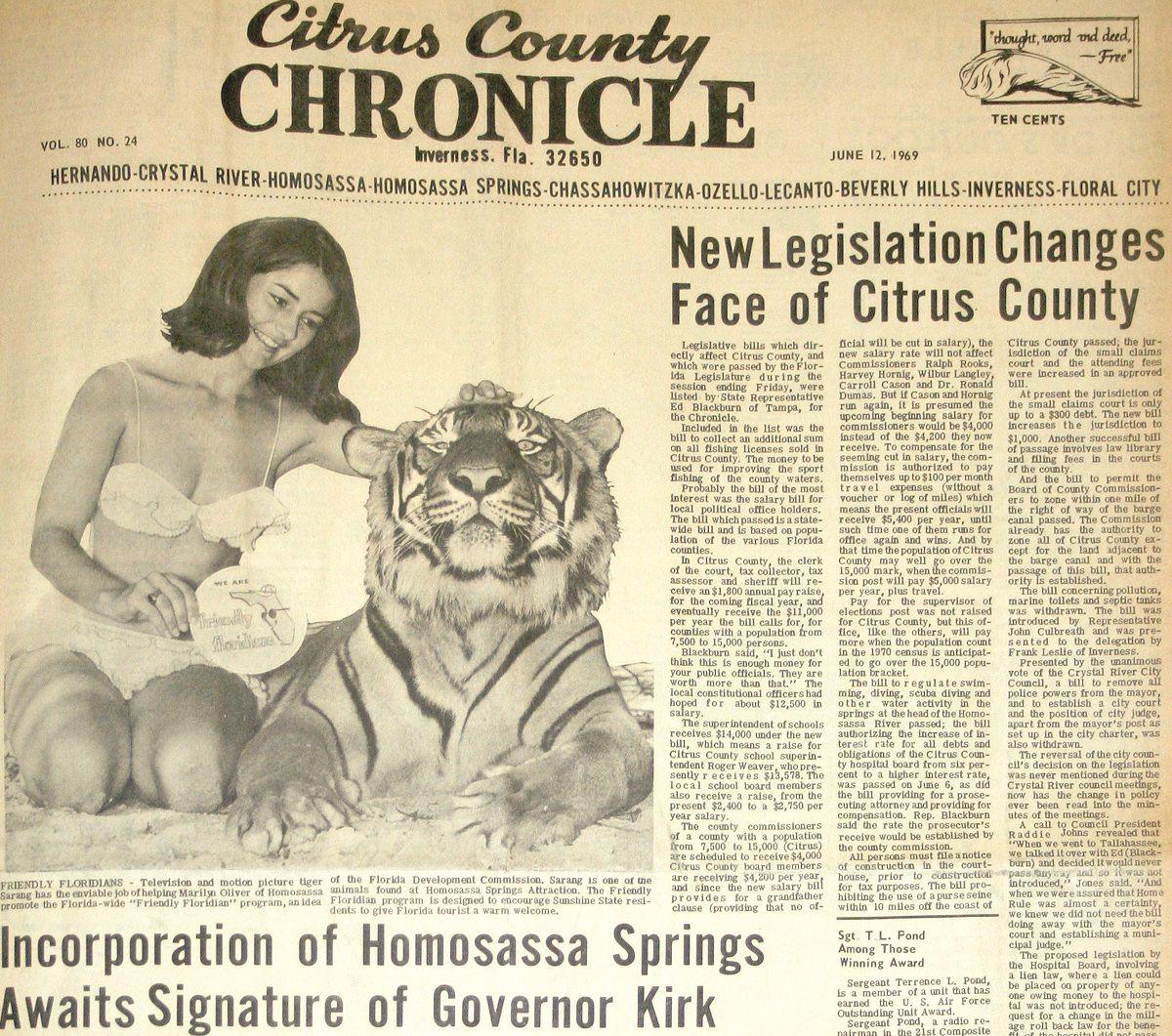 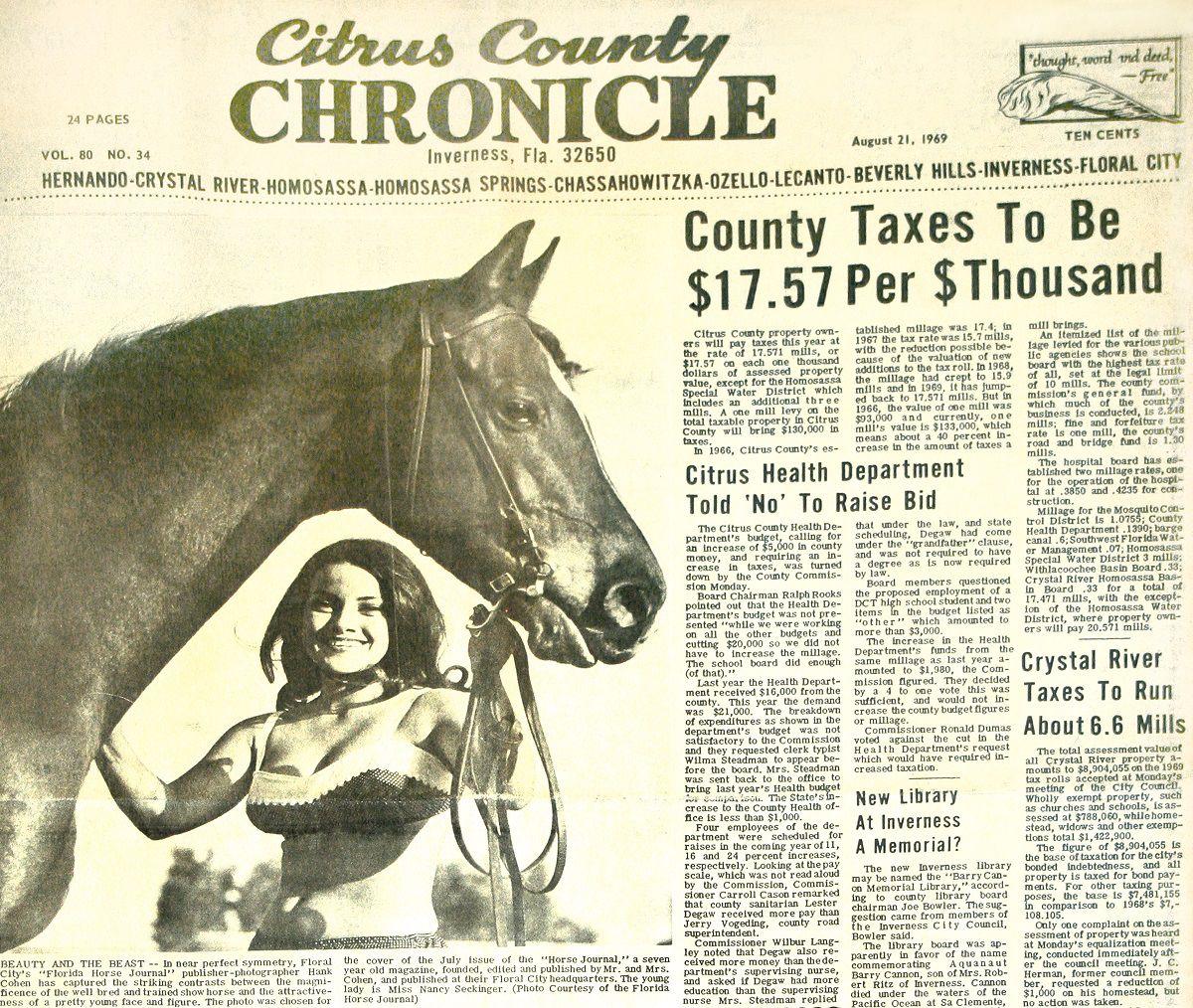 The decade of the 1960s saw the beginnings of real growth in the county as Beverly Hills was starting to be developed and Elvis Presley arrived to film a movie. In 1960, the population was recorded at 9,268.

The Presley movie “Follow That Dream” was filmed in 1961 around the Courthouse Square and courtroom in Inverness and in and around the Bird Creek Bridge on Route 40 near Inglis. “The King” stayed at the Port Paradise Resort in Crystal River.

Developer Sam Kellner promoted Beverly Hills as “The Alps of Florida” bringing in an influx of new residents.

One of the worst freezes on record devastated a banner citrus crop in 1962. That same year, art lovers banded together to form the Citrus County Art League.

Ground was broken in 1964 on the Cross Florida Barge Canal and big news for Citrus County was made at the ceremony. It was announced that Florida Power was in the planning stages for the construction of a nuclear power plant just north of Crystal River. The project was started in the 1960s.

The Bennett-Hahn Co. announced they were selling the Chronicle to Frances and Carl Turner of Waupaca, Wis. The Turners also published three newspapers in their home state.

Publisher Carl L. Turner died suddenly on June 19, 1962, at his Wisconsin home, and his wife sold the Chronicle to a group in St. Petersburg headed by Robert L. Chamberlain and former St. Petersburg mayor Herman Goldner.

Early in 1964, 33-year-old David S. Arthurs purchased the Chronicle from the St. Petersburg group. A native of Atchison, Kansas, Arthurs had come to Florida to work as publishing supervisor of the John H. Perry newspapers in Delray and Palatka.

Arthurs watched Citrus County grow and he was highly supportive of community projects and became master-of-ceremonies at major meetings and gatherings.

Around the nation, it was a decade of turmoil.

The Vietnam War became more and more unpopular as the decade drug on.

However, the decade ended on a positive note as Americans watched in awe and a sense of pride when our astronauts landed, walked on the moon and returned safely to Earth.

News clips and advertisements that appeared in the Citrus County Chronicle during the 1960’s.