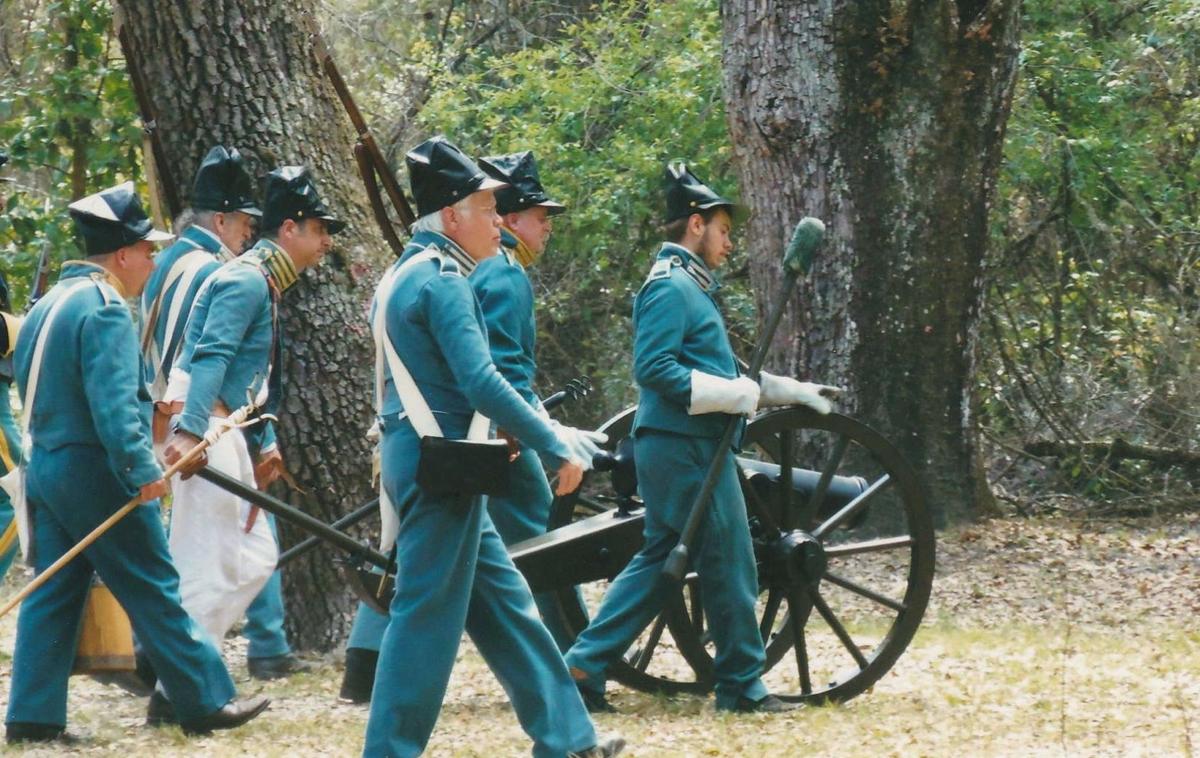 Re-enactments during Fort Cooper Days center around the Second Seminole War and particularly how Fort Cooper came to be. 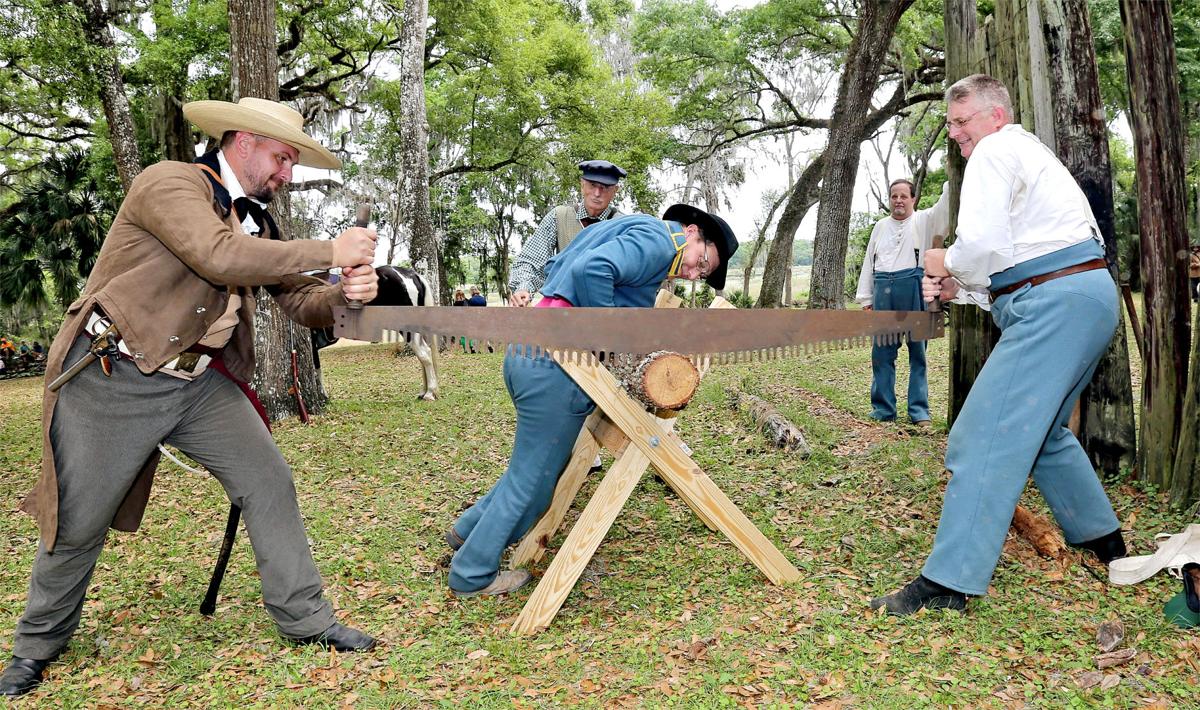 Major Cooper (Jason Klug), left, and a Field Artilary Gunner (Kevin Slaughter) saw some fire wood March 16, 2019, as a Private (Jason Miller in blue) and Militiaman (Richard Reaume) steady the log at the re-enactment of the 1836 battle Second Seminole War at Fort Cooper.

THIS EVENT HAS BEEN CANCELED DUE TO PUBLIC HEALTH CONCERNS OF COVID-19.

Re-enactors will depict the First Georgia Battalion of Volunteers, Seminoles, settlers, trappers, cowpokes and tradespeople at the 41st annual event.

Those attending the re-enacted battle will find, ‘Oh, my gosh!’ It’s so real,’” says Diane Clayton, president of the Friends of Fort Cooper, the group that organizes the event, along with Fort Cooper State Park staff.

Some re-enactors representing the Georgia militia actually come from Georgia, according to Clayton. Others come from all over Florida. Some of the Seminoles are part Seminole.

Re-enactors from several hundred miles away — and closer — camp out at the park over the weekend and show what it was like to live 184 years ago, Clayton says.

The militia will set up period tents. The Seminoles will set up a village. Clayton expects about 100 re-enactors and other participants to demonstrate what it was like to fire a musket, weave a rag rug or camp in a swamp.

She says the battle, which is at 11 a.m. and 2 p.m. both days, is the most popular activity at Fort Cooper Days.

“That’s why people come, to see the re-enactment of a battle ... And the people who come actually get to talk with the militia and Seminoles,” Clayton says.

Before or after the battles, visitors can see demonstrations of quilt-making, and of thread-making, using either a spindle or a spinning wheel. The Seminoles may cook traditional Native American food in their village. A swamp trapper will show his period camp gear and guns. A “cracker” cattleman will show his knives, guns, and barbed wire. A settler will display period goods at a trading post. A vendor will display period American Indian jewelry, Clayton says.

One woman used to bring a live angora rabbit and spin its fur into yarn. The woman, but not the rabbit, is returning this year, Clayton says, adding that no harm was done to the rabbits in the past.

Boy Scout Troop 302 of Inverness will camp in the park and sell hamburgers, hot dogs and sausages. Scoutmaster Steve Epple says the Scouts have been involved in the event more than 20 years. The event offers the Scouts not only the chance to perform community service, but also to learn about history and to work in a state park, Epple says.

About 12-15 boys will be participating, including some Cub Scouts who will have a “crossover ceremony” into Boy Scouts over the weekend, according to Epple. The Scouts also clean up after Fort Cooper Days.

The Friends has about 25 members who will meet visitors at the gate, provide tram transportation from the main part of the park to the fort site, and feed the re-enactors, Clayton says.

Clayton says the Friends are not feeding the re-enactors period food, but pancakes, sausages and scrambled eggs for breakfast and something like chicken and rice casserole or an Italian dish at night.

The Friends of Fort Cooper group first was organized in 1989, according to the group’s website, www.thefriendsoffortcooper.com/park-history. The group will have a booth of its own, providing information about The Friends and the fort.

The Friends also are organizing arts and crafts activities for children, including the chance to make a stuffed snake from a necktie and a bird feeder from a pinecone, Clayton says.

Although there is no remaining fort at Fort Cooper State Park, there remains a lot of history. The history link under the state park’s website tells how in 1836, Maj. Mark Anthony Cooper rushed to build a fort — Fort Cooper — on Lake Holathlikaha to house sick and wounded soldiers.

The soldiers were under the command of Gen. Winfield Scott, who was determined to rout the Seminoles from their reservation in the Cove of the Withlacoochee, also known as Lake Tsala Apopka. Scott was enroute to Fort Brooke, in what is now downtown Tampa, when he dropped off his wounded and sick men at Fort Cooper.

The Seminoles attacked Fort Cooper and held it under siege for 16 days before relief U.S. troops showed up. By the end of the Second Seminole War in 1842, many Seminoles had been evicted to Indian Territory west of the Mississippi River.

When the third Seminole War ended in 1858, about 200 Seminoles slipped into the Everglades. Their descendants remain in Florida today. See www.floridastateparks.org/learn/history-fort-cooper. Also, see https://en.wikipedia.org/wiki/Seminole.

Fort Cooper was used by Confederate soldiers during the Civil War and captured by Union troops in 1864. Turpentine was produced on the property in the late 1800s.

By 1970, landowner John H. Eden Jr. sold the site to the state of Florida. He helped with the archaeological excavation and the site was added to the National Register of Historic Places in 1972.

In 1977, the state park opened. Eden; his wife, Betty; and their family and friends served as “unofficial ‘volunteers’ in the early days of creating the park,” according to the Friends of Fort

Clayton says she believes visitors to Fort Cooper Days will find themselves “in a much simpler time, a time we really can’t imagine, when people lived and led much slower lives.”

The early militia, Seminoles and settlers might not have found their lives all that amusing, but Clayton assures visitors to Fort Cooper Days that they will have “a fun time.”

WHAT: The 41st annual Fort Cooper Days, including a skirmish between re-enactors representing the First Georgia Battalion of Volunteers and the Seminole Indians. About 100 re-enactors and others, including the militia and Seminoles; traders, settlers, trappers and cattlemen are expected to discuss the era of the Second Seminole War, from 1835-1842, demonstrate skills needed to survive and sell period goods.

COST: Admission is $7 for those 13 and older and free for those 12 and younger.