Citrus Countians can look forward to a nasty day weather-wise on Thursday.

The National Weather Service (NWS) is forecasting a 90 percent chance of rain and accumulations in Citrus could reach three-quarters to 1 inch. Residents could wake up to stormy conditions.

Highs will be near 72 degrees Thursday, with rain tapering off toward evening.

Rain or shine, the ribbon-cutting of the new Withlacoochee-Dunnellon Trail Connector will take place at 10:30 a.m. at the new trail underpass on the west side of U.S. 41 and County Road 39, said Kris Carson, spokeswoman for the Florida Department of Transportation.

The public is invited, she said.

On Wednesday, a line of strong storms made its way east through the Panhandle and Big Bend area, causing possible flash flooding.

“The severe threat will be isolated in Central Florida as this line moves there (Wednesday) evening through Thursday,” according to Bryan Williams, meteorologist with the Florida Forest Service.

All this rain has lowered Citrus County’s brush fire chances. The county placed in the low range on the Keetch-Byram Drought Index.

Friends of the Crystal River Preserve State Park members Dorsey DeMaster and Pam Shemet return to the Mullet Hole Kayak Launch Wednesday, March 23, as the launch is officially opened to the public. The launch is located off of North Sailboat Avenue in Crystal River.

The 28,000 acres of the Crystal River Preserve and Archaeological Park became this week a little more accessible. 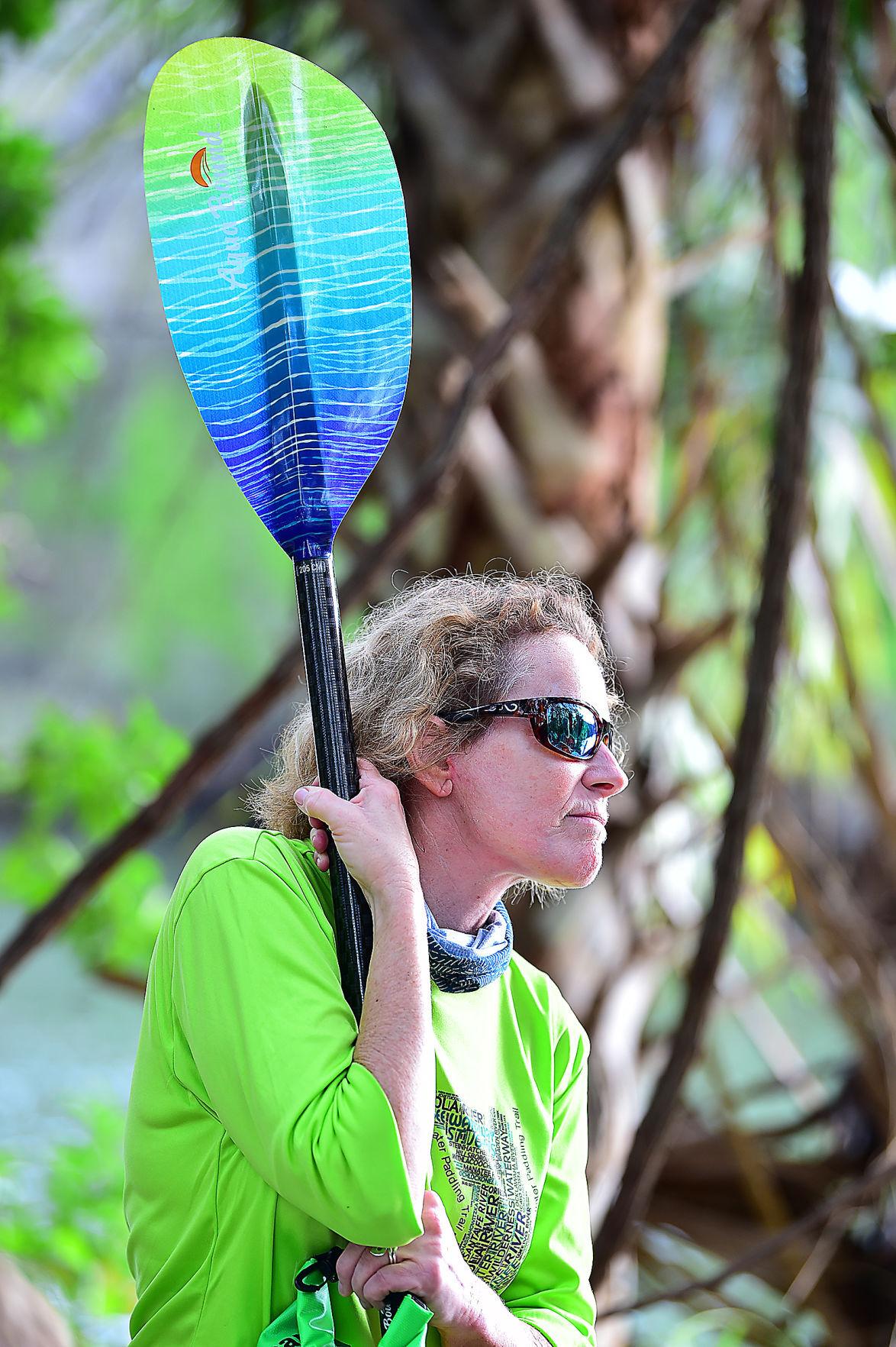 Pam Shemet, a kayak enthusiast and member of the Friends of the Crystal River Preserve State Parks, waits for a ceremonial ribbon cutting to take place Wednesday, March 23, at the Mullet Hole Kayak Launch in Crystal River.

Private donors gave more than $5,000 to overhaul the kayak and canoe ramp at the Mullet Hole. That launch site allows boaters to enter the Mullet Hole, which feeds into Indian River Canal, and from there into Crystal River and the Gulf of Mexico.

The new launch site made of concrete, gravel and rubber matting is one of two in the vast state park. It took the place of a precarious ramp made up of gravel and a steep drop that often left many kayakers and canoers tipping into the chilly waters.

“It was extremely challenging and a poor design,” said Pam Shemet, 62, of Homosassa and a member of Friends of the Crystal River State Park.

Officials of the park, volunteers, and members of environmental and kayaking groups held a ribbon-cutting ceremony Wednesday at the launch site. 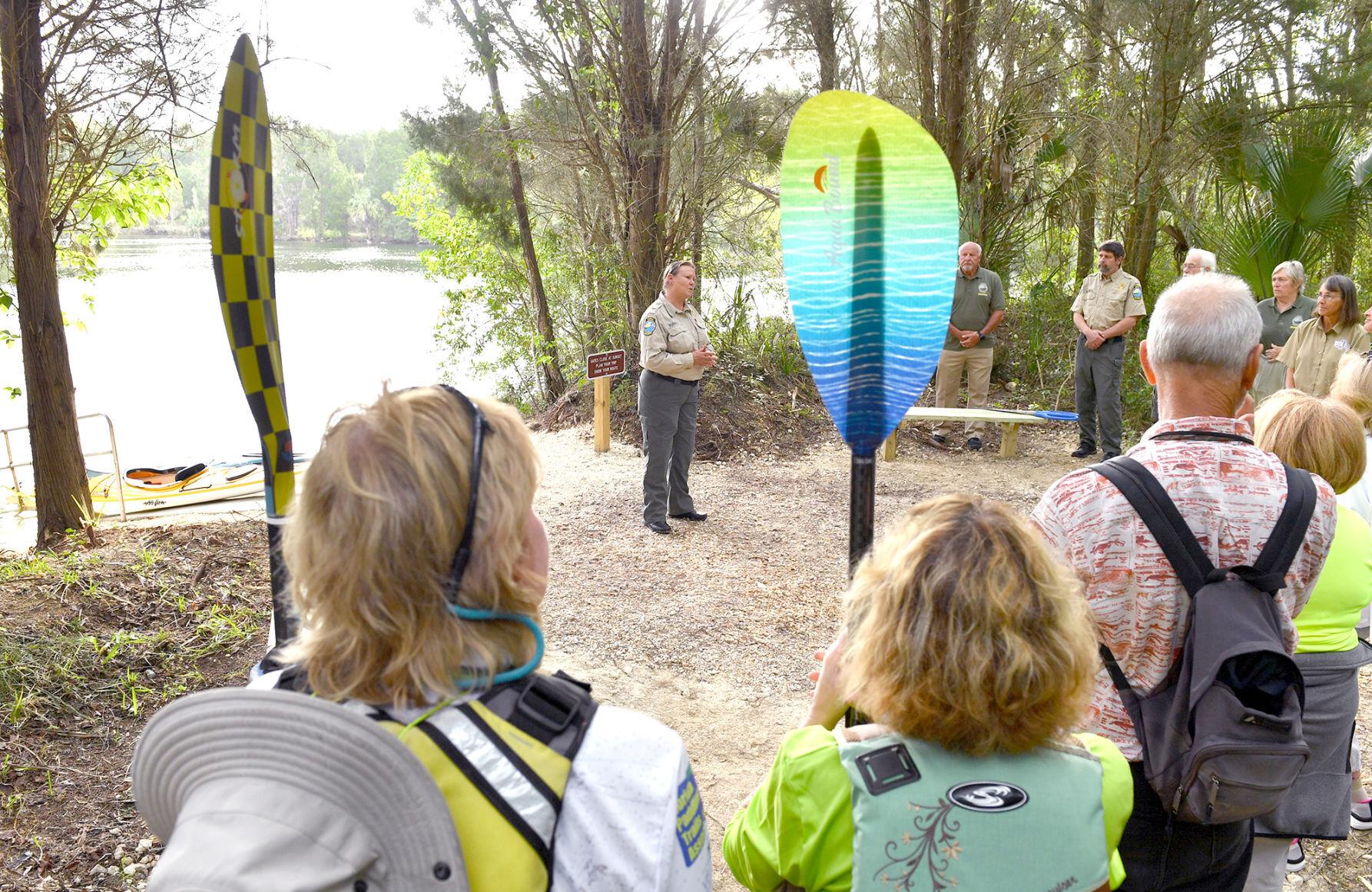 Shemet said she wanted the launch ramp to be easy to use, especially for beginners. That’s because a bad first experience kayaking for a beginner could easily turn them off to boating.

“You want it to be a positive experience,” said Dorsey DeMaster, a kayaker and president of the Florida Paddling Trails Association.

“Being outside like this is healthy for one’s soul,” she said.

And more people ventured outside and took up outdoor activities, such as kayaking and canoeing, when the COVID-19 pandemic was at its worst.

The better ramp “is just another way to encourage people to go outside,” De Master said.

DeMaster said if she and others want people to protect and feel a kinship with the environment then they need to get out into nature. 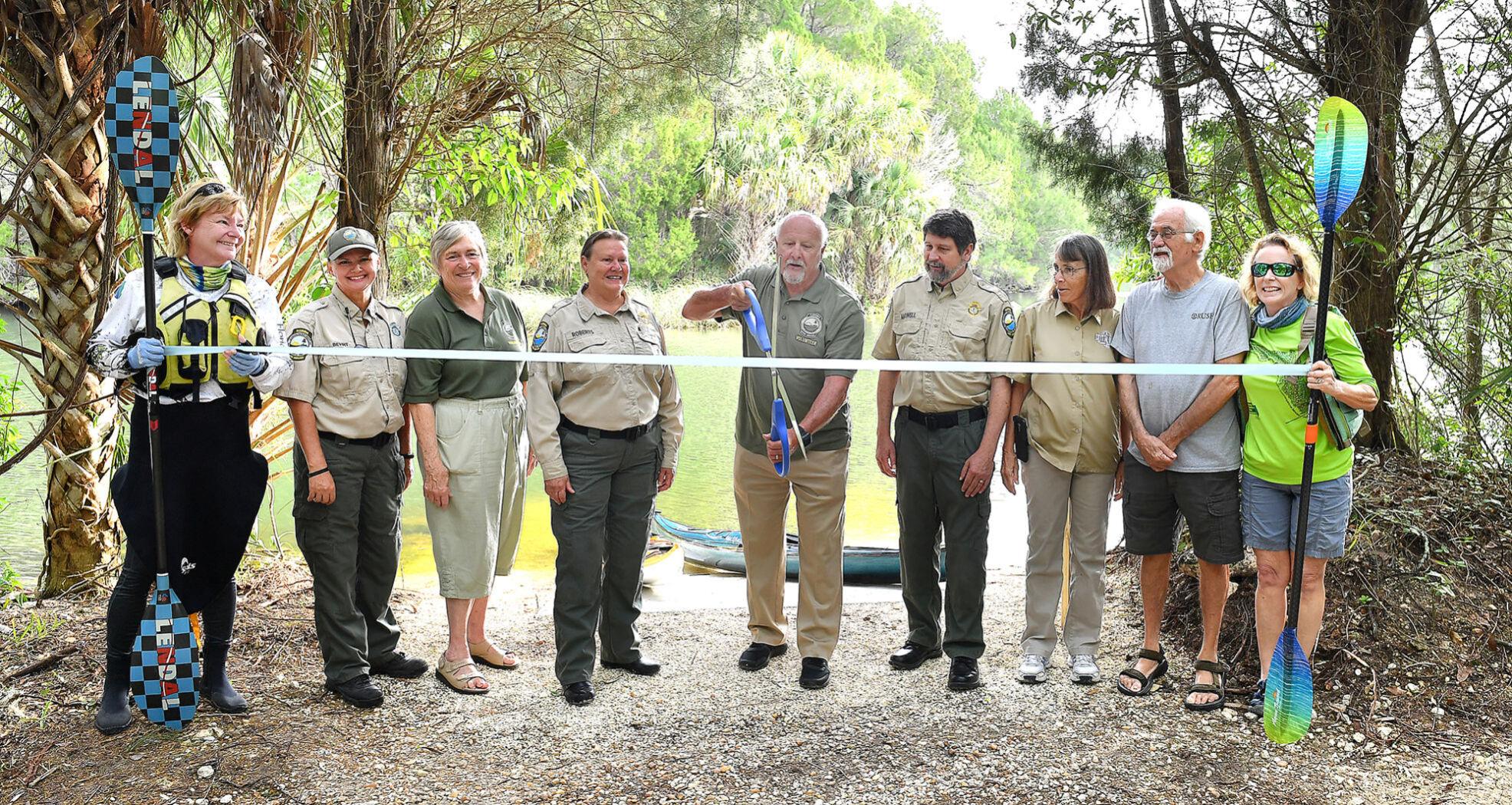 A ceremonial ribbon cutting takes place Wednesday, March 23, at the Mullet Hole Kayak Launch in Crystal River. The improved launch is open and located off of North Sailboat Avenue. Members of the Crystal River Preserve State Park and Friends of the park are present for the ribbon cutting.

Barbara Roberts, the park’s manager, said that building the new ramp was park of the park’s attempt to get more people enjoying the outdoors.

“It’s to mostly get away from the hustle, bustle of life,” Roberts said of the water and park.

During the ceremony, Ron Roecker, president of Friends of Crystal River Preserve State Park, said the overhauled launch site was “a team effort” and made possible because of every party’s contribution.

Roberts told the Chronicle that the project began in 2019 but was hampered by the pandemic and then high water delayed building the concrete slab.

Roberts said she’s already seen an increase in people using the ramp from about 10 every week to more than 20, and she predicts that number to only rise.

But Roecker said that with the donations and the park’s commitment, the launch site became a focus and made a priority, which the public deserved.

Families of the Community Action Poverty Simulation were given packets containing their unique profiles, circumstances, possessions, IDs and funds.

“Is there any way we can get the late fee waived,” Fuentes said before explaining how her husband recently deserted her.

“I’m very sorry to hear that,” Balk said in his polite denial of her request.

Fuentes flipped through a stack of paperwork in her hands to see what cash she had. What she found didn’t come close to what was due.

Unfortunately, she just had to pay $100 to get me out of juvenile detention for bringing a weapon to school.

Balk suggested we use our EBT, or electronic benefits transfer, card, but its remaining fund balance from the Temporary Assistance for Needy Families, along with our cash, still wasn’t enough.

“I need to get a job,” Fuentes told Balk before she and I traveled to the employment office across the conference room, once again using up two valuable bus passes.

Once there, Fuentes filled out a job application, and the employer told her they might contact her to schedule an interview. Even if she was hired, Fuentes wouldn’t get her first paycheck in time. She needed the money now to keep our family in its three-room apartment.

Franco tried to get a job himself, but he got caught up in dealing drugs, stealing our neighbors’ possessions, and panhandling. He put his proceeds toward our family’s expenses.

In the end, none of our efforts kept the landlord from evicting us by propping chairs up against the table representing our home, leaving us to stay in a homeless shelter in the corner of the room.

This was one of the scenarios experienced the morning of Tuesday, March 22, during the Community Action Poverty Simulation, hosted by the education foundation and school district.

“This is going to allow us to really capture how those families navigate everyday,” CCEF Executive Director Shaunda Burdette said, “and really bring us kind of down to earth with what some of those challenges are that we find with families everyday in Citrus County.”

A family is considered to be in poverty by the U.S. Census Bureau when its total income is less than the measures of its need, which are dependent on a family’s size, the age of its members, and the Consumer Price Index.

Florida data citing the U.S. Census Bureau shows 15 percent of Citrus County citizens were under the poverty line in 2020, with 24.7 percent being younger than 18 years old. Burdette said Tuesday around 70 percent of school district students “are economically disadvantaged in some way.”

“Some every day,” she said, “some periodically.”

It’s the poverty simulation’s goal to have Citrus County’s leaders, especially those associated with Prosperity Citrus, encounter and deal with the regular hardships of impoverished families, giving participants a better understanding of what obstacles and opportunities are in place.

Tied to the statewide initiative from the Florida Chamber of Commerce, Prosperity Citrus launched last year to identify and support local families struggling with indigence.

With better knowledge of how the system’s successes and faults work, Burdette said, the county can “help close that gap, and really work towards what we can do as agencies, as a community, to make sure we know how to help our families and get them on the right path.”

“The objective of this experience is to sensitize us to the day-to-day realities of life faced by people with low incomes,” added simulation facilitator Megan Furniss, “and to motivate us to be involved in activities, which help to reduce poverty in the country.”

For more information about the poverty simulator, visit povertysimulation.net.

Roughly a dozen people – county officials, CCEF board members, and staff from the county’s chamber of commerce – participating in the simulation were assigned to act as four families living in a neighborhood of tables situated in the center of the college’s conference room.

Each household had their own set of familial and financial circumstances that placed them within the average threshold of poverty.

“Your family unit is struggling,” said Furniss, who’s also the school district’s program specialist for English Language Arts and English to Speakers of Other Languages, “but it doesn’t represent the lowest spectrum of poverty.”

Simulation participants did their best to assume the roles of their temporary identities.

“This is a simulation,” Furniss said. “This is stuff that some of our families go through on a daily basis. ... There are parts of this you’re probably not going to enjoy.”

Four, 15-minute weeks represented a month in the simulation. Each family had the same objectives: keep the house secured, buy food each week, keep the utilities on, make loan payments, pay for clothing, survive unexpected costs, and keep children in school.

Around the room were school district employees posing as community services, financial institutions and businesses.

While those in the simulator knew where these agencies were located, families in real life have trouble knowing where some, if not most of these social services are.

Without a private vehicle, families in the simulator had to rely on purchased transportation passes to travel from table to table. If any family member didn’t have a pass when they arrived at their destination, they were denied assistance.

At first, those in the simulation thought their impromptu plans and hand-written budgets were solid, but they were soon dealt surprise blows to their wallets and relatives.

Furniss and her colleagues handed families “luck-of-the-draw cards” to suddenly add either good or bad favor for families to compensate for.

Community actors weren’t always helpful, either. Some were too bureaucratic, while others were too corrupt, like the payday loan store charging outrageous interest rates.

These sudden unpleasantries forced families to react on the fly, pushing them to points of panic, frustration, forgetfulness, helplessness and desperation as they did their best to not get sidetracked by another dilemma that made getting or keeping a job almost impossible.

Those stressors don’t let up in real life and keep snowballing, putting a toll on the mental health of families that are then pushed to the brink.

“You start to change your entire mindset of who you are as a person,” Burdette said, stressing the need for a collaborative effort to fight poverty, “and you start to negotiate on things that you’d never dream you’d negotiate on.”