“You certainly have times when the labor force expands because more people flood the labor market looking for jobs that aren’t there,” French said. “But anytime we see this kind of consistent new job creation, on top of fewer unemployed, we’re moving in the right direction.”

Compared to March 2021, when the unemployment rate was 6.4 percent, there are now 1,391 more workers and 1,294 fewer unemployed in Citrus County.

The last time the three-county region’s March unemployment rate was this low was in 2006.

Many forced to work from home are finding they saved money from such items as gas, child care and car payments.

“A lot of them found out they don’t need two incomes,” he said.

Dr. Ashley Shidner works with students in her Lecanto High School classroom as the teens begin the process of dissecting small pigs. Dr. Shidner was recently honored by the Forensic Sciences Foundation and presented the Warren-Young Scholarship “for dedication and enthusiasm in supporting forensic science education,” as the trophy she was awarded reads. This award is designed to encourage forensic science education at the middle and high school levels and is intended to provide funds to purchase supplies, equipment, or reference materials to support forensic science education in teaching basic scientific principles, according to the organization.

Dr. Ashley Shidner’s high school forensic science class is not for the faint of heart, but that’s why her students love it so much.

The Lecanto High School teacher is known for giving her students an understanding of real-world application to topics covered in class, and now her work is being recognized. Earlier this year, Dr. Shidner was awarded the 2022 Warren-Young Scholarship from the American Academy of Forensic Sciences (AAFS) for her efforts in the classroom.

The AAFS select one middle or high school level teacher a year to highlight the work they’re doing and provide support for their classroom. It comes with a $3,000 scholarship which allowed her to not only get the supplies for the pig autopsies the students are doing this week, but also supplies for the entomology unit next week, as well as the half male, half female skeleton in the classroom and more. 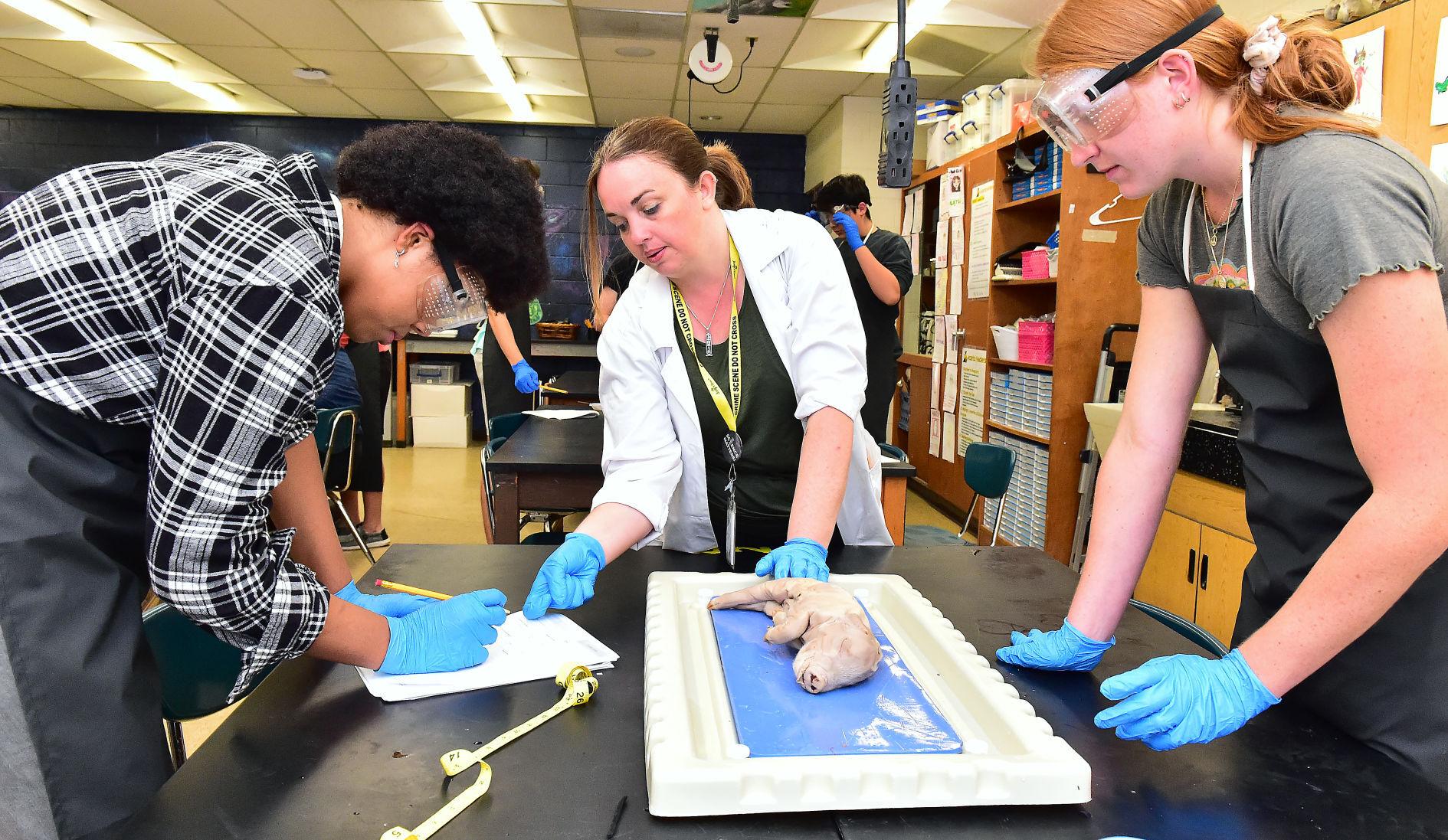 Dr. Ashley Shidner helps students Jaszimine Lathem, 17, left, and Julia Parker, 16, as they record data from their pig that will soon be dissected.

The award is highly competitive and includes complementary registration for the annual AAFS meeting in Seattle which they flew her out for during the last week of February to present the award to her.

Before her current forensic science class started, she was teaching biology at LHS and one day heard a group of students from the arts school talking about possible jobs for arts students. So, she decided to bring in her friend who works at the Faces Lab at LSU to introduce the students to a career where art and sculpting is used to make facial reconstructions for real criminal cases. They were super interested and the push for a forensics class was created, entirely student driven. Dr. Shidner was teaching the class the following year.

Reagan Howard, LHS senior who previously took the class, said, “Dr. Shidner’s class made me know what I want to do in life, so now I’m going into forensics.”

There is no shortage of love for Dr. Shidner and her classes from her students.

“I love her class. It’s one of the most interactive classes I’ve taken. We do a bunch of labs and if we’re not doing labs, we’re watching videos about the topics,” said Daniel Wheeler, LHS senior currently taking her class.

Ashley Villani, LHS senior and Wheeler’s lab partner, added, “Compared to my other science classes, this is the most hands-on where I’ve learned about real-world cases.”

The class mostly consists of juniors and seniors with the occasional freshman or sophomore sprinkled in. It is so popular, in fact, there is usually a waiting list of around 30 students each year.

At the latest county school board meeting on April 12, Dr. Shidner was recognized for receiving the scholarship and presented with a plaque for her achievement by the school board members. 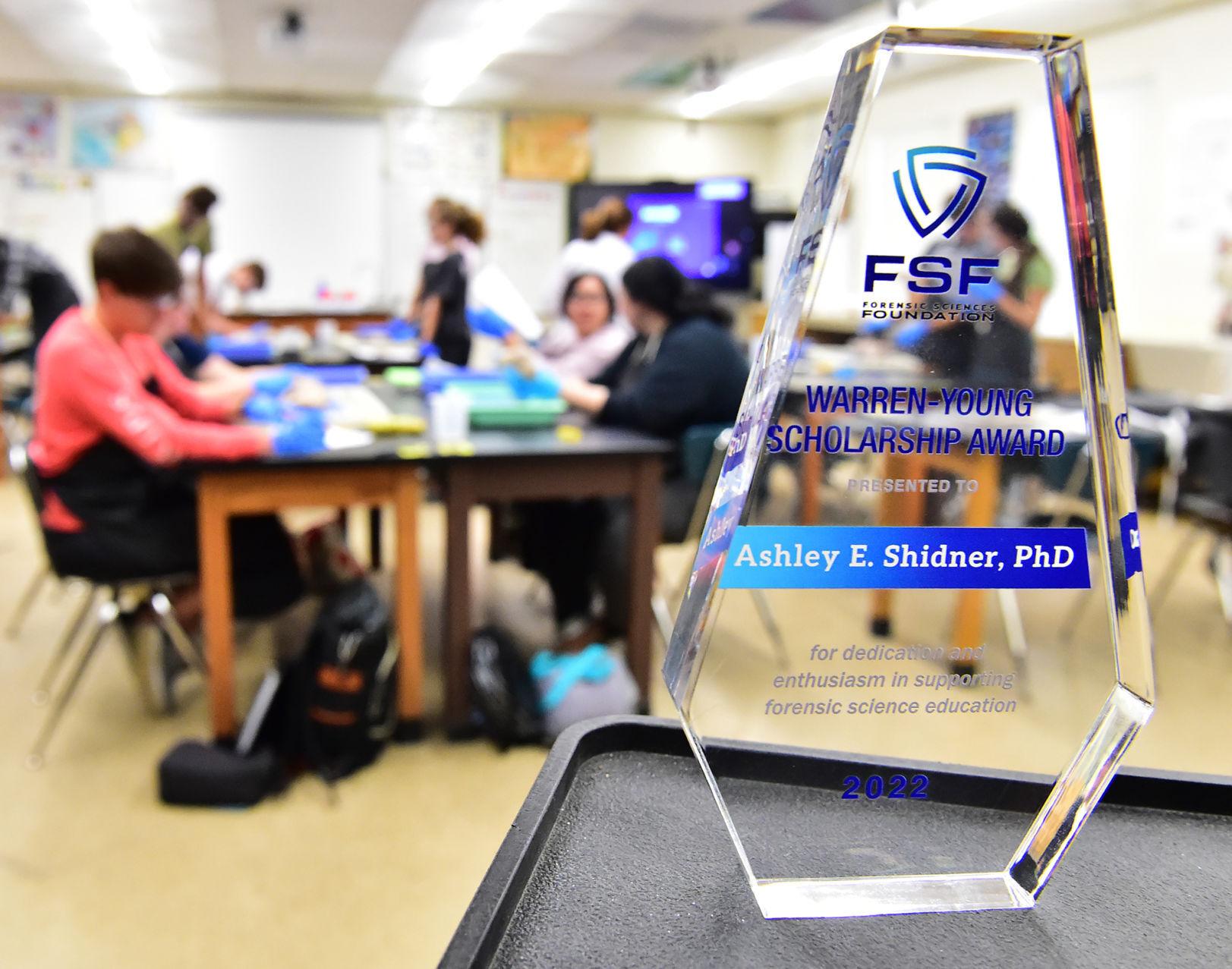 The award Dr. Ashley Shidner was presented is displayed in her Lecanto High School classroom.

During her master’s program, she worked on various forensic cases in the Panhandle and Alabama, including helping with a line search on a 14 acre property and being called in to assess skeletal remains. Her specialty is juveniles or sub-adults, so she would often assist on cases concerning children.

She also interned for the chief medical examiner in New York in 2010 where she was able to work on the excavation of one of the Twin Towers.

Though Dr. Shidner’s personal background is in forensic anthropology, the classes at LHS are more generic, covering a wide range of forensic and crime scene investigation topics. This year, the students have ran real DNA analysis, fingerprint analysis, analyzed blood spatter patterns in a lab where they threw (fake) blood at each other, and next week they will be creating their own insect collections for the entomology unit.

“Most people know about flies at a crime scene, but any insect can tell us something, even a butterfly,” Dr. Shidner explained.

She also likes to bring in guest speakers so that the students can meet people actually doing forensic work. One of the lecturers last year was someone involved in the 26-acre body farm in Texas, which is where they test different types and rates of trauma and decomposition on donated human remains in order to help in identification and analysis in future cases. It was this person who told Dr. Shidner to apply for the scholarship.

“So I did. I didn’t think I was going to get it, so I was really surprised when I got an email saying they’ve selected me,” said Dr. Shidner with a bright smile, “I was really excited. It’s been fantastic.”

Editor’s note: Every community depends on the resources and support that nonprofit agencies provide people, whether physical, material or emotional.

The Chronicle’s ongoing series, Nonprofit Spotlight, profiles the nonprofit agencies in Citrus County that exist to help make life better for us all.

The Friends of the Community Center Inc. is a nonprofit organization dedicated to raising funds for the Meals on Wheels Home Delivery Program. They provide nutrition to the most vulnerable population in Citrus County: seniors.

There is always a necessary need to feed the seniors in the community, especially during these trying times. The COVID-19 pandemic almost completely wiped out their operation funds for the Circle of Friends Gift Shop, which is the main source of the organization’s funding along with private donations.

The organization operates mainly by seven or eight volunteers at a time, with others helping when needed. There is also a board that makes decisions concerning how the gift shop, which opened in 2010, is operated.

Friends of the Community Center Inc. welcomes any and all volunteers who want to help them out either one day a week or a few times a month.

The gift shop is located at the Citrus County Resource Center, 2804 W. Marc Knighton Court, Lecanto. It operates Monday through Friday from 10 a.m. to 2 p.m.