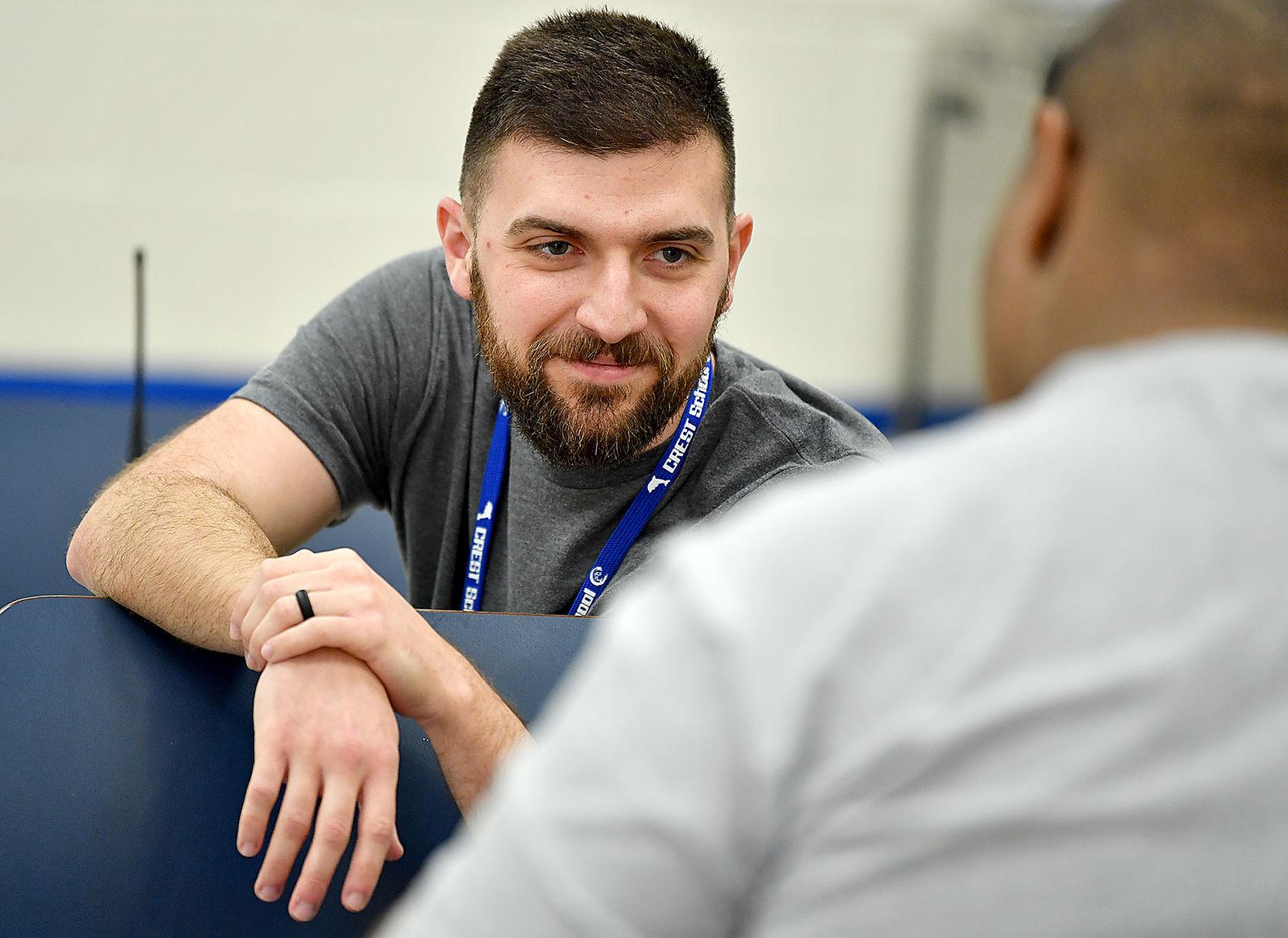 Exceptional students deserve exceptional teachers and staff. As a paraprofessional at Citrus Resources for Exceptional Students in Transition (CREST), Nick Catto is just that.

Catto has worked for six years in his current position and most recently, he was selected as the Citrus County School District’s School-Related Employee of the Year (SREY) at January’s Galaxy of Stars event.

As the sun set on Tuesday evening, shining stars lit up the sky.

“When Nick first started working at CREST, he worked with EBD high school students,” CREST principal Lee Mulder wrote in her SREY nomination letter. “From the beginning, Nick was able to use his honest talk and charisma to influence his groups for good.”

Catto himself went through the Citrus County School System. At Citrus High School, one of his history teachers encouraged him to pursue a career in education. At 24 years old, he made the jump.

“I originally went to college for it,” Catto said about his associate’s in early childhood education. He’s also a Registered Behavior Technician and is trained in Crisis Prevention Intervention.

Now 30, Catto has six years of experience under his belt. Typically, paraprofessionals work alongside a teacher. Due to his knowledge and success with students, Catto now works solo.

Currently, he has one student, 15-year-old Trevion Watkins. After Catto gets Watkins off the bus and they eat breakfast, “I pretty much have to gauge how he’s feeling,” he said. Typically, the pair work on ABC Mouse, where they practice lessons such as colors and numbers on the interactive program. 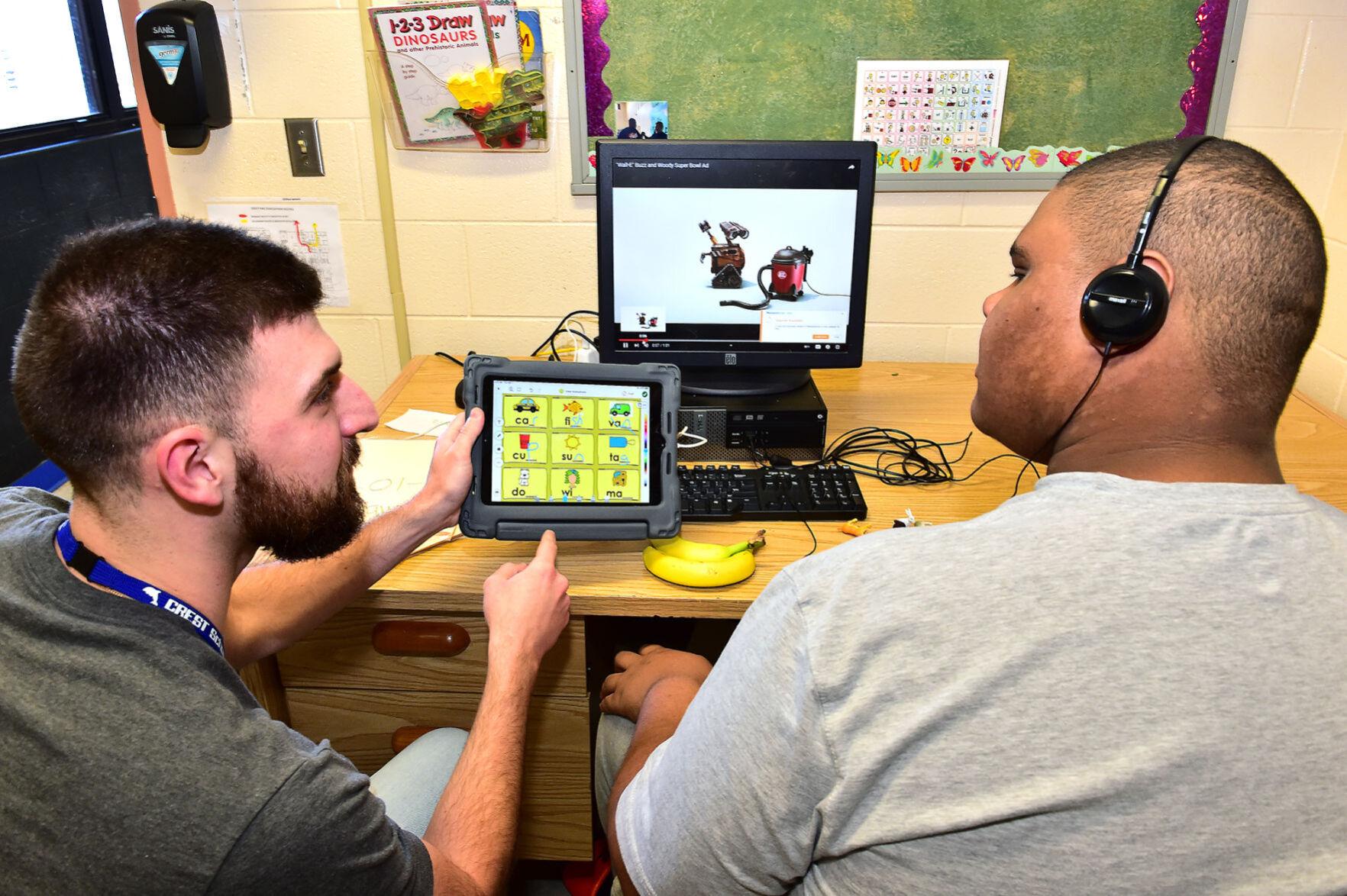 Catto also utilizes the Seesaw program for students, which allows educators to upload worksheets to students’ iPads. Next, of course, is lunch. Afterwards is some playground time or more schoolwork, depending on how Watkins is feeling.

At approximately 1:45 p.m., it’s time for Watkins to go home. However, Catto’s workday extends beyond the classroom. “I get on the bus with him,” he said.

Unlike many traditional teachers, Catto can have years of one-on-one time with his students. “A lot of kids I work with – it’s really hard to build relationships with them,” he said. “They’re really hesitant to trust people, so they lash out sometimes.”

However, Catto said students have been receptive to his methods. “Usually they come around.” Once they do, a strong bond is formed.

Although the schoolwork is important, Catto said, it’s equally as important to teach his students how to express their emotions in a healthy way. “That’s gonna be one of the things that helps them most in life.”

Catto’s philosophy for difficult days: Just weather the storm. He tells students, “I’m here for you. I’m not gonna go away.” 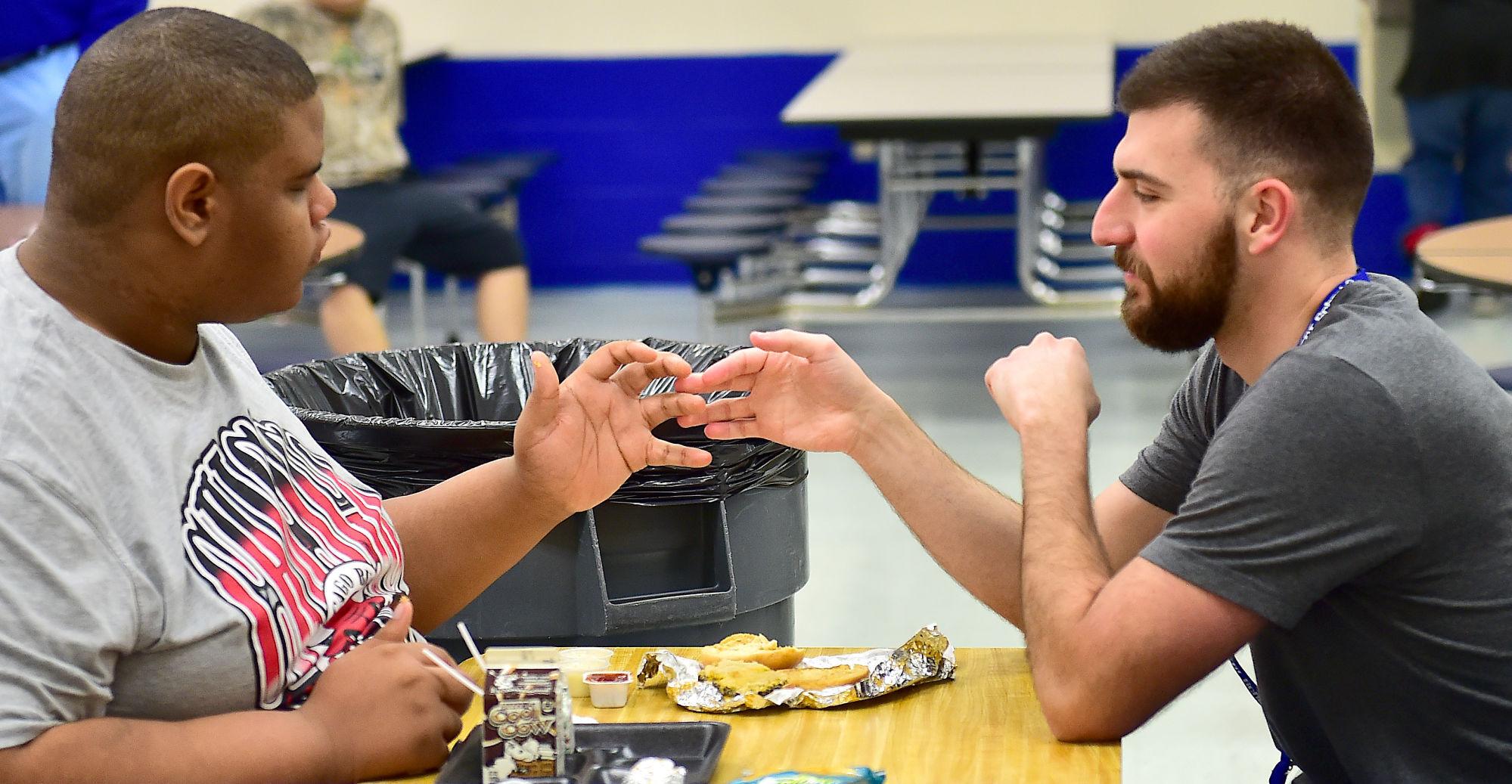 Nick Catto, a paraprofessional with the Citrus County School District, touches hands with 15-year-old Trevion Watkins at the CREST School. Catto says that the two will repeat the touch, sometimes dozens of times each day, and it is a way for him to gauge the teen’s stress level.

“I really love making the connection with them,” Catto said. With years of that connection, he said it can be extremely emotional when his students graduate.

Catto hopes winning SREY will highlight the great things being done at CREST. “I’m just happy that CREST can get the spotlight they deserve, because it’s an amazing place,” he said. “I’m just a part of the wheel.”

As for Catto, he’s in school to complete his bachelor’s degree at Central State University. In the future, he’s considering becoming a Board Certified Behavior Analyst and hopes to become a Teacher on Special Assignment.

Crude oil prices have surged amid growing concerns that the Russia invasion of Ukraine could impact global crude supplies, according to AAA.

Russia is the third-largest oil producing country in the world and the crude oil market was already tight before this conflict began.

But oil prices shot up Sunday night, when international trading began and, as of Monday, the U.S. price of oil was trading above $96 per barrel – an increase of about $5 from Friday.

“Unless oil prices reverse course, the pain at the pump is about to get even worse for Floridians,” said AAA spokesman Mark Jenkins. “There has been a lot of speculation about oil prices, and the high seems like a moving target.

“If oil lands at $95 a barrel for a sustained period of time, drivers could expect to see a 15 cent jump at the pump,” Jenkins added. “If U.S. oil reaches $100 a barrel, the total increase would be more like 25-30 cents per gallon.”

The Russian invasion isn’t the only issue keeping upward pressure on pump prices.

The busy spring and summer driving seasons are drawing near, which typically lead to strong fuel demand, AAA said.

Summer gasoline is moving into the market, which is more expensive to produce. Refineries are conducting seasonal maintenance, which can reduce normal gasoline production levels. If that wasn’t enough, there was an explosion at a Louisiana refinery last week.

Trustees of the Citrus County Hospital Board will meet Friday as part of negotiations to sell 5.4 acres along State Road 44 in Crystal River.

The hospital board posted the two wooded lots for sale for the past two years but received minimal interest from buyers, until now. The lots are bordered by Northeast 12th Avenue to the east and Northeast 11th Avenue to the west.

Maverick, the Orlando-based company which builds and operates hotels, is offering $450,000 for the two properties. Inverness Realtor Jim Morton told the trustees last week that the company has been looking for several months throughout Citrus County for potential locations for this project and others.

The hospital board owns Citrus Memorial Hospital on behalf of the public and leases the hospital, as well as affiliated properties, to Hospital Corporation of America. The two vacant lots at issue are not part of the lease with HCA.

Morton reminded the trustees during their board meeting last week that the potential buyer would still have to make a request to the Crystal River Council for zoning changes to accommodate a hotel/motel, and that would take time.

Trustees will have to decide how much time to give the developer to get its zoning changes and close the deal, during which time the properties would be off the market.

In addition, any information that’s generated by the due diligence that the potential buyer performs on the wooded property reverts to the hospital board. The trustees are likely to get responses to those requests Friday.

Trustee Rick Harper said it was important to give Maverick enough time to get its needed zoning change, otherwise it would simply ask for an extension, anyway.

Harper also said that getting an offer from an established developer with experience buying such properties and working with local governments for zoning changes was important and should be considered a positive in negotiations.

The trustees will discuss Friday any counter offers they have made or additional offers Maverick is making. The meeting will be held at the office of hospital board attorney Bill Grant, 123 N. Apopka Ave., Inverness.

A vehicle collided with this Citrus County School District bus occupied by 21 Citrus Springs Middle School students the afternoon of Tuesday, March 1 at a Hernando intersection. One student reported minor injuries, and at least occupant of the other vehicle was transported to hospital for treatment.

A vehicle collided with a Citrus County School District bus returning students home from school. Of the 21 Citrus Springs Middle School students riding the bus during the crash the afternoon of Tuesday, March 1, in Hernando, one reported minor injuries, school district spokeswoman Lindsay Blair said, adding the bus driver was also uninjured. According to Florida Highway Patrol (FHP), the bus was northbound on North Annapolis Avenue and passing through the intersection with County Road 486 when a white Toyota Venza traveling east on C.R. 486 ran the junction’s red light and struck the left side of the bus. FHP reported the 33-year-old Hernando man driving the Toyota suffered incapacitating injuries, and was airlifted to Ocala Regional Medical Center for treatment. A 4-year-old Hernando boy riding as a passenger in the Toyota suffered possible injuries but first responders did not take him to hospital, according to FHP.

The 35th annual Floral City Strawberry Festival will be held on March 5 and 6 this year in Floral Park, Floral City. Live music will be played from the main stage with a full performance lineup. Saturday will begin with Southern Express Band from 10 a.m. to 1 p.m., followed by headliner Xhale from 2 to 5 p.m. Sunday’s lineup includes Lonesome Ride from 10 a.m. to noon with headliner Rick Lynn and Clint Byron closing out the festival from 1 to 4 p.m. All the favorite events will be back this year as well, including the pie eating contests and prince and princess pageants. Festival hours are 9 a.m. to 5 p.m. on Saturday and 9 a.m. to 4 p.m. on Sunday. Entrance fee is $5 for adults, children 12 and under are free. Free parking is available at the Citrus County Auditorium, 3610 S. Florida Ave., Inverness. Free shuttles will be provided. For more information, visit GoStrawberryFest.com or search “Floral City Strawberry Festival” on Facebook.

The Citrus County Board of County Commissioners (BOCC) is seeking applications for the Code Review and Appeals Board (CRAB). They are seeking four qualified regular members and one alternate position to fill four-year terms that will expire on Jan. 31, 2026. CRAB meets as needed. It reviews any locally proposed technical amendments to building standards or regulations and makes recommendations to the BOCC. It also hears appeals of code interpretations and makes decisions on variations and modifications concerning technical codes and standards. Applications can be accessed online at: citrusbocc.com/boardapplication. Completed applications should be sent to Citrus County Administration, 3600 W. Sovereign Path, Suite 267, Lecanto, FL 34461.

According to Florida Highway Patrol (FHP), the bus was northbound on North Annapolis Avenue and passing through the intersection with County Road 486 when a white Toyota Venza traveling east on C.R. 486 ran the junction’s red light and struck the left side of the bus.

A 4-year-old Hernando boy riding as a passenger in the Toyota suffered possible injuries but first responders did not take him to hospital, according to FHP.