If you haven’t driven by the U.S. 98 and County Road 491 intersection in awhile, get set for a surprise.

Construction of a roundabout has begun and it’s a bit unrecognizable with new traffic patterns and huge mounds of dirt.

To help matters, the Florida Department of Transportation (FDOT) on Wednesday made operational a new traffic signal, which had been in flash mode since late November 2021.

“Drivers should be alert to the new, temporary signal and be prepared to stop in all directions, said FDOT representative John McShaffrey. “The signal will be used to control traffic safely until construction of the new roundabout is completed in spring 2023.”

McShaffrey said drivers should be alert to traffic shifts on U.S. 98 in the project area and drive within the posted 30 mph speed limit.

Two weeks ago, FDOT closed County Road 491 (also called Citrus Way) on the south side of the intersection through around December 2022. It’s completely blocked off.

Public sentiment was high against installing a roundabout at that location, given the high rate of speeds of trucks. But the Federal Highway Administration said such traffic-calming devices reduce high-speed right-angle crashes and resulting fatalities.

St. Augustine-based Watson Civil Construction is doing the work on the $3.5-million project.

Tier Four Business Solutions worker Scott Gustafson installs cable Tuesday, March 29, at the new hotel under construction on South Seminole Avenue in downtown Inverness. The project is expected to be complete in July.

It’s doubtful that visitors to the future Inverness downtown hotel will be aware of the real estate and construction headaches its owner and builder had to endure to get the three-story structure built.

The latest is the rocketing material costs, labor shortage, and supply chain delivery problems that have plagued most construction across the country. Hotelier Dr. Paresh Desai, of Citrus County, has not gone unscathed with his latest Inverness project as he waits for materials that have pushed the hotel’s cost up about 15 percent and pushed back its opening at least a month and maybe two.

But sitting in the hotel construction trailer next to the partially completed hotel to meet with DI Construction, LLC superintendent John Dungan, Desai is optimistic about the 72-suite hotel and its progress despite industry problems.

“We are struggling like most of the builders,” Desai told the Chronicle. 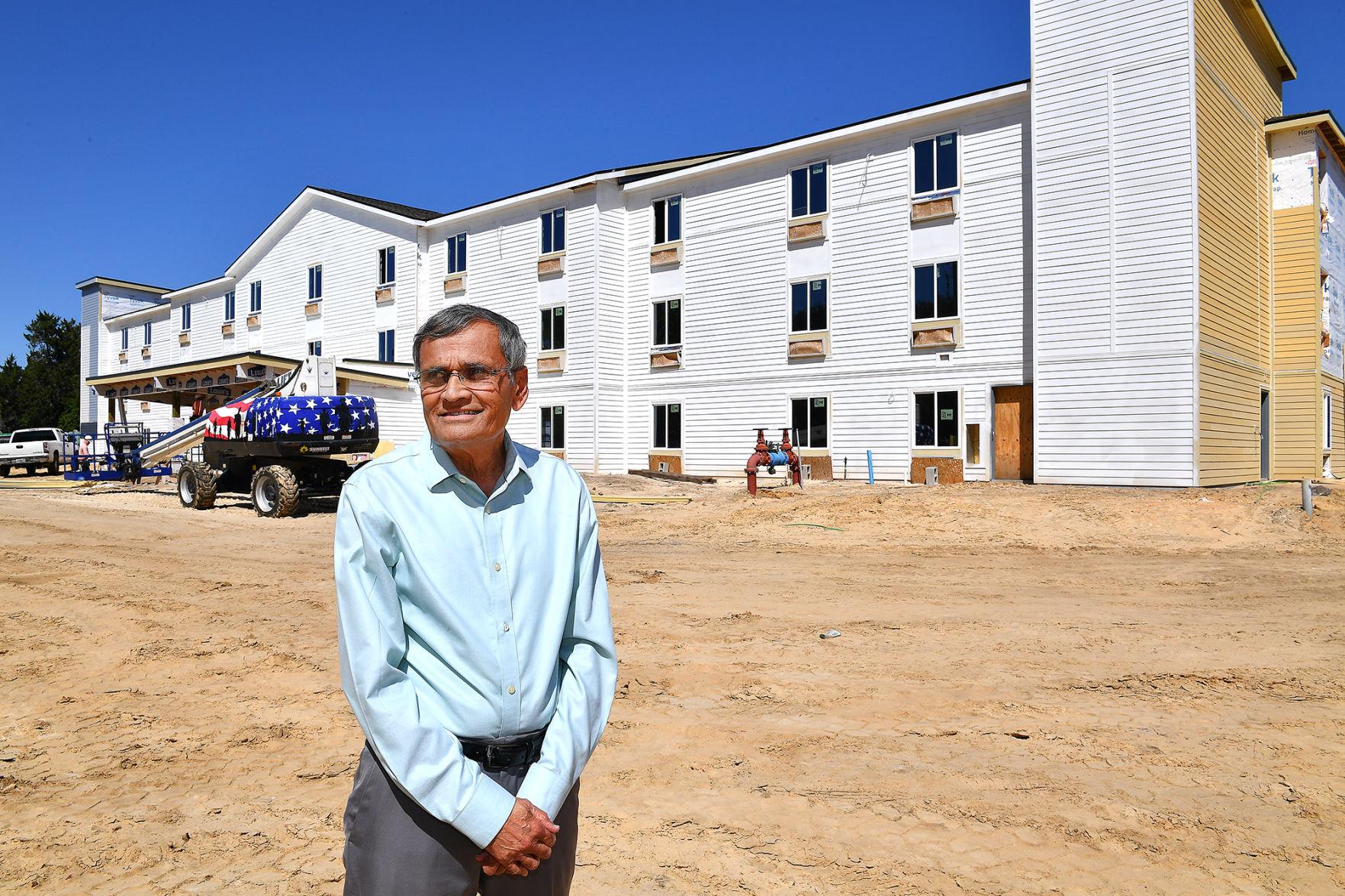 Dr. Paresh Desai is the driving force behind a new hotel being built in Inverness.

But Desai said he included a cost buffer that will be enough to cover rising material and labor costs.

And banks are working with builders about repayments, knowing there have been construction delays, he said. But Desai smiled and said he didn’t think this project would need a meeting with the bank.

“I hope we don’t get to that level,” he told the Chronicle.

Originally thinking the hotel would open in June, he now thinks July or August are better bets.

“For the hotel to be open to the public it has to have everything,” Desai said.

That means every item that makes up a hotel, from soap holders in the showers to bedroom nightlights have to be there, he said.

But that’s also creating problems for people like Dungan.

That’s often because work in one area of the hotel rooms has to stop because work can’t continue until materials arrive.

For example, Desai and Dungan ordered the kitchen countertops for each suite from Vietnam, but they haven’t arrived yet. Dungan is thinking they will come in May. But plumbers can’t install kitchen hardware until those countertops arrive and are installed. 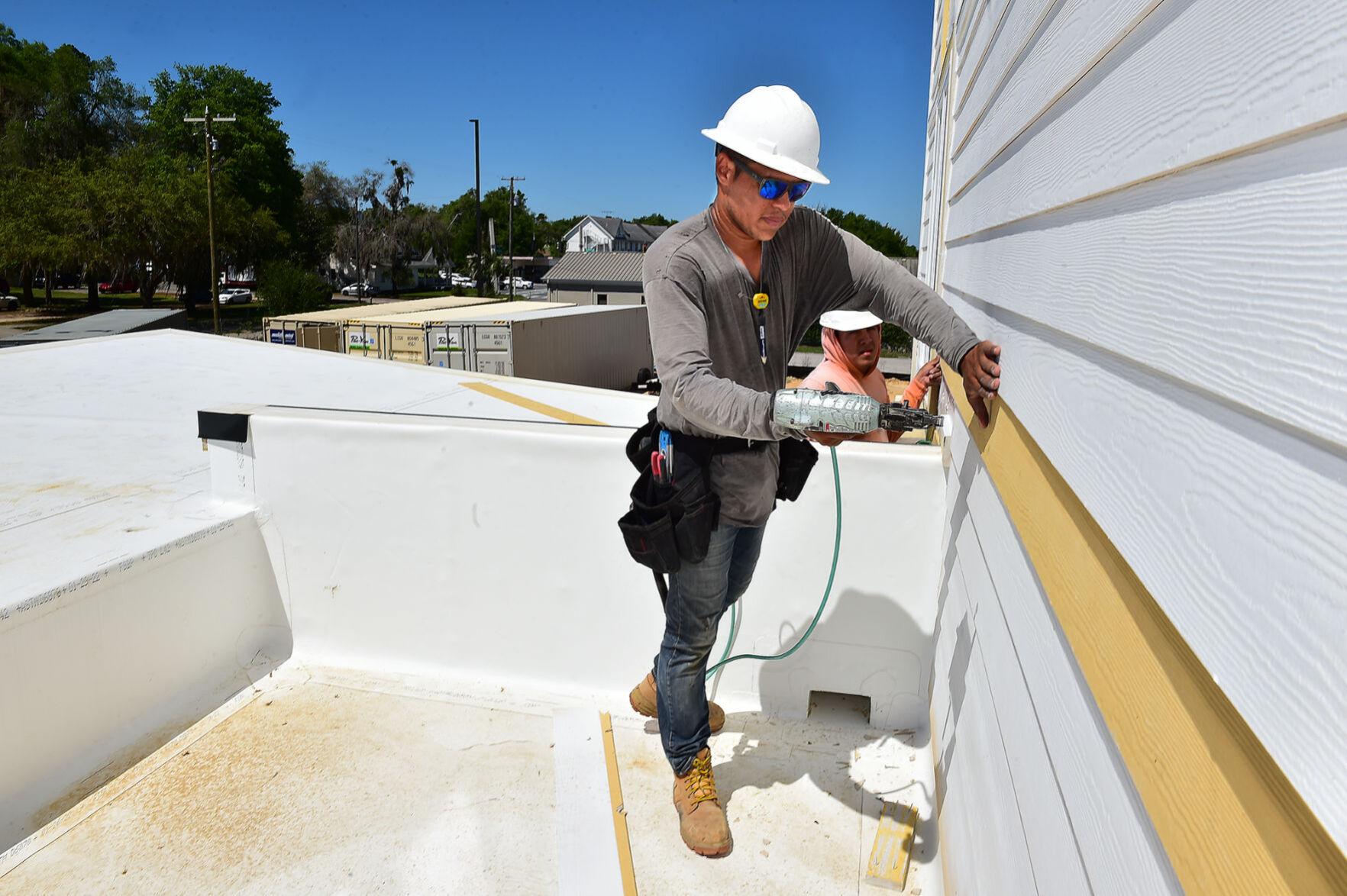 SCE Exteriors worker Raniel Marques works on attaching concrete-board siding onto the exterior of a new hotel in downtown Inverness Tuesday, March 29. The three-story hotel is expected to be complete in July.

The same is true for bathroom sinks. Dungan is hoping they arrive in the next few days so work can continue in the bathrooms.

Dungan said that while the COVID-19 pandemic has sharply decreased in the United States, other countries with factories that make many of the construction materials are still struggling with the disease and have had to close some manufacturing.

To complicate construction more, Dungan said there are still significant delays with shipping from other countries. That means while your countertops may have arrived, the ship’s crew in Los Angeles is waiting for permission to unload them. Then, customs officials have as long as a month to inspect the shipment, he said.

“Every time you’re waiting for something,” Dungan said. “And you pull your hair out every time you turn around.”

But both Dungan and Desai said this is happening all throughout the country and the Inverness project is not unique.

Desai said he has no regrets about the hotel. He expects the hotel to enjoy 80 percent to 90 percent occupancy when it’s completed and will cater to visiting HCA Florida Citrus hospital staff as well as the general public.

The project has always had its problems, though, which has given Desai a thick skin.

The two-acre site originally belonged to the Citrus County Hospital Board, which owns HCA Florida Citrus hospital, and leases it to Hospital Corporation of America. Along with the hospital, the lease included the hospital campus grounds.

In order to buy the two acres, Desai had to work with HCA to peel the property away from the lease and then meet with the Citrus County Hospital Board and get its trustees to agree to the sale. The process took two years.

But there’s been a silver lining in all this, the two men agreed.

When it comes to the city’s only future hotel, Desai and Dungan said Inverness officials could not have been more helpful.

Inspectors arrive on time and if there’s a problem they work with the builder to find a solution rather than just shut down work, they said.

“It flows,” Dungan said about working with city building officials. “You don’t get caught up in the hoopla.”

Inverness officials have been the easiest to work with when compared to any of his other hotel projects, Dungan said.

Desai said that City Manager Eric Williams gave him his cellphone number so if there’s a problem, whether on a weekday or weekend, Williams can get involved to help find solutions.

Desai also commended the county sheriff’s deputies who have made the site safe and despite a shortage of materials, there have been no thefts from the hotel project.

Local
Nothing foul about this show, it's strictly for the birds
HSachewicz / Photos by Hannah Sachewicz / Chronicle Reporter

Lecanto High School senior Elise Leturno is the 2022 Grand Champion exhibitor in the Pen of Meat Poultry exhibition. She is pictured with her White Leghorn Bantam, which won a blue ribbon in the Rose Comb Clean Legged Bantam exhibition.

Pens upon pens of poultry were entered in the Citrus County Fair by local youths on Sunday afternoon.

According to Marnie Ward, 4-H youth development extension agent, poultry is arguably the most difficult showmanship. Between large fowl poultry and bantam poultry, youths are expected to have an extensive knowledge on breeds.

During shows, judges can ask exhibitioners up to 10 questions about their bird, such as class, variety, common parasites and how to treat them. “There’s a lot more that goes into poultry knowledge,” Marnie said.

One of the categories in poultry showmanship is the Pen of Meat exhibition, which Marnie said had a record number of entries this year.

Lecanto High School senior Elise Leturno was named Grand Champion for Pen of Meat Poultry. “This week, I have several competitions,” she said.

Aside from her Pen of Meat Poultry, Leturno showed her blue ribbon White Laggard Bantam in the Rose Comb Clean Legged Bantam exhibition.

Bantams are smaller versions of full-sized birds, Leturno explained. “Her eggs will also be smaller.” 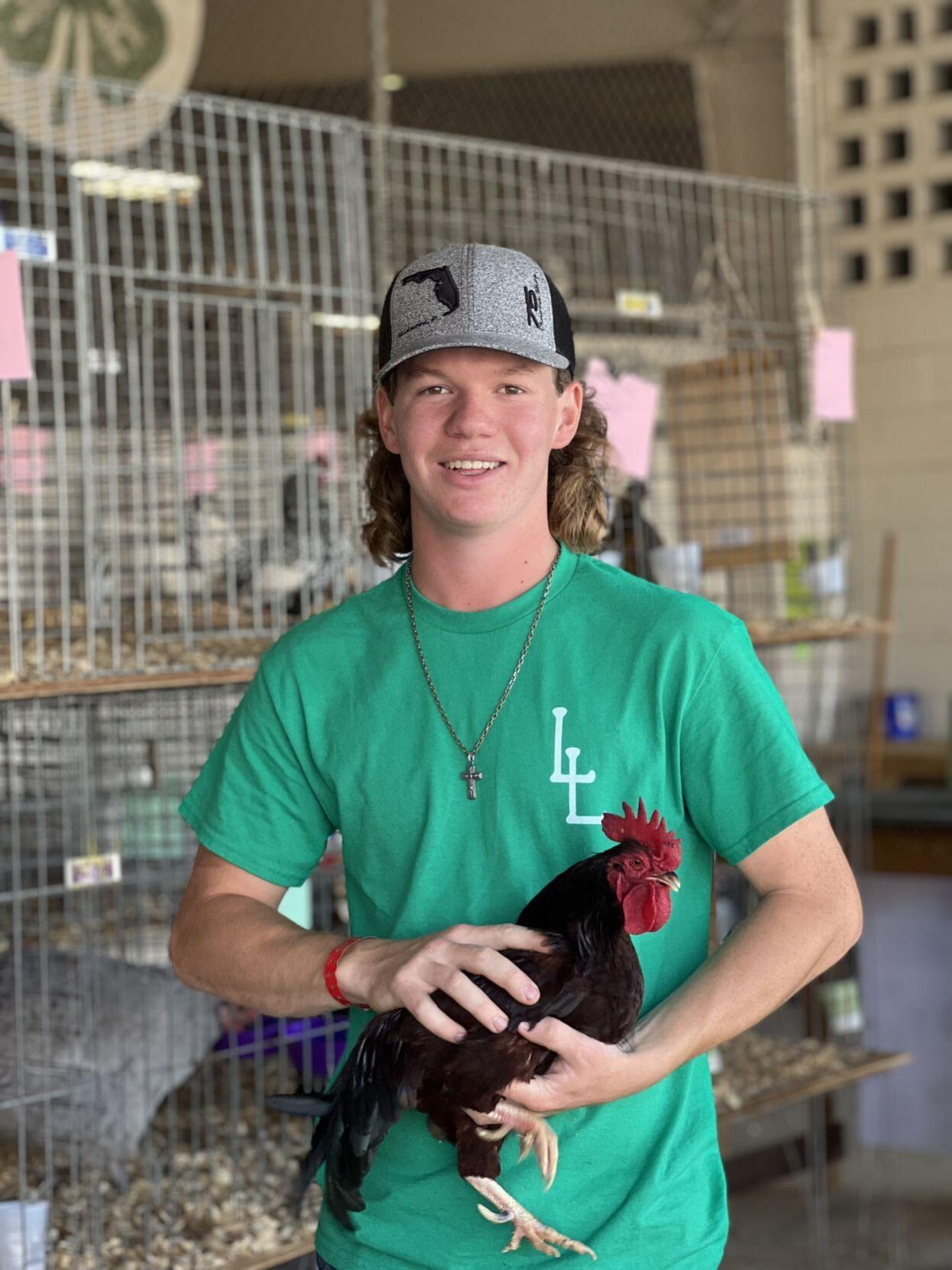 Citrus High School junior Will Ward is the 2022 Reserve Grand Champion exhibitor in the Pen of Meat Poultry exhibition. He is pictured with his Rhode Island Red, which was awarded a blue ribbon in the Single Comb Clean Legged Bantam exhibition.

“They are selectively bred to grow faster,” Will said.

In addition, Will’s Rhode Island Red was entered in the Single Comb Clean Legged Bantam. “He didn’t win, but he got a blue ribbon.” Will also won the Poultry Senior Showmanship on Monday and exhibited his steer.

Marnie said a typical Grand Champion Pen of Meat Poultry can auction for up to $700. 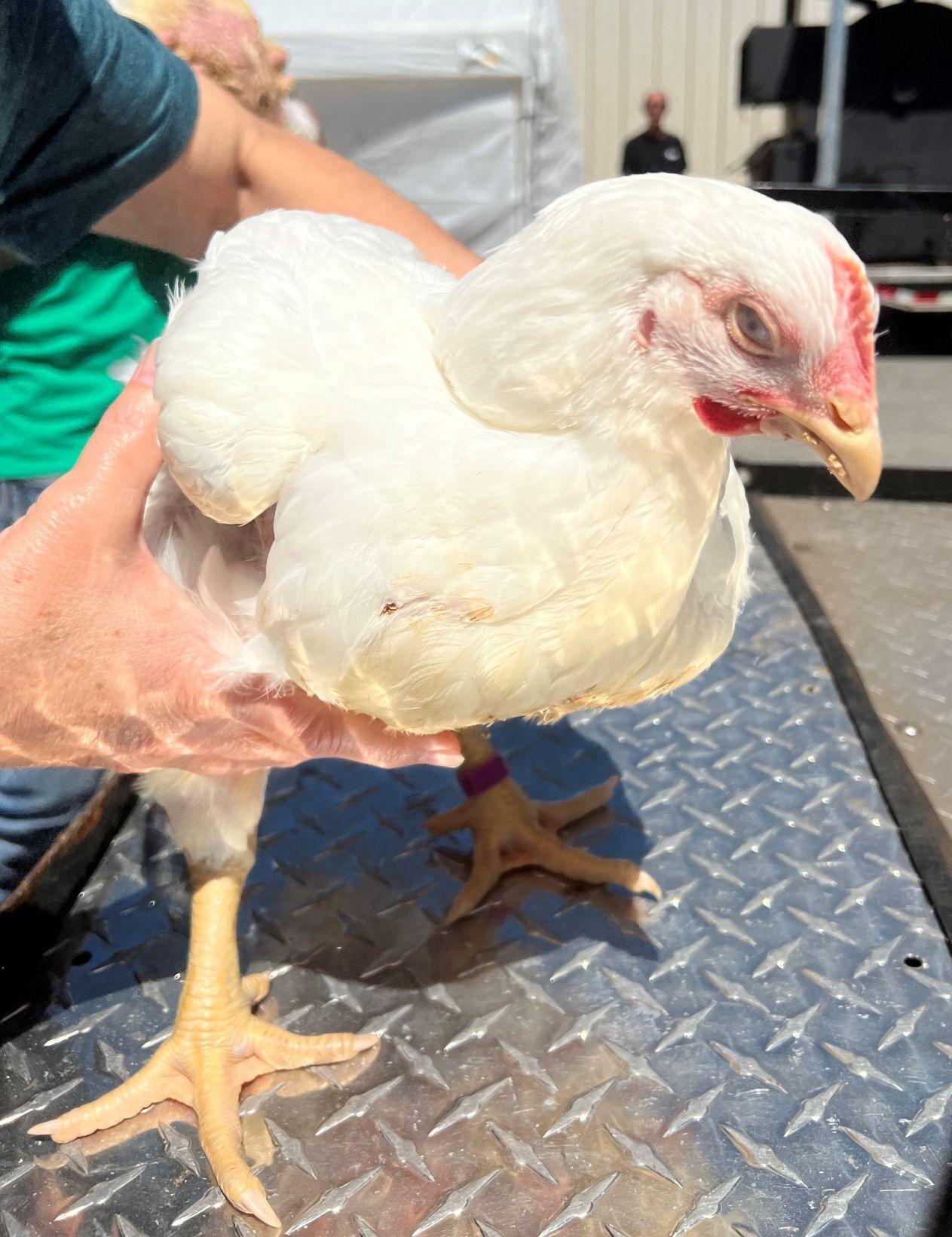 Marnie Ward holds one of Elise Leturno’s Grand Campion Pen of Meat Poultry. The Cornish Rock is a hybrid chicken, selectively bred to grow faster, according to Will Ward.

In addition to the livestock exhibitions, Marie said the fair is a chance for youths to show off what they’re best at – whether it be public speaking, baking or sewing.

“All kinds of opportunities come out of the fair,” Marnie said. Fair graduates leave with a toolbox of skills they carry for life.

For more information about the fair, visit citruscountyfair.com.