After two-and-a-half hours of debate, the board took no action on this hot-button issue and said it’s up to county commissioners to put it on their agenda if they choose to discuss it further. 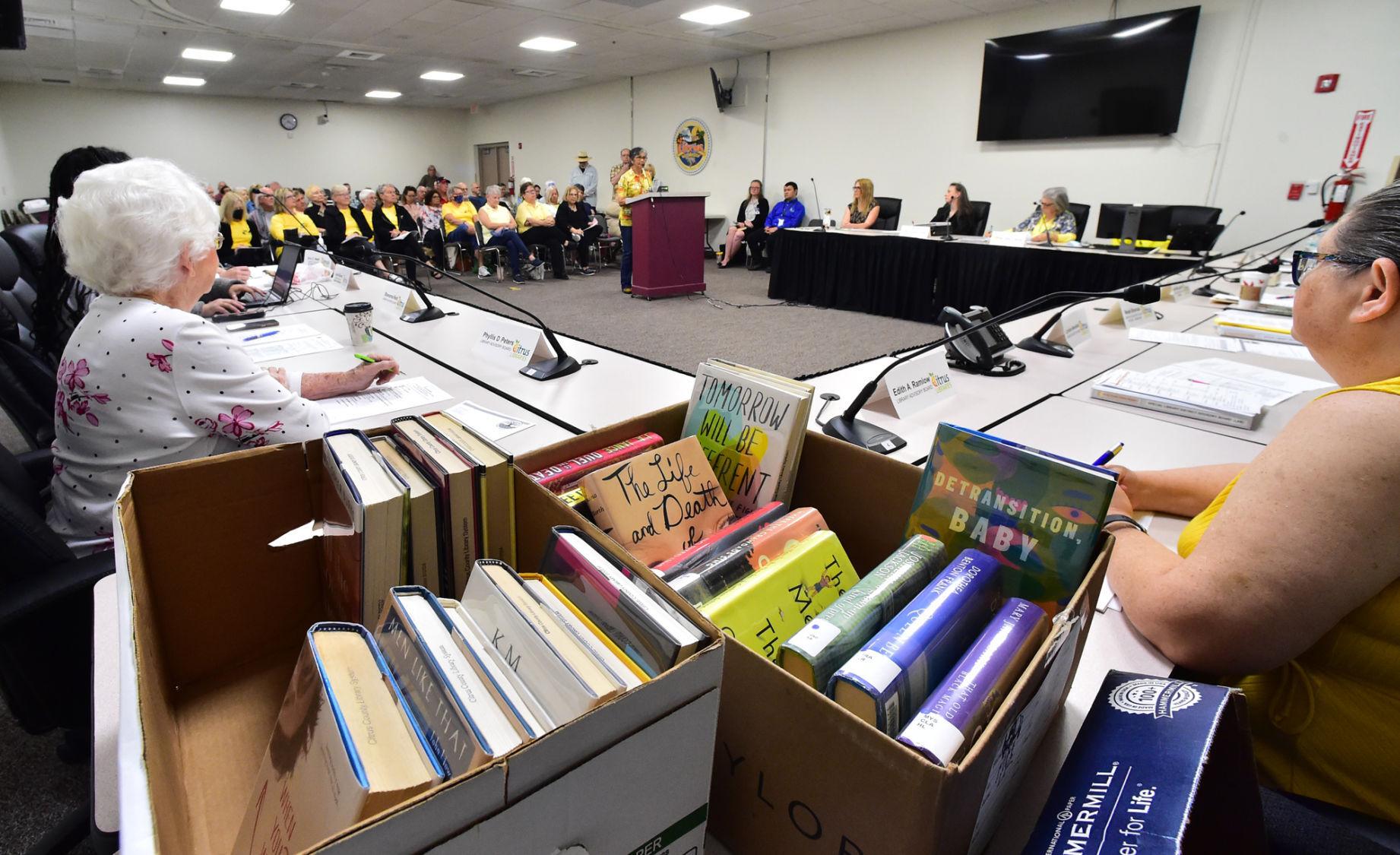 A box of books sits at the ready on the desk of the Special Library District Advisory Board Tuesday, March 22, at the Lecanto Government Center. Discussions Tuesday centered around Pride Month displays at county libraries.

Board member Neale Brennan reminded the crowd that advisory members do not make policy and serve only as liaison between county commissioners and the public. The public expressed their views, she said, and that fulfills the board’s duty.

The library group Tuesday almost took action. Member Elaine Kleid’s motion to have Library Services Director Eric Head update and clarify the current policy regarding displays, with a specific focus on the LGBTQ display, was defeated.

Board Chairwoman April McLaughlin said the group will likely discuss at its next meeting whether to go ahead with another Pride Month this June.

Those displays prompted a firestorm of controversy from people who believed the library was using taxpayer dollars to promote an inappropriate sexual lifestyle and was indoctrinating children.

Many of the 70 people who showed up at Tuesday’s advisory board meeting expressed those views. Others said the displays were innocuous, were not injurious to children and were meant to educate, not promote.

The request for the advisory board to reconsider putting up future Pride Month displays came from John Labriola of Inverness who has lobbied against using taxpayer dollars to promote what he calls a sexualized political agenda.

“This is a political agenda that’s being promoted at taxpayer expense,” Labriola told the board.

Labriola said afterward the advisory board’s non-action was expected because county commissioners shouldn’t have punted their duty to make policy to begin with.

Comments were strong on both sides of the aisle.

“The LGBTQ agenda doesn’t deserve a special display,” Robert Tripp of Homosassa said. “Should we promote it? No. It’s an agenda that’s political.”

Roberta Corddry of Crystal River told the board she was listening to the anti-display comments and was getting madder and madder.

“I am a gay citizen and I am a Christian,” Corddry said. “You can’t turn someone gay by reading a book, believe me. It doesn’t happen. I just think it’s wrong to force someone’s views on the rest of us.”

Board member Edith Ramlow said it all comes down to balance.

“There should be other viewpoints, other book displays that are a balance to the types of book displays that were shown in June – whether there’s a display in June, a display in October for ‘Life Month,’ displays in April for ‘Child Abuse Prevention Month,’ or any other day or month of the year that speaks to families of any side,” she said.

County commissioners met later Tuesday and didn’t seem inclined to revisit an issue they thought was put to rest on Jan. 4. At that time, the board voted 3-2 to keep the existing policy in place. Commissioners Ron Kitchen Jr. and Scott Carnahan lost their bid to amend the policy to prohibit sexual orientation displays.

Commissioner Ruthie Schlabach said the process is being followed and is confident that county staff will review it if there are any perceived problems.

Commission Chairman Ron Kitchen Jr. repeated his view from the Jan. 4 meeting that displays of any sexual orientation have no place in taxpayer-funded libraries. If patrons want more information, books are available, he said.

“(These displays) were meant to draw attention and promote something,” Kitchen said. “That’s why we do displays. That puts government support behind that display.”

Kitchen said he cannot revisit the Jan. 4 vote because he was on the losing end and prohibited from doing so.

Citrus High School sophomore and band member Lucas Delgado practices on a euphonium Monday in the Citrus High band room. Delgado and his bandmates are preparing for the State Concert Music Performance Assessment April 23 at University of Florida’s Phillips Center.

“Everything else falls into those two rules,” CHS band director Kaleb DuBose said. “Anything you could ever think of.”

With a combination of hard work and a positive environment, the CHS concert band is preparing to compete at the state level for the second time in approximately 30 years.

On April 23, they will travel to University of Florida’s Phillips Center for the State Concert Music Performance Assessment (MPA).

This competition follows their “A” performances at the District MPA. DuBose explained the scope of the district competition.

First, the band played three pieces, judged by three professional music educators. After playing on stage, the band entered a separate room with another judge, where they were shown brand new pieces.

The band was allotted just a few minutes to look over the piece before playing. “They have to look at it – they can’t play it,” DuBose said.

During biweekly practices, the band rehearses their three performance pieces and once per week, DuBose said he gives the band a piece to sight read.

During practice, “I like to pick harder music,” DuBose said. That way, competitions are much easier.

Seventeen-year-old senior and band captain Amber Losciale plays alto saxophone for the concert band. “It was very nerve wracking,” she said about districts.

Losciale said she had a solo in “Songs of Old Kentucky,” one of their district pieces.

“I was really scared because I didn’t want to be the reason we didn’t go to states,” Losciale said. “From the recording off the judges tapes, I feel like I did a good job.”

As band captain Losciale said her job is to be the representation of what the band should act like. “I need to be as best of an instrumentalist as I can be.” 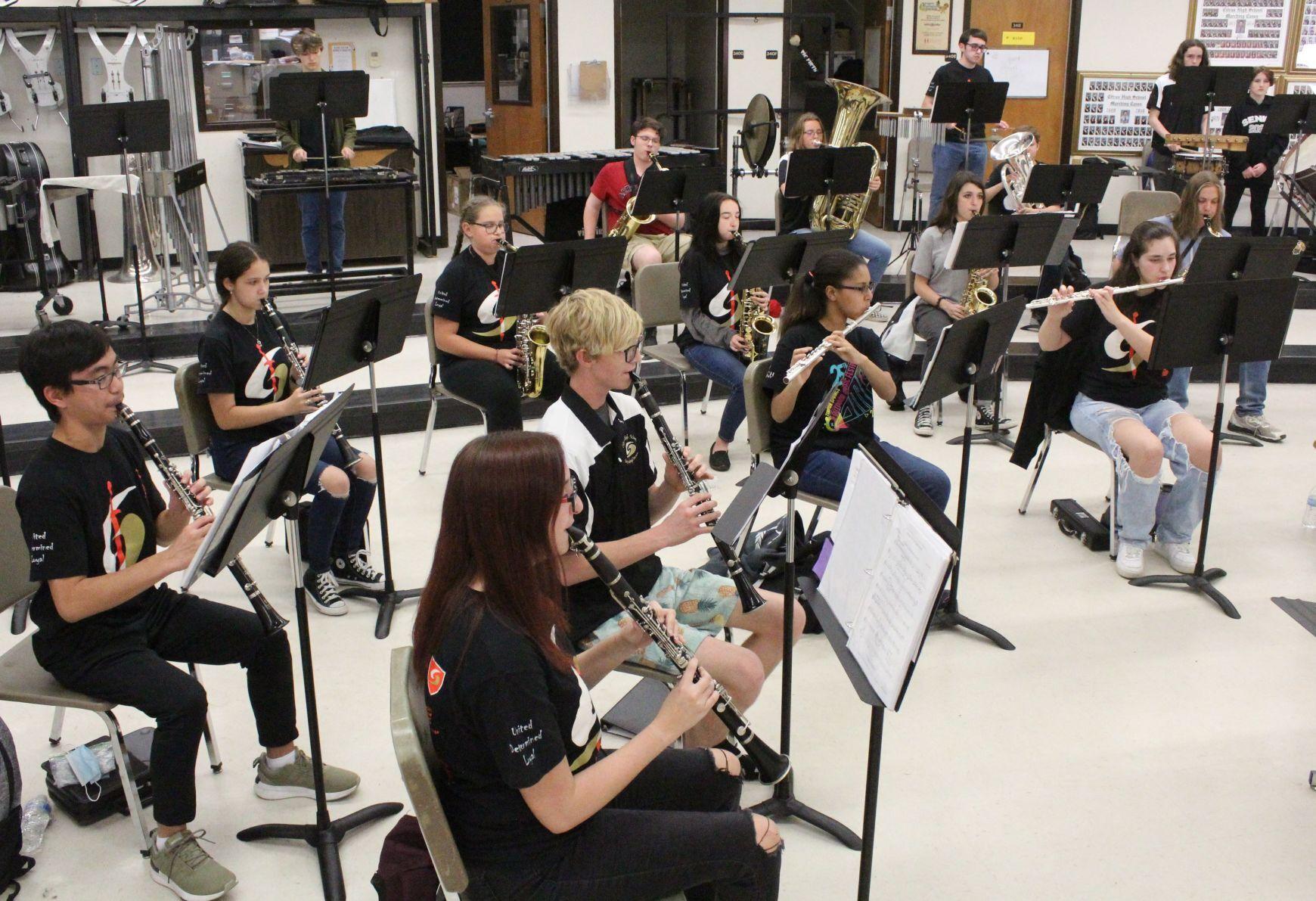 When Watts found out the band was going to states, she said she couldn’t believe it – she never thought she’d see the day. “It just felt really good – like the hard work did matter.”

Watts said band is one of the reasons she’s able to have confidence. “I always wanted to be a doctor, but I wasn’t going to,” she said. “Drum major gave me the confidence to be the one in charge.”

Next year, Watts will attend the University of South Florida’s pre-medical program. She also wants to join their Herd of Thunder (HOT) Band.

Welsand is a little nervous about the state competition, especially since the judging becomes more difficult. “It’s gonna be really hard to improve enough to get to that level, but I think we can do it,” she said.

At the State MPA, the band will have to present three pieces to the judges. DuBose said he’s changing two of them to keep the students engaged. Unlike the District MPA, there will be no sight reading portion. 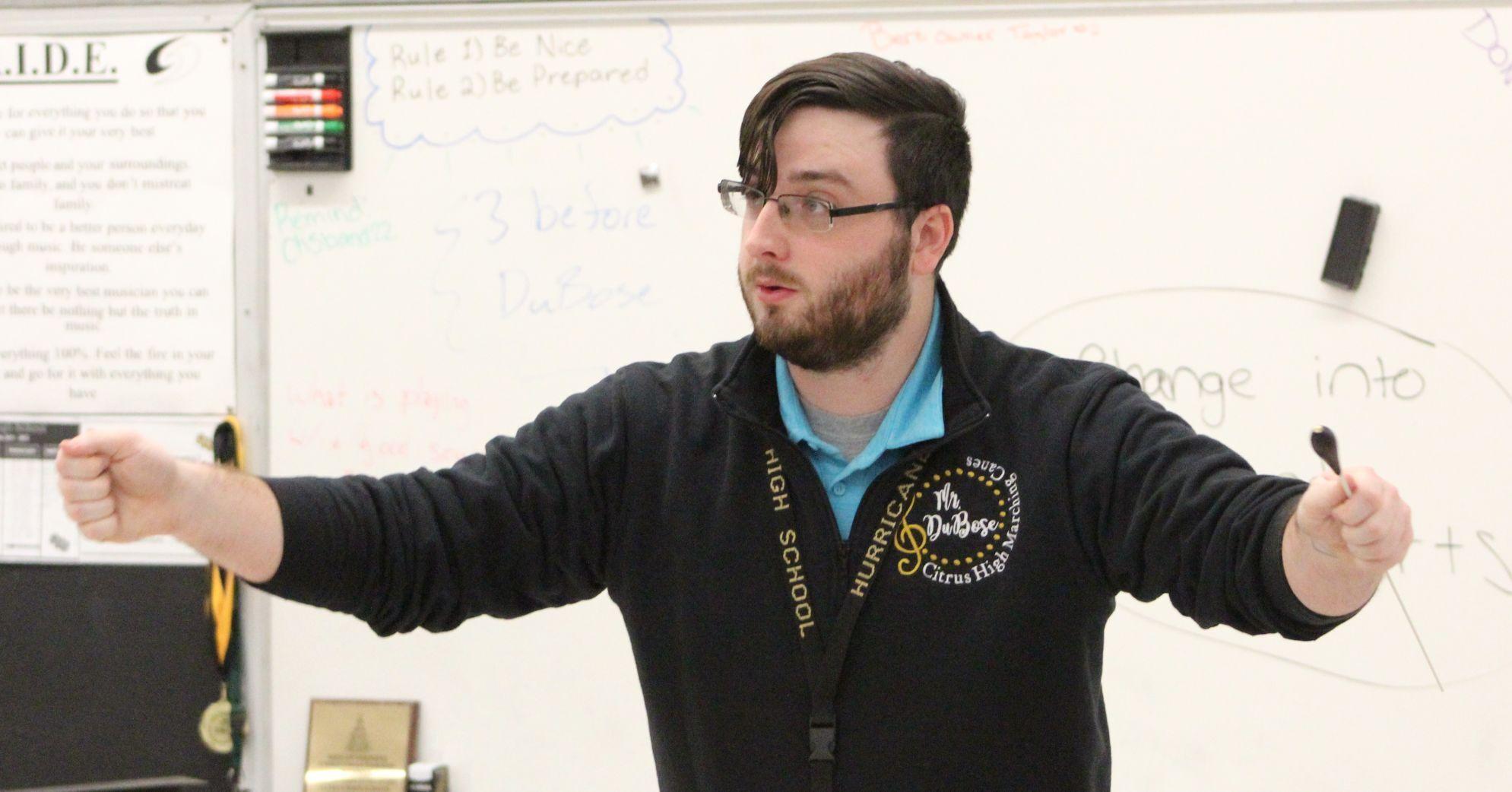 Before DuBose became band director, CHS was scoring D’s on stage. During his first year, the band got straight B’s, then COVID-19 hit and there was no competition. This year, they scored straight A’s.

Instrumentally, the band has made a huge improvement. However, what makes band extraordinarily special, according to DuBose, is the character development they go through.

“I have not met a better group of kids that are more driven than the kids in Citrus County,” DuBose said. “There’s something in the water here.”

Citrus County Judge Bruce Edward Carney is looking to hold onto his judgeship for another term.

According to the county election's office, Carney on Tuesday, March 22, pre-filed his candidacy in the 2022 election for the second county judge group, which Gov. Ron DeSantis appointed Carney to in October 2019 after Florida lawmakers funded the position.

County Judge Mark Yerman’s office is also up for election this year. Yerman plans to retire when his six-year term finishes at the end of December.

That was the assurance from the nonprofit’s Tallahassee lobbyist and Citrus County’s mental health advocate to the Citrus County Hospital Board from which it will ask for funding to pay for the bulk of the project.

“We’ve done a really poor job ... at keeping you (informed),” McGee said, during the board trustee meeting this week.

LifeStream’s plan is to build a Baker Act facility at its new Lecanto campus with funding from both the Citrus and Hernando county commissions. McGee told the Chronicle it was important to keep communicating with the hospital board because LifeStream will ask the board for financial help later in the process.

But for positive news, McGee told the board that LifeStream now has commitments from both the Hernando County Commission and Citrus County Commission in which each gives $2 million toward the project. McGee estimates the project will cost $12 million, so LifeStream would come to the hospital board for the remaining money or to give as much as it could.

McGee told the Chronicle that lawyers from each county are currently drafting contract agreements for review. Under the plan, LifeStream would also bring Hernando County’s Baker Act clients to the Lecanto campus for mental health evaluation.

Part of the plan in bringing LifeStream to Citrus County and the county ending its contract with its former mental health and addiction provider, The Centers, hinged on the county wanting its own Baker Act facility, something the Centers couldn’t deliver.

Several months after Lutheran Services of Florida Health Systems, which contracts with service providers on Florida’s behalf, made the announced change, LifeStream took over the job.

That was four years ago, but still no Baker Act facility.

However, LifeStream has increased mental health service lines in Citrus County to include mental health intervention at county schools and an evaluation center in Beverly Hills to determine if a patient needs Baker Act services.

Currently, Baker Act patients are transported to Leesburg where LifeStream is based and operates a Baker Act facility.

LifeStream is paid about $4 million from the state for its services here. Of the 1,800 people from Citrus County evaluated for potential Baker Act services, Life Stream Executive Vice President Rick Hankey told the Chronicle in February that more than 1,200 were taken to the Baker Act facility in Leesburg.

But there has been a financial sticking point when it’s come to the proposed Baker Act facility and wanting money from the Citrus County Hospital Board, which has the deepest pockets for such projects.

The hospital board owns Citrus Memorial Hospital and leases it to Hospital Corporation of America. It uses some of the lease money to fund local charities that provide health care services.

But here’s the problem.

Hospital board members want assurances that if LifeStream loses its mental health contract with the county, the Baker Act properties would revert back to the county taxpayers.

LifeStream officials said that they can’t give up the facility once it’s been built and LifeStream is operating it. For its part, LifeStream bought the Lecanto property, investing $1.2 million of its own money and is likely to spend more.

McGee said he is confident he and the other investors can reach a compromise.

He told the Chronicle that typically when the state issues a grant for a facility, for example, it comes with a 20-year lien. If the receiving entity can no longer operate the facility, it must pay a prorated amount back. So, if the entity stops using the facility after 10 years, it must pay back half of the money it cost the state for the facility. The amount continues to diminish over time until it fully belongs to the entity which used the facility.